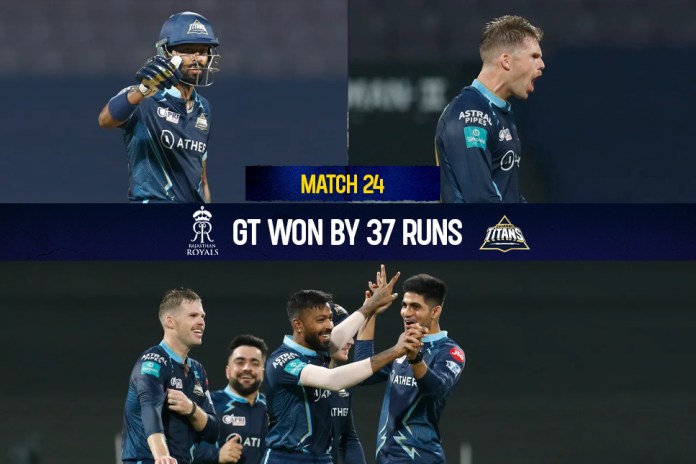 Jos Buttler put RR off to a flying start even though Devdutt Padikkal was removed in the 2nd over. He took on Yash Dayal, hammering 24-ball 54. But GT kept chipping away with wickets to keep Gujarat Titans in the fray.

Sanju Samson looked threatening but was removed while RR’s Ashwin gamble did not pay off and Rassie van der Dussen didn’t do well either.

The old Hardik Pandya returned and hammered Rajasthan Royals bowlers in absence of Trent Boult, taking the Orange Cap with a fine 87-run knock off 52. Thanks to his knock besides Abhinav Manohar’s 43, Gujarat Titans set a 193-run target after sent to bat first.

However, Gujarat Titans did not have the best of the starts as Matthew Wade continued his poor run and departed in the 2nd over while Kuldeep Sen removed Vijay Shankar in the third over. Shubman Gill also departed after the powerplay.

But then on, it was Hardik Pandya and Abhinav Manohar’s show. The two stitched together an 86-run stand besides David Miller’s 14-ball 31 helped Gujarat Titans to 192/4.

Rajasthan Royals captain finally broke his toss jinx. He won the toss and opted to field first. Gujrat Titans won’t be too unhappy about it. Hardik Pandya’s side will be gunning for the top spot. But Samson has been dealt a blow with Trent Boult ruled out with injury while GT have persisted with Matthew Wade.

Team News: Trent Boult misses out with injury for RR. James Neesham comes in as replacement. For GT, Yash Dayal makes debut while Vijay Shankar comes back in place of Sai Sudarshan.

#OnThisDay in 2013, Sanju made his #IPL debut. 𝘚𝘬𝘪𝘱 to 9 years later…💗 pic.twitter.com/uWUN4teSYa

@18:50: Matthew Wade is warming up for GT but will he make it to the Playing XI?

@18:45: Stats: Sanju Samson has lost four tosses but has won three matches to be on top.

18:30: The match is set to be played on a used surface with a lot of runs expected. RR vs GT Live Score: Why this is a top of the table clash?