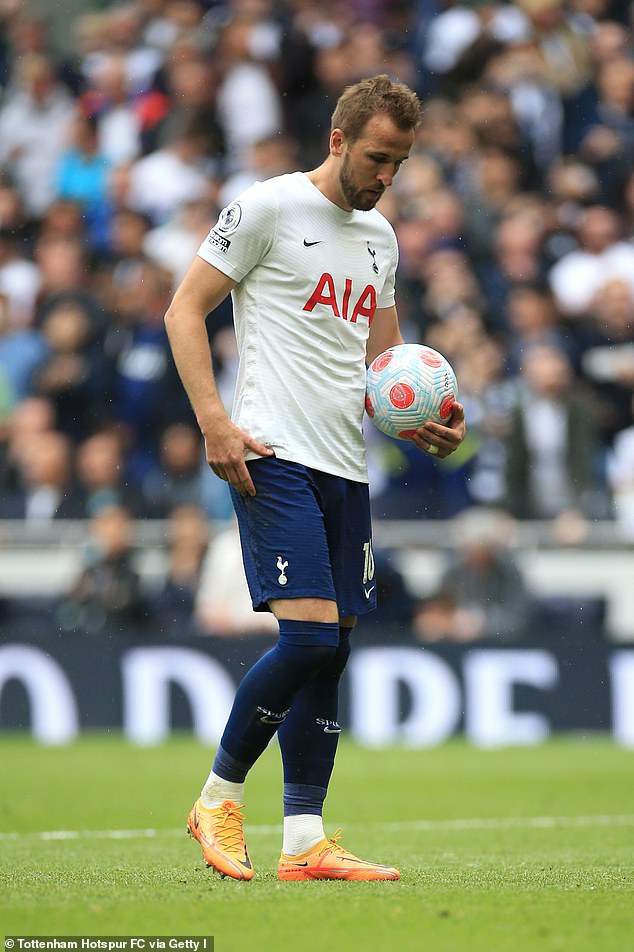 Tottenham could be without Harry Kane for their crucial final match of the season as they chase Champions League qualification as he is ‘unwell’ – but the club have denied there has been a food poisoning outbreak following claims by Gary Lineker.

There were fears that history may be repeating itself after Lineker said on Twitter that he had heard some of the squad had been struck down with food poisoning.

Spurs travel to Norwich needing just a point to confirm their place in the top four ahead of North London rivals Arsenal, but their chances of sealing Champions League qualification have been dealt a potential blow by potential absence of Kane.

Harry Kane could miss Tottenham’s trip to Norwich, dealing a blow to their top-four hopes

Hearing there’s a food poisoning outbreak at @SpursOfficial. No, i am not joking.

Kane pulled out of a media appearance on Friday afternoon as a precaution and he will be assessed ahead of the game on Sunday.

The food poisoning claims echoed the infamous ‘Lasagne-gate’ prior to the final day in 2006, which cost Spurs a place in the Champions League and saw Arsenal finish fourth.

Tottenham’s pre-match meal before their trip to West Ham caused an outbreak of vomiting and nausea among the players at their Canary Wharf hotel on the eve of the game.

Spurs needed to match Arsenal’s result but, after several players were struck down by illness, they were beaten 2-1 by West Ham as the Gunners beat Wigan 4-2 to snatch the final place in the Champions League.

Such was the volume of players affected – Jermaine Jenas later recalled that players were ‘dropping like flies’ – that Spurs requested the West Ham game be postponed, but they were told by the Premier League that failing to fulfil the fixture could result in a points deduction.

The incident sparked conspiracy theories that Spurs had been deliberately targeted, although an investigation cleared the hotel of blame. The sickness in the squad was instead put down to norovirus.

Antonio Conte revealed after the win over Burnley on Sunday that four players, including Hugo Lloris and Dejan Kulusevski, had been hit by a sickness bug.

Spurs won 1-0 despite the illness within the squad before Arsenal were beaten at Newcastle on Monday night to leave the last place in the top four in the hands of Conte’s men on the last day of the season.