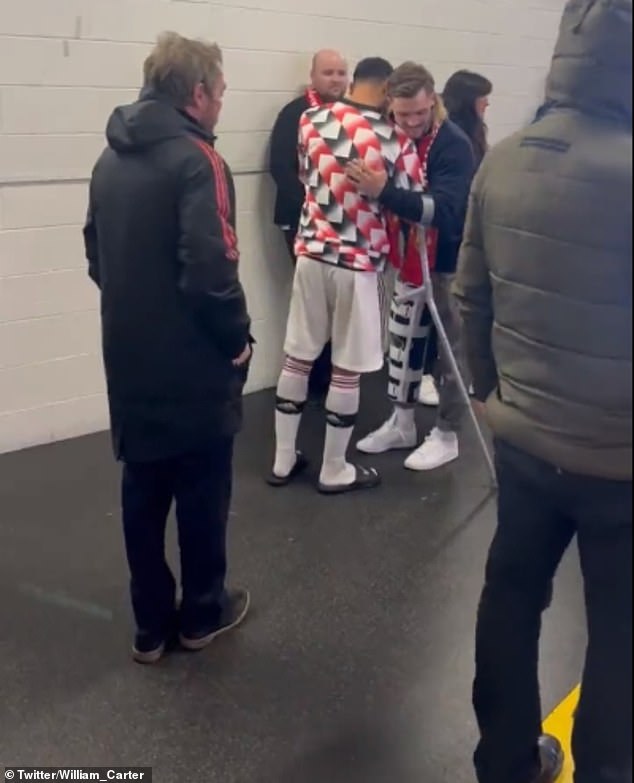 Manchester United star Bruno Fernandes has lifted the spirits of Ryan Papenhuyzen, passing on his prized jersey to the Melbourne Storm fullback after learning of the shocking knee injury that ended his season.

Papenhuyzen, 24, was taken to hospital on Sunday with a fractured kneecap, and underwent surgery on Monday.

Papenhuyzen was forced off the field in the 19th minute of the Storm’s NRL clash against the Raiders at AAMI Park on Sunday following a nasty collision with Jack Wighton and won’t play again this season.

Red Devils midfielder Fernandes reportedly met Papenhuyzen on a Melbourne tram during a recent photo shoot and the high-profile sporting pair struck up an unlikely friendship.

‘Bit of a back story: when he found out of the injury he asked if he was able to come up the hospital and visit,’ Papenhuzen told his Instagram followers.

‘He’d just come off a week of non stop training and media commitments and that was his first thought. Fan for life now. Jersey swap on way.’

Manchester United star Bruno Fernandes has lifted the spirits of Ryan Papenhuyzen, passing on his prized jersey to the injured Melbourne Storm fullback after the pair struck up a recent friendship (pictured) 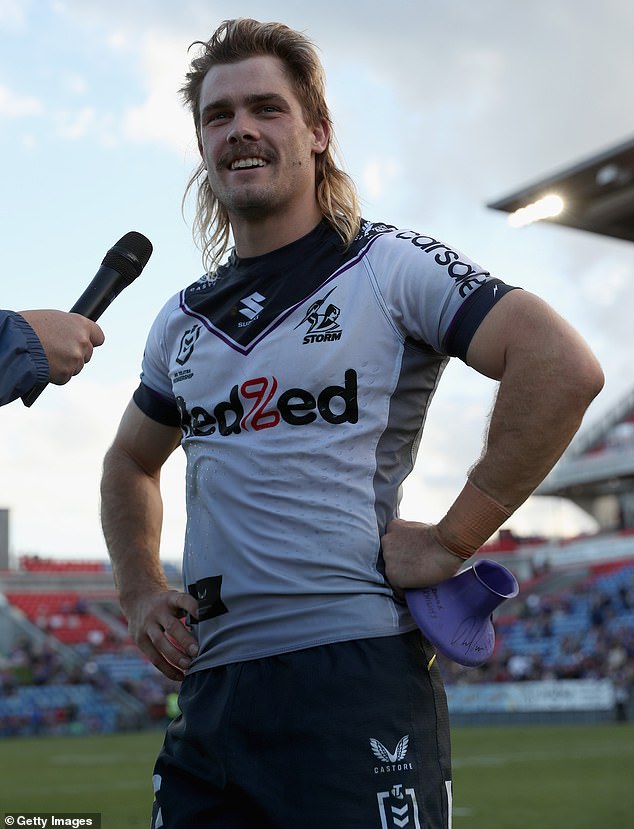 NRL star Papenhuyzen, 24, was taken to hospital on Sunday with a fractured kneecap, and underwent surgery on Monday following a collision with Raiders star Jack Wighton 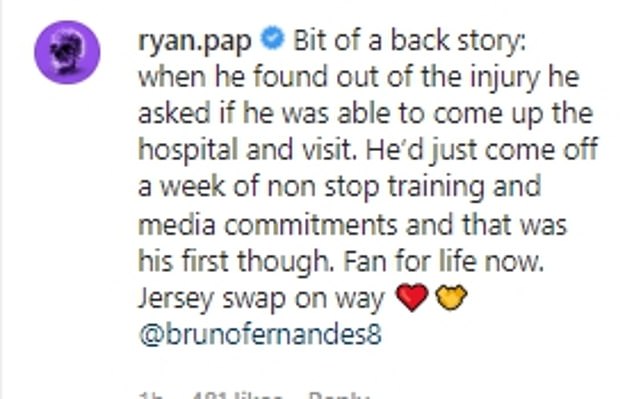 Papenhuyzen made his way into the sheds at the MCG – on crutches – after United’s 3-1 win over fellow EPL side Crystal Palace on Tuesday night.

In a video shared on Twitter, he was warmly embraced by the Portugese attacking midfielder, who is believed to have heard all about the Storm No.1’s shocking injury.

In the footage, Papenhuyzen can be seen wearing a Manchester United scarf as he beams while catching up with Fernandes.

Papenhuyzen has endured a torrid run with injuries this year, managing just 11 appearances so far this season.

He was denied a possible State of Origin jersey with NSW for the second year running after suffering hamstring and knee complaints.

Meanwhile, Fernandes will now travel to Perth with his teammates ahead of United’s next friendly on Australian shores against Aston Villa at Optus Stadium on Saturday. 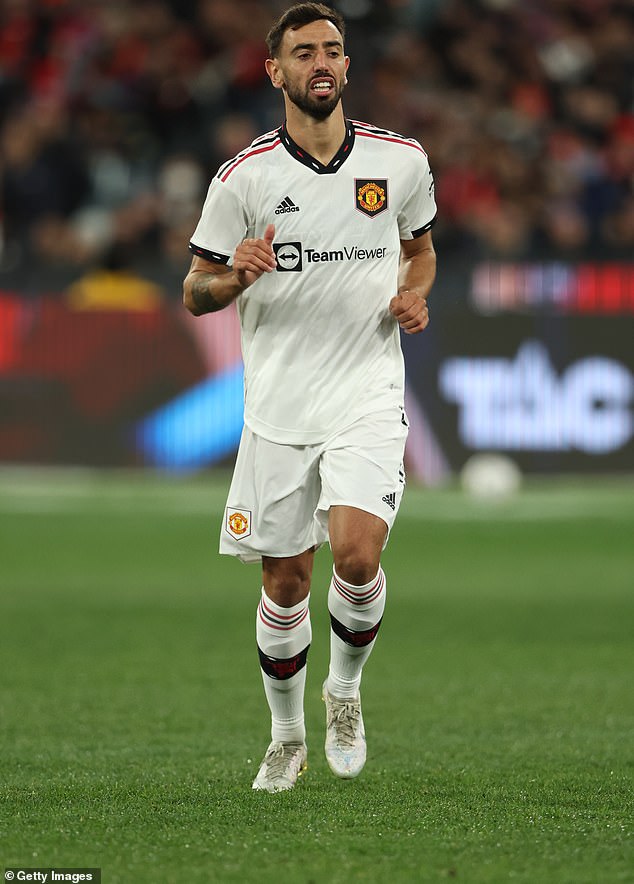 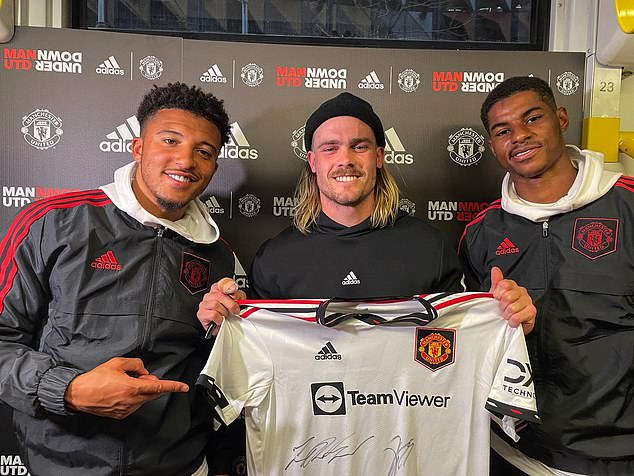 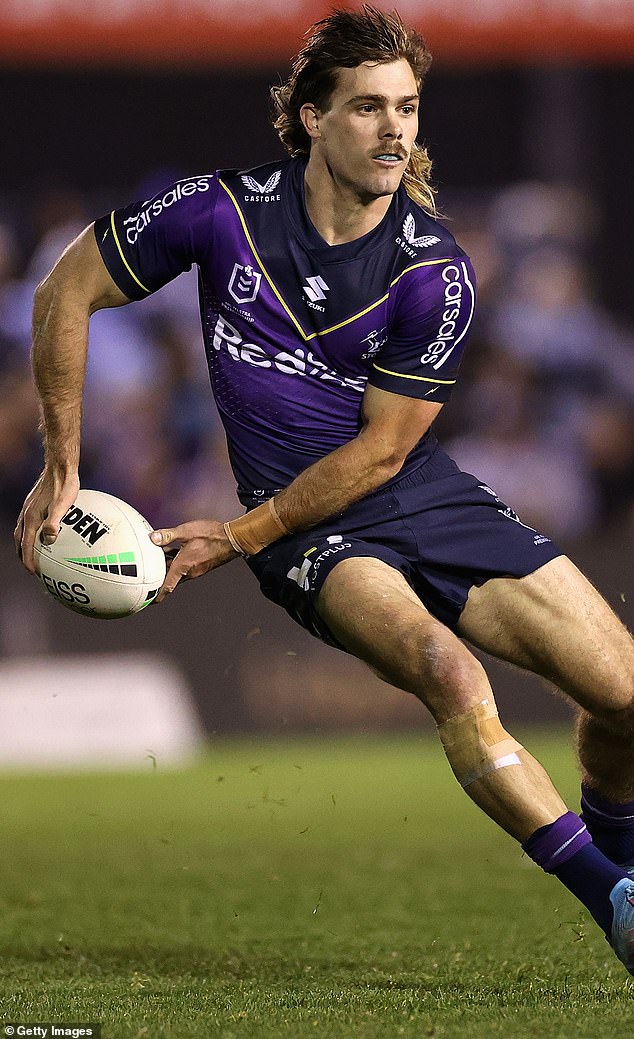 Anthony Martial, Marcus Rashford and Jadon Sancho were on target against the Eagles at the MCG in a clinical performance in front of 74,000 plus fans which impressed new coach Erik ten Hag.

The future of superstar Cristiano Ronaldo remains up in the air, with the veteran said to be keen to play elsewhere.

Complicating the matter is Ten Hag stating the five-time Ballon d’Or winner, 37, is in his plans for this season and is not for sale.

United open their EPL campaign in front of their adoring fans at Old Trafford on August 7 versus Brighton.