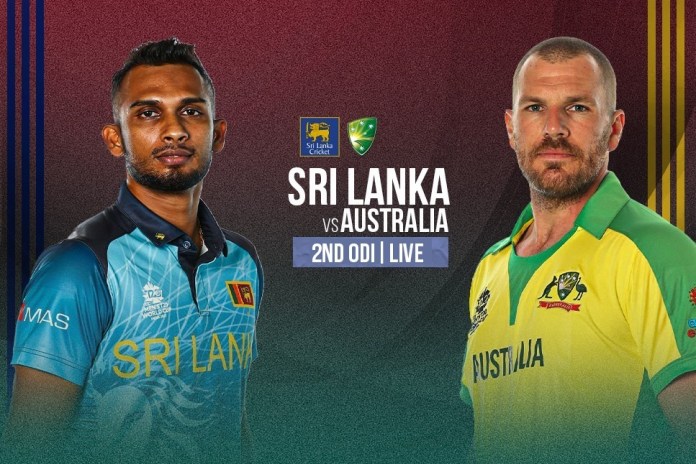 SL vs AUS 2nd ODI LIVE: Hosts Sri Lanka will look to get back to winning ways as they take on Australia in second ODI at the Pallekele International Cricket Stadium in Kandy on Thursday, June 16. Despite setting a total in excess of 300, Australia chased down the target in a thrilling rain-hit first ODI. The hosts are in desperate need of a win in the upcoming contest. Follow SL vs AUS second ODI LIVE updates on InsideSport.IN

However Sri Lanka will enter the contest with star all-rounder Wanindu Hasaranga’s availability in doubt. He suffered a hamstring injury in the previous ODI . He starred in the first ODI with both bat and the ball by slamming 37 runs off just 19 deliveries. He then picked up a four-wicket haul. In case if he is unavailable, it will be a big blow to the hosts. In Hasaranga’s place, they are likely to bring in leg-spinner Jefferey Vandersay or Ramesh Mendis.

Sri Lankan batters performed well in the first ODI with Kusal Mendis, Pathum Nissanka and Danushka Gunathilaka all slamming half-centuries. The batting at the death was also brilliant as 86 runs were scored in the last 10 overs in the first ODI. They will look to continued their good show.

Australia sneak home in the first ODI by two wickets with nine balls to spare!

Glenn Maxwell was the hero at the end with 80no from just 51 balls with six sixes and six fours, while Steve Smith also hit 53 #SLvAUS

Meanwhile, despite winning the first ODI, apart from Glenn Maxwell all the other batters fared poorly against the Sri Lankan spinners. With the pitch at Pallekelle yet again expected to assist spinners, the Men in Yellow will look to put up a much better show against spin.

Like Srilanka, Australia too have injury concerns with Marcus Stoinis and Ashton Agar having suffered side strain. Both the players will not be available in the second ODI and Travis Head and uncapped Matthew Kuhnmann were added to the squad. Leg-spinner Mitchell Swepson is expected to make his way into the XI in place of Agar.

Also Read: SL vs AUS Live: Australia hit by another injury blow Marcus Stoinis ruled out of the ODI series with a side strain

How to watch SL vs AUS 2nd ODI Live Streaming in India?

When will SL vs AUS 2nd ODI Match Start? – Date

What time SL vs AUS 2nd ODI will begin? Time

What is the venue for SL vs AUS 2nd ODI? – Venue

SL vs AUS 2nd ODI will be played at the Pallekele International Cricket Stadium in Pallekele.