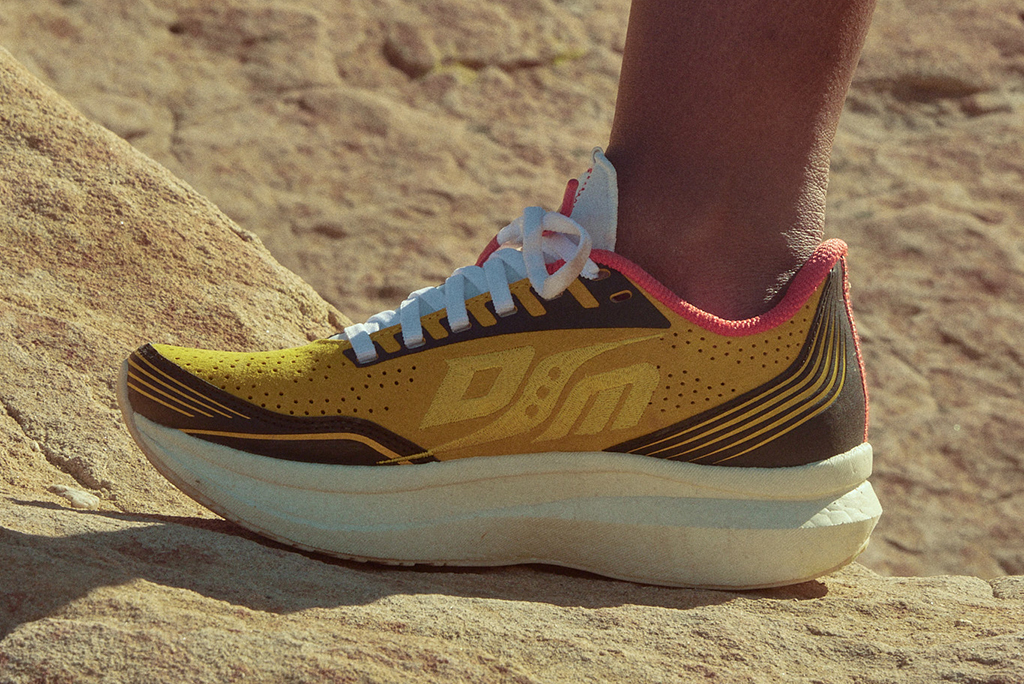 “Sporty casual is the daily look for tons of people. It’s easy. I think ease is what helps make things trendy,” Diet Starts Monday founder Davin Gentry told FN. “For me, it started as a means of not having to take a bunch of outfits with me when I leave the house. Something you can wear to the gym and from there to the office or to a meeting. Workout top and short, but then pair it with the right performance shoe to show you’re in the know.”

Gentry continued, “But I also think that performance running brands are just starting to make better looking shoes as well. It was like performance and good-looking could never be two descriptors of the same shoe until recently.”

With this emerging trend in mind, Gentry and Diet Starts Monday teamed up with Saucony for their first-ever collaboration, a new-look Endorphin Pro road running shoe.

Created for the fashionable gym-goer, Diet Starts Monday dressed the Saucony Endorphin Pro with perforated suede uppers in a yellow wolverine hue for a touch of luxury. Other details include Diet Starts Monday’s mantra, “The direction is there is no direction,” surrounding Saucony’s logo on the lateral side of the shoe, as well as reflective pieces and quotes throughout.

The style-driven elements provided by Diet Starts Monday complements Saucony’s performance innovations in the Endorphin Pro, including its lightweight Pwrrun PB cushioning underfoot and Speedroll tech created to propel the runner forward in order to run faster, not harder.

“Diet‘s signature color has always been yellow, and thinking about walking into a shop — specifically a running store — and seeing this bright yellow pair on the wall, then walking closer to find out it’s suede, it just seemed like something that I hadn’t seen before,” Gentry explained. “From there it was all about, ‘How do I elevate the design without affecting any of the functionality?’ Obviously, we chose to perforate the upper with suede being less breathable. Embroidered the DSM featuring Saucony’s signature ‘S’ over the medial panels, which looked and felt more premium. Added reflective elements that people will find eventually, as well as other micro-details that make the shoe that much more special. Every detail doesn’t have to be widely noticeable. That’s always remained consistent with us.”

Although Diet Starts Monday landed on a performance runner, Gentry said he initially wanted to deliver a new-look take on a shoe from Saucony Originals, the brand’s lifestyle arm.

“I designed and sampled a [Saucony Originals] Grid Web back in 2019 that would’ve been released in 2020. I visited the Saucony HQ in February 2020 to work on the shoe and came across early promo pairs of the Endorphin Pro. I think before I even left the office we flipped the whole project upside down and shifted it from the Grid Web to the Endorphin Pro because it was the perfect silhouette, but also provided the right amount of support and comfort we know is needed for a performance shoe,” Gentry said.

After the Concepts launch, the collab will release May 16 via Dietstartsmonday.us and May 20 on Saucony.com.

The style will launch in unisex sizing and retail for $200.

Looking ahead, Gentry confirmed there will be several other Diet Starts Monday sneaker collaborations, including a three-shoe project with Curry Brand and Under Armour that will roll out in August in his hometown of Madisonville, Ky. Also, the brand’s second Puma collection is slated for a spring ’23 release and then Diet Starts Monday will begin working on its first-ever silhouette.