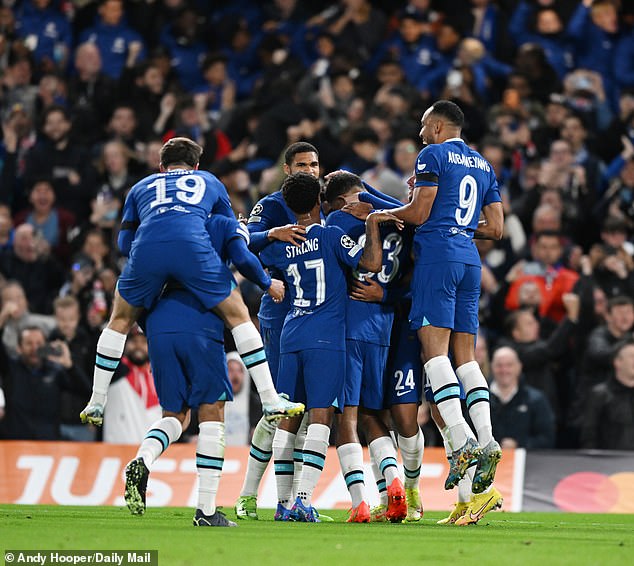 This was lift-off for Graham Potter at Chelsea.

After a frustrating draw against Red Bull Salzburg and a last-gasp win at Crystal Palace, Wednesday night’s 3-0 win over AC Milan offered a hugely promising glimpse of what may lie ahead.

The Blues’ emphatic win over the Italian champions transformed the complexion of Group E in a stroke and helped dispel much of the angst surrounding their Champions League prospects. 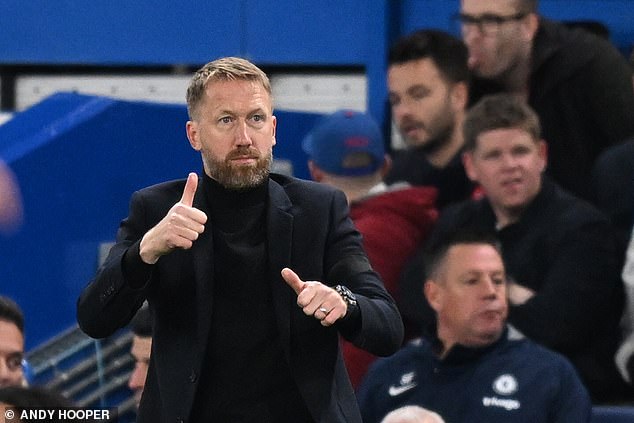 The impressive nature of Chelsea’s performance suggested that Potter’s blueprint will be an effective one as they try to overcome the inconsistent early season form that did for Thomas Tuchel.

Of course, the challenge now is to keep this momentum going and put themselves in as strong a position as possible for after the World Cup.

Return to the tried and tested

Potter experimented with Chelsea’s formation in his first two matches but a return to the familiar 3-4-2-1 paid off handsomely against Milan.

The Salzburg match had seen a small tactical tweak to 3-5-2, with Mason Mount deployed as a No 8 alongside Jorginho and Mateo Kovacic in a midfield three, with Raheem Sterling pushed high and wide on the left.

Pierre-Emerick Aubameyang and Kai Havertz formed a forward pair, with the German dropping off to link play.

It worked in terms of giving Chelsea control of possession – 73 per cent and 648 passes – but they were only able to take one of their 17 chances and were punished by a rare Salzburg attack. 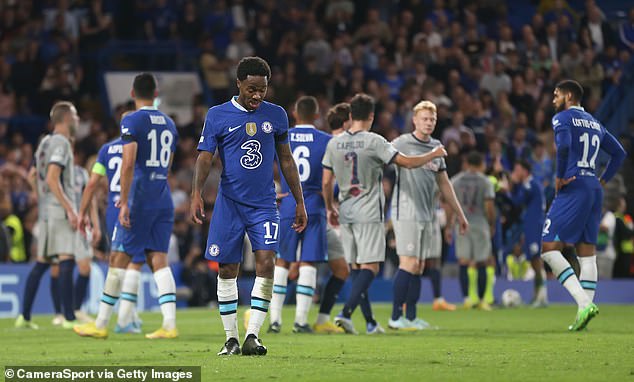 Returning to action after over a fortnight because of the Queen’s death and the Internationals, Chelsea lined up in more of a 4-2-2-2 formation at Palace.

Again, that’s not unfamiliar to the players but after Chelsea’s slender win Potter was left lamenting a lack of width.

So for Milan’s visit he returned to a set-up used often by Tuchel and got the rewards.

Reece James and Ben Chilwell provided a thrust down the wings and Milan couldn’t deal with their overlaps and crossing.

James had an outstanding evening, delivering a goal on a plate for Aubameyang to make it 2-0 and then lashing home the third after Sterling picked him out in the right-hand channel. 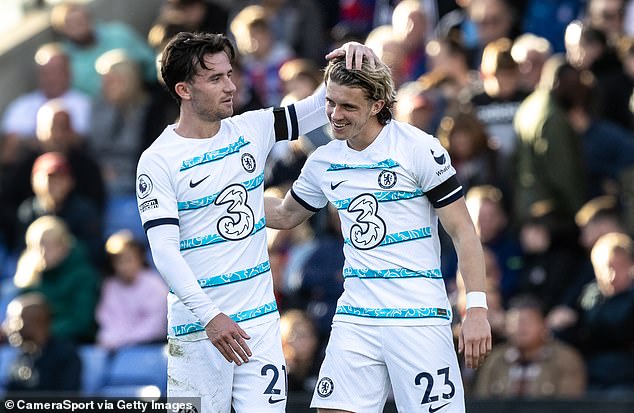 Mount and Sterling were given licence to roam and Milan’s defence were forced into errors.

Potter was also happy to switch things about in-game, with Sterling moving further forward when Aubameyang was replaced by Conor Gallagher on 65 minutes. Havertz and Armando Broja later came on with the contest over.

New mangers like to experiment and Potter certainly likes a tactical dexterity from players but it would be no surprise if they continued with the tried and trusted 3-4-2-1 system now.

Building around an English core

In the BT Sport studio, Rio Ferdinand was thrilled Potter fielded seven English players during the course of the evening.

‘Potter has seven young English players on the pitch which bodes well and all the right buttons are being pressed,’ he said.

Potter started with Sterling, Mount, James, Chilwell and Ruben Loftus-Cheek. Trevoh Chalobah was brought on when Wesley Fofana went off injured late in the first-half, and Gallagher came on later. 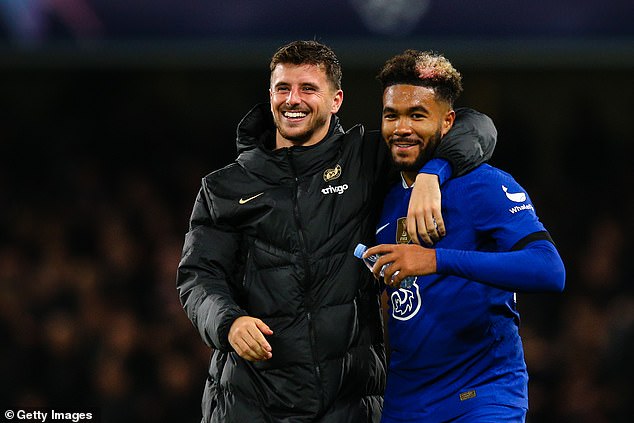 Afterwards, Potter had warm words for James, who is clearly showing now on a regular basis that he is world class.

‘He could play any game in the world, he’s tremendous,’ Potter said. ‘My job is to help him reach his potential because his potential is beyond the sky.

‘We love him. He’s so important for us. My job is to help him reach his potential, and his potential is he can be a Chelsea legend.’ 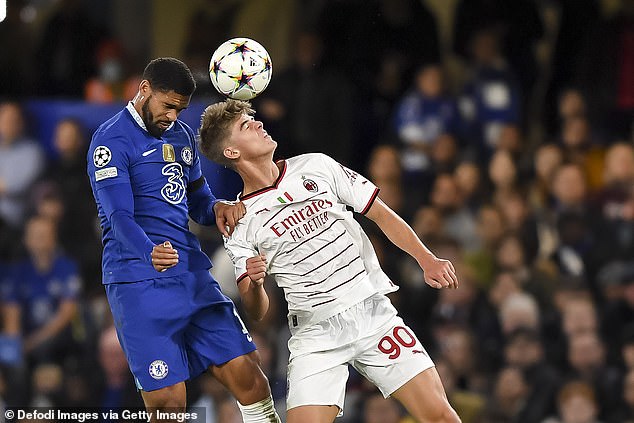 Sterling and Mount should prosper from a free rein in attack, which only bodes well for England, while Loftus-Cheek has been in and out of favour with various managers but now looks right at home in Chelsea’s midfield.

If Fofana’s knee injury is serious, Chalobah has an excellent opportunity to nail down a place in that back three.

Potter has long been touted as a potential future England manager and it seems he’s already doing his bit for the national side with his home-grown Chelsea core. An equally welcome aspect of the evening was Chelsea’s first clean sheet since they won 1-0 at Everton on the opening day in August. At times this season, notably in the 3-0 loss at Leeds and the 2-0 reverse in Zagreb, they’ve looked ragged at the back.

This is far from a great Milan vintage but they are the best team in Italy and Chelsea’s defence restricted them to just one shot on target all night.

Yes, there was a lucky escape when Rade Krunic missed a sitter just before half-time but Chelsea kept their opponents at arm’s length for the most part.

The back three also took the injury to Fofana in their stride, with Chalobah slotting in and standing strong against Rafael Leao and old boy Olivier Giroud.

Whether it’s Thiago Silva, Kalidou Koulibaly and Fofana forming the back three, or Chalobah in there, they must build on this solid display.

The Blues have winnable games ahead against Wolves, Aston Villa and Brentford – plus of course next week’s return fixture in the San Siro – so have the chance to record more clean sheets.

Aubameyang can be a real menace

It was meant to be Romelu Lukaku banging in the goals for Chelsea but instead it’s former Arsenal man Aubameyang who looks their biggest threat in attack.

Aubameyang has scored twice in Potter’s three games in charge and the 33-year-old knows how to conjure something despite seeing relatively little of the ball.

He had just 21 touches against Milan but you couldn’t claim he wasn’t involved. Aubameyang willingly dropped deep to connect the play and finished off James’ cross for 2-0 having stolen a yard on Fikayo Tomori, another ex-Chelsea man. 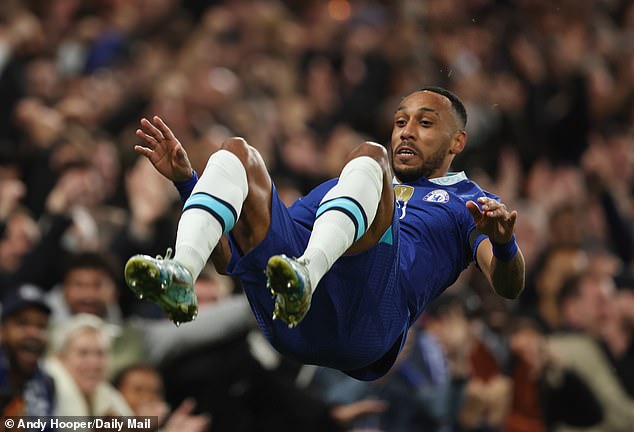 With two goals in two games now, the striker will hope to rack up an impressive total

With Sterling, Mount and Havertz interchanging well behind him and the full-backs offering service, Potter isn’t likely to be concerned at Aubameyang’s limited involvement so long as he puts away chances.

Aubameyang scored 13 times for Barcelona last season and should exceed that total if he continues in this same vein for Chelsea.

He should certainly get the service to thrive and he knows the Premier League inside out.

Clear communication and a relaxed vibe

It was a rather strange start to Potter’s time in charge. After the Salzburg game, Chelsea’s next two fixtures against Fulham and Liverpool were postponed because of the Queen’s passing, followed by many of the players going off to represent their countries.

It meant an unexpected opportunity to work with the players on the training ground at Cobham but without the certainty of when they’d next be in action.

However, it did offer the new manager a window to interact with each player on a personal level without the pressure of games. 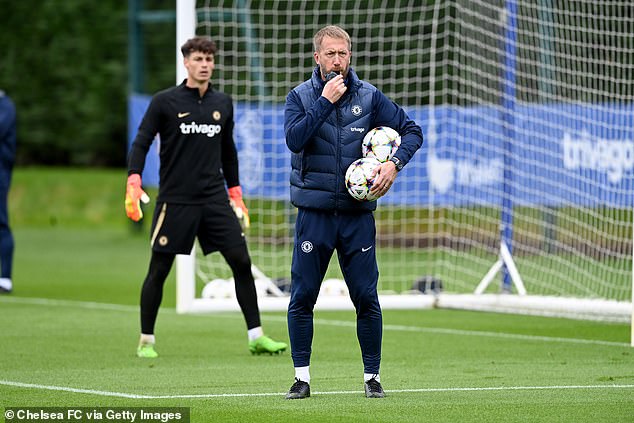 Potter held one-on-one meetings with each first team player before the September internationals.

In a relaxed setting, these were genuine conversations rather than Potter issuing instructions. The players were given the chance to critique their own performances so far this season before Potter told them of his intentions for them and the team.

Everyone was given a clean slate post-Tuchel though as yet there have been no suggestions Potter will make them put on a ballet like he did at Swedish club Ostersund.

It has helped create a fresh mood around the club and now the results are starting to come as well.