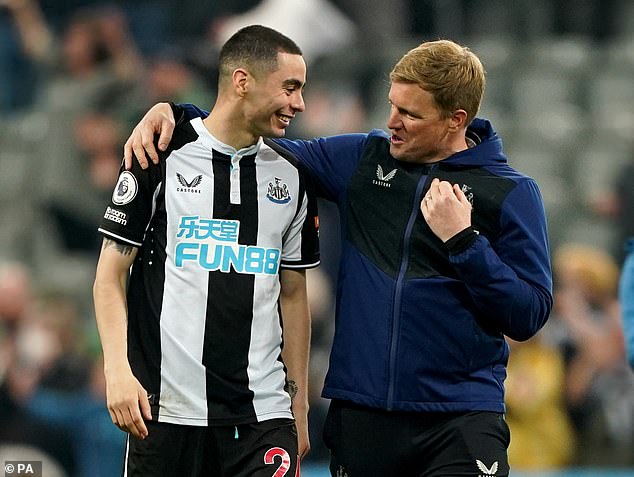 Newcastle’s transformation under Eddie Howe has been one of the stories of the Premier League season so far, with the Magpies climbing up to the giddy heights of 11th place after a 1-0 win over Crystal Palace on Wednesday night.

That victory took their points tally to 40 – remarkable when you consider it stood at just five after 11 matches when Howe took over from Steve Bruce in November. Twenty-five of those points have been earned in their last 12 matches, with Newcastle second in the table in that period since January, behind only Liverpool.

Of course, the transformation of the club’s fortunes has come against the backdrop of their Saudi-led takeover over in October, with Howe able to spend £94million on new arrivals in January, but it has not been a case of just splashing the cash and watching results improve.

Key signing Kieran Trippier only played five matches before injury struck in February, while new £25m striker Chris Wood has scored just twice. Instead, Newcastle’s revival has been mostly brought about by subtle tweaks and changes by Howe and the club with largely the same squad he inherited from Steve Bruce.

Here, Sportsmail looks at how Newcastle have turned things around…

On the pitch, Newcastle’s main problem was abundantly clear from the first match of the season, when they were beaten 4-2 at home by West Ham. In fact, they conceded 12 goals in their first four Premier League matches. When Howe took over on November 8 their record was an alarming 24 conceded from 11 matches – and it did not improve instantly, with another 18 let in during his first nine matches in charge.

It was no surprise then that when the transfer window opened, armed with Saudi millions, Howe’s first concern was his ageing and creaking backline. In came Kieran Trippier, Matt Targett and Dan Burn in January and things improved immediately. Since January 22, Newcastle have conceded just 12 in 13 matches – and five of those came in one game at Spurs. That 5-1 defeat is the only time Newcastle have conceded more than one goal in a match since Christmas. Before then, they had done so a staggering 12 times.

Trippier was a revelation before injury curtailed his season in February, while Targett has been a steady presence at left back. The pick of the new arrivals though has been local boy and Newcastle fan Burn, who has marshalled the defence superbly since joining from Brighton and helped raise the games of the likes of Fabian Schar and Emil Krafth. 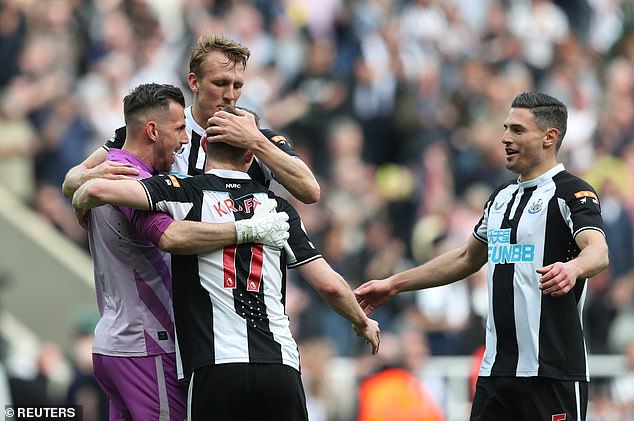 GETTING THE FANS BACK ON SIDE

Being taken over by a consortium with access to billions of pounds was always going to cheer the Toon faithful up after 14 years of regression and depression under the hated Mike Ashley, but the new owners have played their cards right to turn St James’ Park into a fortress once more.

Newcastle have won their last six home matches on the spin – and are unbeaten at St James’ in the Premier League in their last eight matches in total – and the return of a passionate atmosphere led by the Gallowgate End has certainly played its part.

Supporters group Wor Flags had stopped their pre-match displays in May 2019 in protest against Ashley’s ownership, turning the famed St James’ atmosphere into a funereal one as Steve Bruce’s side struggled. One of the first moves of the new owners was to invite Wor Flags back – with the sight of chairman Yasir Al-Rumayyan and co-owners Mehrdad Ghodoussi and Amanda Staveley at matches waving black and white flags becoming a regular one – and it has improved the atmosphere dramatically.

Burn said after beating Palace: ‘I love playing at home. It feels like what it used to be like when I was a kid.’ 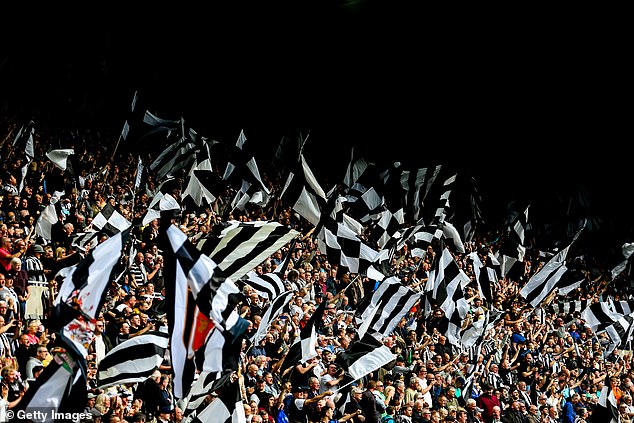 Newcastle’s lack of ambition under Ashley means that is a long time since top quality international footballers turned out for the club. Relegated twice and finishing above 10th just once in 14 seasons, Toon fans had got used to seeing journeymen turning out for their team and have been crying out for stars to adore as they did in the eras of Sir Bobby Robson and Kevin Keegan.

Step forward Bruno Guimaraes, the six-cap Brazil midfielder signed from Lyon in January for a fee rising to £40million. Having been eased into Premier League action – his first five appearances came off the bench – the 24-year-old has exploded into life of late, scoring three goals, creating another and having an increasingly positive and classy influence on games with and without the ball.

Of Newcastle’s five January arrivals, Guimaraes’ has the potential to be the game-changer for the club, with others of similar stature from across Europe more likely to want to join him in the summer and future transfer windows. 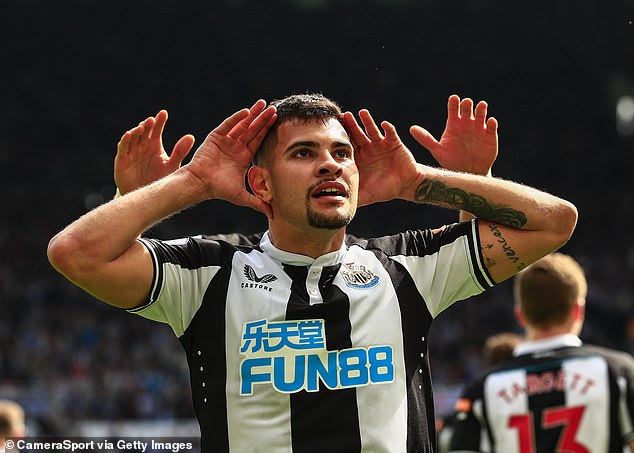 One area of Newcastle’s play that has improved drastically since Howe replaced Bruce has been their game management, which is clearly being worked on in training.

They have displayed a new-found ability to see out matches, with the narrow win over Palace following similar gutsy victories against Wolves, Brighton and Aston Villa. This comes in stark contrast to the 10 points Newcastle dropped from winning positions under Bruce at the start of the season.

In addition to that, since the start of February, Newcastle have won 10 points from losing positions – more than any other Premier League in this period – with comeback wins coming against Leicester, Southampton and Everton.

If there was an award for the Premier League’s most improved player this season, the Brazilian powerhouse would be a strong contender – and Howe must take plenty of credit for seeing Joelinton’s potential as a Premier League midfielder.

Few else saw it, but to witness the Brazilian’s strength, work-rate, driving runs, economic use of the ball and late arrivals in the box, it is a wonder that he hasn’t being playing in midfield all of his life. So integral has Joelinton become to Howe’s team that when he needed to make room for Guimaraes, it was Joe Willock and not Joelinton who was dropped to the bench. 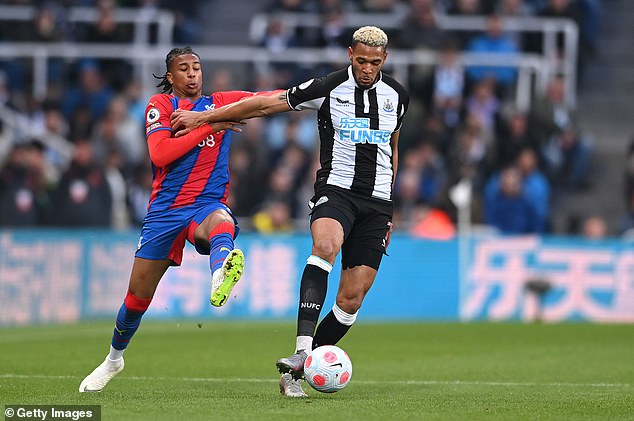 The £40m man’s goal record is still poor, with just two coming this season and 12 in 110 overall for Newcastle, but it matters far less when he’s not playing up front.

One man has been at the centre of all of the above – and that is Eddie Howe.

When he won just one of his first 10 matches in charge, it looked like Newcastle were had employed the man who couldn’t save Bournemouth from the drop in 2020. After winning nine of his last 13, it now looks like they have the version of Howe who led the Cherries to three promotions in six years and was touted for the England job.

He’ll be the first to admit he needed a break and a change after so long at Bournemouth, but Howe has breezed into Newcastle like a breath of fresh air, changing methods and re-energising the players, staff, fans and the whole city.

Jonjo Shelvey, who has been a key man in midfield under Howe, explained his managerial style to Sky Sports recently. ‘He’s very family orientated,’ he said. ‘His first thing when he came in was – everyone had a sheet of paper and they had to write down their family’s names, their wives’ names. their kids’ names and their birthdays.

‘I think he wants to get to know everyone and I’ve never had a manager like that. It’s something different and something I enjoy.’ Newcastle’s new owners and their fans are certainly enjoying it too. 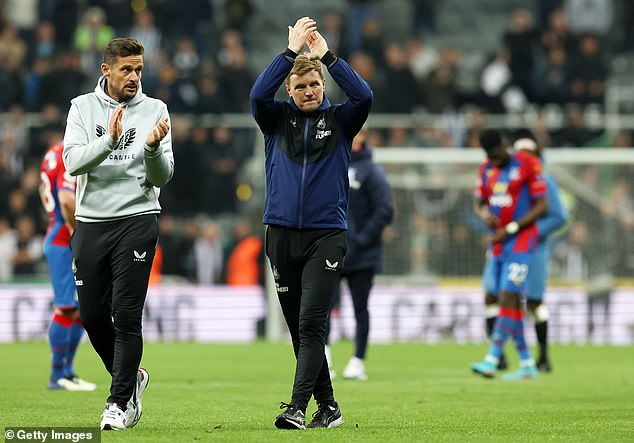 Howe’s fresh approach since November has seen him win over players, staff and fans