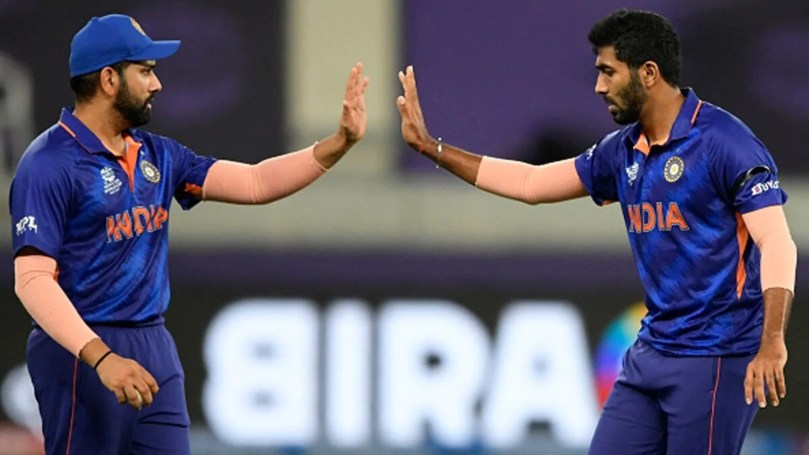 “Bumrah is out of world cup; that will be a big miss. We need to find a guy, I don’t know who that guy is yet, there are a few guys.. we will make that call in Australia,” Rohit said at the end of the third T20 against Australia.

Who Replaces Jasprit Bumrah? Rohit though is not ready to reveal the name of the replacement, Former India batting coach Sanjay Bangar meanwhile has picked Mohammad Shami as the replacement of Bumrah.

“Since we already have Bhuvneshwar Kumar and he does a similar job as Deepak Chahar, we need someone with pace, who can get good bounce, and I will go with Mohammad Shami,” he told Star Sports.

India will leave for Australia on Thursday. Indian team will be based in Perth at the start. Rohit gave reasons why they chose that particular city as their base.

“Lot of guys haven’t been to Australia. That’s why we are going there early and also play on bouncy conditions in Perth to see what we do out there. Only 7-8 are of squad have gone to Australia before. We have organised couple of practice games in Western Australia plus there are two ICC practice games.”

Rohit Sharma ‘Concerned about India’s Death Bowling’: Indian bowling has been a concern. No one has really claimed the role of a death-overs specialist.

Harshal Patel has leaked runs; so has Arshdeep Singh. Deepak Chahar went for runs in his last two overs in 3rd T20. Mohammad Shami couldn’t play a game after he picked up Covid-19 virus. Umesh Yadav has had a couple of games.

“We need to look at our bowling to see what more options we can find for in powerplay, middle overs and death overs. We are still working towards it. Guys need lot more clarity and it’s my job to make it happen. It’s a work in progress.”

Head coach Rahul Dravid feels it’s an opportunity for someone else to stand up in the absence of Jasprit Bumrah who has been ruled out of the World CUP.

The Indian bowling has been under the scanner after their below-par show in the recent matches. Bumrah’s absence is a big blow for India for the mega ICC event which will be played in Australia where the conditions are expected to offer pace and bounce.

Dravid also admitted that Bumrah’s absence is a big loss for the team and India will miss his personality around the group.

“Bumrah’s absence is a big loss, he’s been a great player but it happens, it’s an opportunity for someone else to stand up. We’ll miss him, his personality around the group,” head coach Rahul Dravid told broadcasters after the third T20I against South Africa.

India suffered a 49-run defeat in the third T20I as they failed to chase the 228-run target in Indore. It was a dominant show from the Proteas side in the dead-rubber as they outclassed India in all three departments.

Ahead of the T20 WC, India won their last two series against Australia and South Africa as Dravid is pleased with his team’s performance after an underwhelming show in Asia Cup 2022.

“Good to get the right results in both series. In this format, you need luck, things to go your way, especially in close games. We didn’t have that in the Asia Cup, but had some luck during the Australia series,” Dravid said.