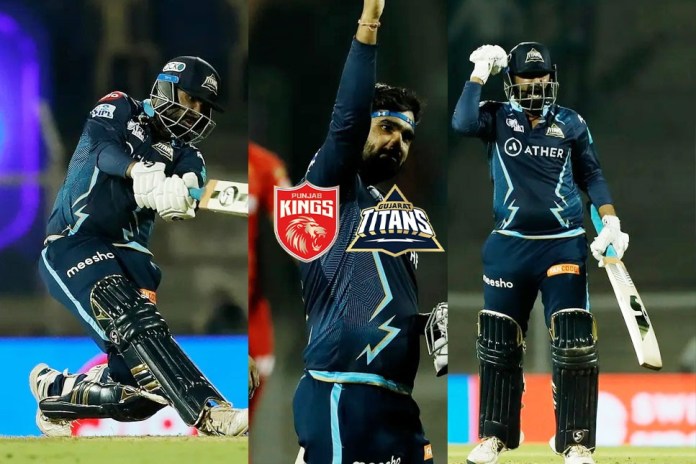 PBKS vs GT Live, IPL 2022: ‘ICEMAN’ Rahul Tewatia slams back-to-back SIXES– ‘Cometh the hour, cometh the iceman’ Gujarat Titans (GT) allrounder Rahul Tewatia has proved to be a gem after his thrilling knock against Punjab Kings (PBKS). He slammed two sixes off the last 2 balls with GT requiring 12 runs of those deliveries. Follow all the live updates on InsideSport.IN

PBKS vs GT LIVE: How the last over panned out?

“It feels good when the game is won. There wasn’t a lot to think in the final over, we just had to hit sixes and that’s what me and David (Miller) were talking about. I knew (on the last-ball six) that it had gone off the middle of the bat, so it would clear the fence. I did premeditate, felt he (Odean) bowl wide outside off to me, premeditated and it executed well for me,” a very happy Rahul Tewatia told the host broadcaster Star Sports after his special performance.

Players to hit two sixes off the last two balls to win an IPL match:

Players to hit a six off the last ball of the 20th over to win an IPL match:

Waah Lord Tewatia,….
Need his statue in Punjab Kings dugout.
What a brainfade by Smith to concede a overthrow with 13 needed of 2. #PBKSvGT

Rahul Tewatia vs Punjab. A West Indian fast bowler. Incredible.
Impossible is nothing.