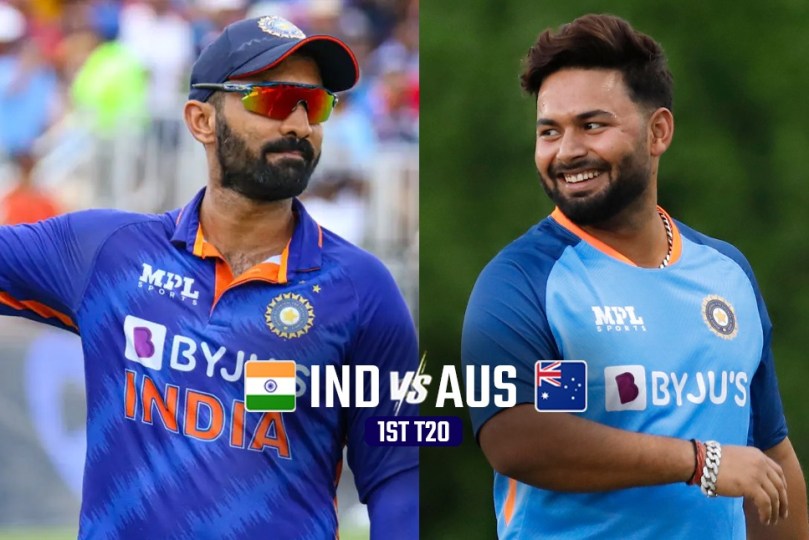 IND vs AUS 1st T20 – India Playing XI 1ST T20: Should India opt for Rishabh Pant or Dinesh Karthik in playing XI? It has become a burning question in Indian cricket. Ahead of the India vs Australia T20 series, which starts on Tuesday, there is no clarity about it. India vice-captain KL Rahul, while addressing the media on Monday, said that the decision to pick either of the two is a tough one to make. Follow Australia tour of India live updates with InsideSport.IN

Karthik made it to the Indian team after the conclusion of a successful IPL 2022. He delivered as a finisher, helping him get into Indian squad. His arrival has complicated matters, else Pant did not have such competition.

People on the outside have different takes on the matter. Recently former India captain said that India should take risk and play both the players as well.

To be fair, there has been instances when India have played both Pant and Karthik, but that has been done when the seniors were rested majorly. With the Indian team preparing for the T20 World Cup as well, playing both would disrupt the team combination.

Rahul said it depends on the surface and the opposition they are playing before picking either of Pant or Karthik. Pant is normally used as a floater or in the middle order while the right-hander is used a finisher.

“It again depends on the kind of combination you want to go with. It depends on the surface and the teams we are playing against. These are not easy decisions. Both the high-quality players, and have been playing well. Both of them do different roles,” Kohli told reporters in Mohali.

“For us, the leadership it is to see what role we need players and who ever fits into role will be in the Playing XI. Everyone in the team has defeined roles and responsibilities. On that given day what we think the Indian team needs, the decision will based on that one.”

The three-match T20 series starts at the IS Bindra PCA Stadium on Tuesday. After this series, they will also host South Africa for a three-match series later this month. Hence, before the Indian team flies to Australia, they need to sort out the matter.