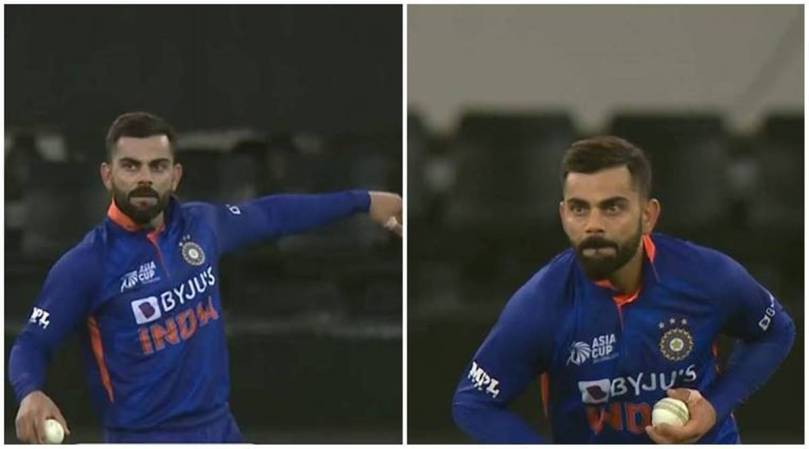 IND vs AUS LIVE – Virat Kohli as Bowling Option? Whoever saw the TEAM India’s nets on Monday, had only 1 question…

IND vs AUS LIVE – Virat Kohli as Bowling Option? Whoever saw the TEAM India’s nets on Monday, had only 1 question on lips – Is Rohit Sharma developing Virat Kohli as BOWLING OPTION for India? Kohli was seen bowling for almost 30-40 Minutes in the nets. The effort put up by Kohli ‘the bowler’ looked ULTRA SERIOUS. Even Coach Rahul Dravid was by his side to monitor Kohli the bowler giving clear indication that team is serious about him as a bowling option: Follow IND AUS 1ST T20 LIVE Updates with InsideSport.IN

Virat Kohli as Bowling Option? The former India captain first batted for almost 1 hour at the nets. He was immediately asked by Rahul Dravid to join the bowlers at the nets.

Kohli continuously bowled with his cross-legged action for almost 30-40 Minutes. Dravid kept monitoring him along with other members of the support staff.

Not only Dravid but in the pictures posted by Punjab Cricket Association, it is clearly seen other team members are also very animatedly and seriously watching Kohli bowl. Hardik Pandya, Ashwin – all were captured watching Kohli’s bowling efforts.

Kohli recently bowled a solitary over against Hong Kong in the recently-concluded Asia Cup.

Spotlight on Axar Patel
Axar Patel, who has replaced the injured Ravindra Jadeja, had an extended batting session. The 28-year old has always been Jadeja’s back-up, and has lived up to the challenge whenever he was called into action. Axar mostly faced spinners R Ashwin and Yuzvendra Chahal, apart from Kohli’s dibbly-dobblies.

With the way India have been experimenting, we might see the left-hander used as a floater in the batting order to have a go at the spinners. Against South Africa earlier this year in Cuttack, India had sent in Axar in the 13th over ahead of Dinesh Karthik to allow the finisher to come in later during the death overs.

Bumrah cranks up the pace

Jasprit Bumrah, who is returning from a back injury, was doing what he does best, troubling batters for fun. Bumrah found the outside edge of both Kohli and KL Rahul’s bats on several occasions before he had a go at Hardik Pandya.

Jasprit Bumrah admitted that it is “difficult to manage workload” across three formats and that’s why preference during a particular year is on the format in which India is playing a global event. (AP Photo/Matt Dunham)

In between, he also shared a good 30 minutes with the Punjab Cricket Association’s net bowlers. “Ye wala acha tha, thoda aur aagey daalo (This one was good, pitch it up further),” he advised the six-seven pacers.

Then he moved to the last net, where Bhuvneshwar Kumar was batting and gave a few throwdowns to his fellow pacer before calling it a day.

Dinesh Karthik didn’t have much of a hit, while Deepak Hooda skipped the net session. Rishabh Pant practised his power-hitting and was the one who donned the wicketkeeping gloves during the fielding session.