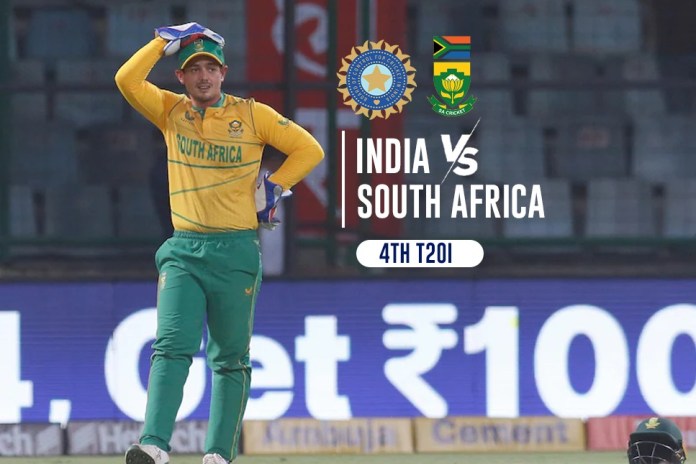 IND vs SA LIVE – Rajkot 4th T20 LIVE: Quinton de Kock could make a return to the playing XI as South Africa look to seal the series in Rajkot on Friday. The left-hander missed the last two games with injury but could be considered for selection in a pivotal clash in the series. Meanwhile, Aiden Markram has been ruled out of the series with COVID-19. Follow India vs South Africa live updates on Insidesport.IN

As per South African media reports, Quinton de Kock is in contention to return to the side when Temba Bavuma names his team for the IND vs SA 4th T20. De Kock had played the first T20 but missed the next two citing a wrist injury. In his absence, Heinrich Klassen was drafted in to keep wickets.

Earlier, de Kock was considered to be ruled out of the series with CSA chief Graeme Smith hinting that the Proteas would not risk him with the England tour ahead. “The injury is a little serious from what I hear. I don’t think he will take any further part in the series as South Africa won’t risk him ahead of the England Tour,” Graeme Smith said at the post-match show on Star Sports.

Wicket-keeper batsman, Quinton de Kock, has made a marked improvement in his recovery from a wrist injury. The Proteas’ medical staff will continue to assess his progress and make a decision on his availability for match four in due course.#BePartOfIt

However, the latest reports from the South African camp mention that the wicket-keeper batsman has shown marked improvement and could make a prompt return. With Aiden Markram ruled out and Reeza Hendricks struggling to make a mark, De Kock’s return is all the more crucial for South Africa. Temba Bavuma’s side are currently leading 2-1 with two games to go.

Meanwhile, South Africa batter Aiden Markram was on Wednesday officially ruled out of the remaining two T20Is against India. Markram had already missed the first three games after testing positive for Covid-19 before the opening match in Delhi.

“Proteas batsman, Aiden Markram, has been ruled out of the remainder of the Proteas’ tour of India. He spent seven days in quarantine after testing positive for Covid-19 last week and will not be able to complete his return to play programme in time to take part in the remainder of the T20 series,” a Cricket South Africa statement said.