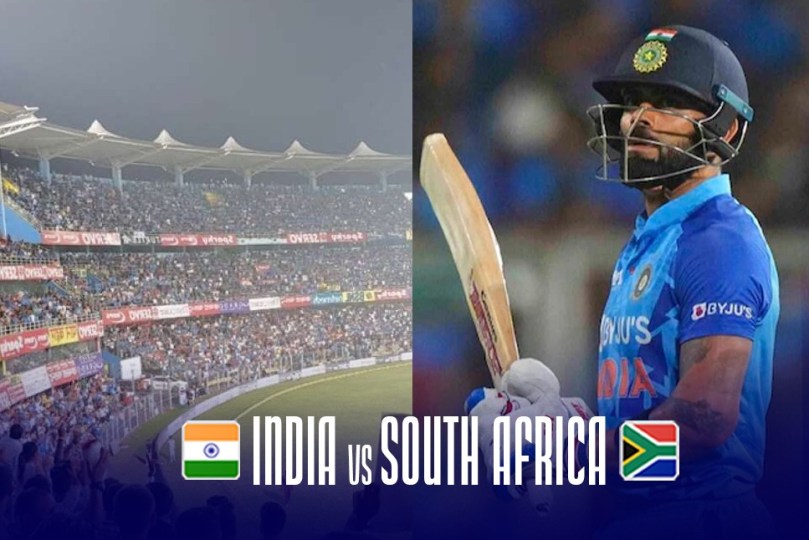 IND vs SA LIVE: Virat Kohli: Just as Virat Kohli’s ‘selfless knock’ won the hearts of cricket lovers here on Sunday night, the boisterous crowd that cheered the game drew praise from the ace player too. Kohli missed a half-century by a whisker as he remained unbeaten at 49 with India setting a target of 238 for South Africa. India went on to win the match by 16 runs and grab the three-match T20 series by winning the first two games.Follow IND vs SA Live updates with InsideSport.IN

The capacity crowd of nearly 39,000 at the Assam Cricket Association (ACA) Stadium here had the loudest cheers reserved for the former Team India captain.

IND vs SA LIVE: Virat Kohli in awe of capacity crowd at Guwahati, thanks fans for terrific atmosphere as India clinch series – Check out

Praising the massive support, Kohli expressed his gratitude to the crowd on Twitter. “Great game. Terrific atmosphere. Thank you Guwahati,” the star player wrote, sharing pictures of the game, in a post-midnight Tweet

Chief Minister Himanta Biswa Sarma, who was among the crowd for the match, shared the Tweet and wrote: “Thank you so much @imVkohli .”

Thank you so much @imVkohli . https://t.co/jhjfOFoP9p

Kohli’s fans, who ignored humid conditions and missed Durga Puja festivities on Sunday to watch their favourite cricketer in action, also responded with the same love on the micro-blogging site. Cricket follower and journalist Bidisha Singha wrote: “Thank u Champ! What a selfless knock…”

Thank u Champ! What a selfless knock… https://t.co/eb9uKgmIrA

Virat Kohli gave Surya Kumar Yadav (61 off 22 balls) perfect support and became the first Indian to get to 11,000 T20 runs during his 49 not out. He also gave finisher Dinesh Karthik the maximum strike. Karthik slammed 17 not out from seven balls.

Another Kohli fan Sasanka Chakraborty tweeted: “Thanks for the wave today @imVkohli.”

Kudos #TeamIndia for clinching the first ever T20 series win against #SouthAfrica in India!

Thanks to the thunderous batting of one of my fav players @surya_14kumar!

Bdw @surya_14kumar thanks for the gratitude you expressed (while fielding) to me for cheering INDIA INDIA! pic.twitter.com/5LFKopnfda

He shared a clip of Kohli waving to the stands after practice just before the start of play. Kohli had also posed for photographs with fans during net practice at the stadium on match eve, drawing praise from the game lovers.

IND vs SA LIVE: Virat Kohli in awe of capacity crowd at Guwahati, thanks fans for terrific atmosphere as India clinch series – Check out