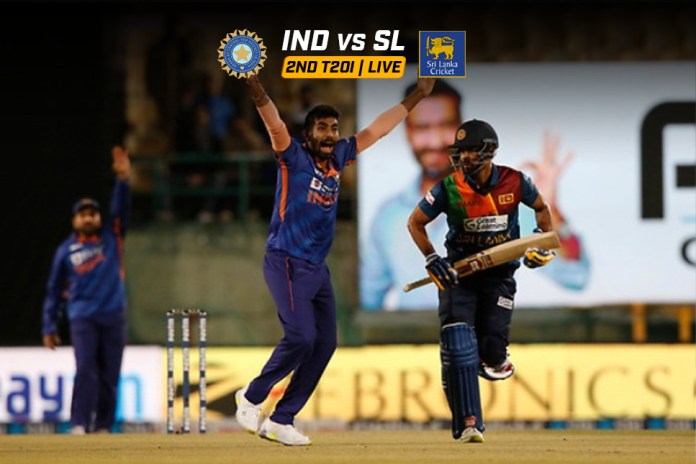 IND vs SL LIVE Score – Sri Lanka bat first: Rohit Sharma won the toss and opted to bowl first in the 2nd T20 against Sri Lanka in Dharamshala. India is aiming for another series win and will attempt to extend their winning streak to RECORD 11 matches. The 2nd T20 will be played at Dharamshala. Follow INDIA vs Sri Lanka 2nd T20 LIVE Updates on InsideSport.IN

As for Playing XI, India go unchanged. That means, no T20I debut for Mayank Agarwal. Sri Lanka have made two changes to the XI.

Over 7: Ravindra Jadeja comes in

Over 6: Yuzvendra Chahal comes in

Over 5: Harshal Patel comes in

Over 2: Jasprit Bumrah with the second over

Over 1: Bhuvneshwar Kumar begins for India

“We are going to bowl first, just want to have a score in front of us. It’s going to get colder as the game goes on. Same team for us. The changes don’t depend on win or loss. It’s just about what the team wants. We also have at look at niggle/injuries. We also have to take care of the guys,” Rohit Sharma said at the toss.

Onto the 2nd @Paytm #INDvSL T20I at Dharamsala 📍#TeamIndia pic.twitter.com/iAGh8FDrwt

IND vs SL LIVE: Ishan Kishan’s ‘BIG THANK YOU’ to captain Rohit Sharma for tips during the West Indies series: CHECK OUT

2nd T20 LIVE Updates – India were forced to look in the mirror after their early exit from the T20 World Cup last year but four months later, they look a transformed unit with a bunch of youngsters being tried out in various positions and roles.

It is still early days but the Rohit Sharma-led side has already figured out the core group of players that will travel to Australia for the World Cup Down Under later this year.

Young opener Ishan Kishan got a massive dose of confidence in the series opener on Thursday after his struggles against the West Indies.

Finding strike rotation tough in the preceding series, Kishan was able to overcome that weakness against the Sri Lankan bowlers besides flaunting the strokeplay he is known for in the IPL.

There is no time to settle in a T20 game and India have finally realised that, allowing them to post 180 plus totals regularly.

LONGEST Winning Streak T20I: If it wasn’t for Ruturaj Gaikwad’s wrist injury, he could have opened with Kishan and Rohit would have dropped himself down the order like he did against the West Indies.

The same could happen on Saturday if Gaekwad is able to regain full fitness.

Such is Rohit’s class that he has not taken any time to find his rhythm after coming from an injury break. He looked in sublime touch en route to his 44 but must be disappointed to not have carried on for longer.

Shreyas Iyer made merry at number three in the absence of the rested Virat Kohli and would be aiming to repeat that for the rest of the series.

When a full strength India take the field next, he might not find a place in the playing eleven and therefore, he needs to make the most of the opportunities that come his way.

As Rohit indicated after the opening game, a fit again Ravindra Jadeja will continue to bat higher up the order as the team wants to optimise his significantly improved batting skills.

“We want more from him that is why we asked him to bat higher. You will see that happening more and more in the games that he plays for India. I want him to bat up the order more.

“He is a very improved batter, so we will try and see if we can promote him going forward. We are very clear with what we want to achieve with him in white ball cricket,” said the skipper referring to the all-rounder.

IND vs SL LIVE Score – 2nd T20 LIVE Updates: Comeback man Sanju Samson did not get to bat in the opener and he will be eagerly waiting for his turn at the scenic Dharamsala ground.

India are also getting better on the bowling front. They used as many as seven options, including Deepak Hooda, on Thursday and most of them did alright. Venkatesh Iyer was a tad expensive but took a couple of wickets.

It would take a special effort from Sri Lanka to end India’s 10-match winning streak in the spiritual home of Dalai Lama.

With a misfiring top-order and absence of frontline spinners Maheesh Theekshana and Wanindu Hasaranga, Sri Lanka struggled to compete in the first game.

Even skipper Dasun Shanaka bowling after a while did not help as Indians looked unstoppable with the bat.

To infuse some experience into the batting line-up, Sri Lanka could replace Kamil Mishara with Danushka Gunathilaka, while Dinesh Chandimal could make way for Dickwella.

IND vs SL LIVE Score – Can Weather play Spoilsport? The weather is expected to be much colder in the night compared to Lucknow. With only a travel day separating the two games, the players will have little time to adjust to the conditions.

The last time India were to play an international match in scenic Dharamsala, rain didn’t allow even a coin toss.

The same thing had happened during their last scheduled T20I here.

And rain could play spoilsport on Saturday as well. The last T20I in Dharamsala was played back in 2016.