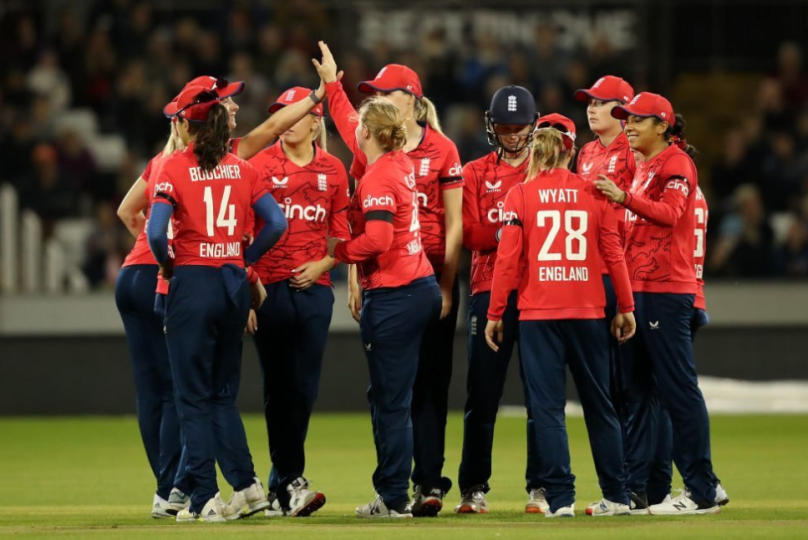 IND-W vs ENG-W Highlights – England win by 9 wickets – An all-round performance from hosts England saw them clinch a more than comfortable 9-wicket win over India. India’s sloppy fielding plus some aggressive batting strokeplay from Dunkley saw the hosts seal the chase with seven overs to spare. England now lead the three-match series 1-0. Follow India-W vs England-W Live updates with InsideSport.IN

IND-W vs ENG-W Highlights: Chasing 133 to win, England could have been in trouble early with Sophia Dunkley edging one to Richa Ghosh. However, Renuka Singh had overstepped handing the English opener a reprieve. She received another reprieve soon with Shafali Verma also dropping a sitter at extra cover.

Ther sloppiness meant that England were off to a flyer and eventually smashed 52 in the first six overs. Wyatt broke loose, but some fine glovework from Richa Ghosh saw the end of her in the first over post powerplay. Alice Capsey continued the aggressive approach as India continued to be shambolic in the field with boundaries available at ease.

Capsey and Dunkley put on their fifty partnership in just 26 balls with the latter also reaching her half-century. The duo saw England over the line in 13 overs, with more than seven overs to spare.

Earlier, England captain Amy Jones won the toss and put India into bat. Smriti Mandhana started positively but couldn’t sustain her approach as England spinners got into the game. Verma and Hemalatha could not sustain the momentum and England put the runs in check with wickets then following.

India however looked set for a total beyond 150 with Harmanpreet Kaur and Richa Ghosh going strong. However, the duo fell in the space of two overs to lay India’s innings bare. Deepti Sharma chipped in with a valuable 29 down the order to take India to 132 but eventually it proved to be way below par.