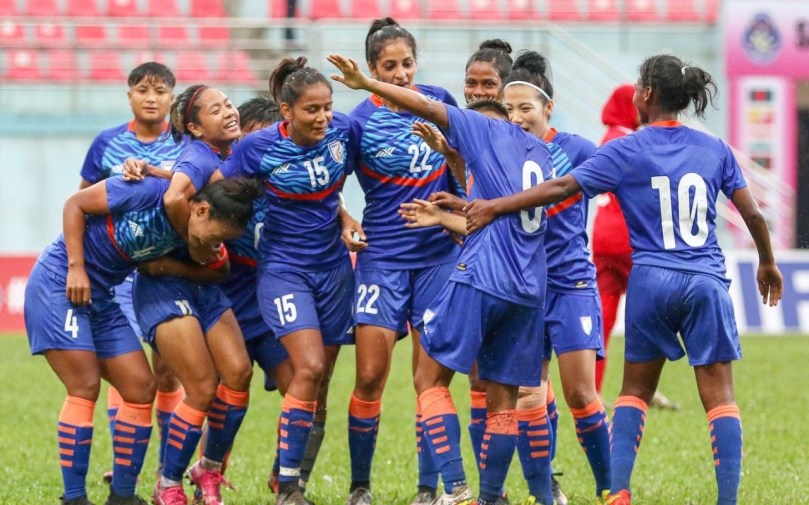 FULL-TIME! What a performance this has been by the #BlueTigresses 🐯

A class apart in the second half, as we take a big win home against Maldives 🙌

Anju Tamang was the star of the show, netting four goals, as Dangmei Grace scored two. Priyangka Devi, Soumya Guguloth, and Kashmina added one each to make it 9-0 in India’s favour.

The Blue Tigresses earned four corners in the first 10 minutes itself. The Maldives defence found it hard to keep them at bay, and India surged into the lead in the 24th minute. Anju Tamang and Ranjana Chanu worked on a short corner, and the former cut inside and took a shot which dipped into the top corner.

One goal up, the Blue Tigresses pressed forward, and doubled their lead through Priyangka, who smashed home a cross from Ashalata Devi. Anju added a third just seconds before the half-time whistle, when she tapped in a rebound that came off a powerful shot by Ratanbala Devi.

Changing over, India picked up where they left off. In the 53rd minute, Dangmei Grace got her name on the scoresheet, when she rounded the goalkeeper and poked it home.

Minutes later, substitute Soumya Guguloth made it 5-0, tapping in a cross by captain Ashalata Devi.

India kept on attacking the Maldives third, and the effort saw a flurry of goals in the last 10 minutes of regulation time. Substitute Kashmina Rai got her name on the scoresheet when her long-ranger was spilled over the line by Maldives keeper.

A minute later, the Maldives custodian again spilled a cross from Ranjana Chanu, and Anju Tamang was on hand to complete her hat-trick. Dangmei Grace made it 8-0 with a long-ranger, and with two minutes of regulation time left on the clock, Anju completed the rout nodding in a Ranjana cross.

India next play their last group stage match against Bangladesh on September 13.