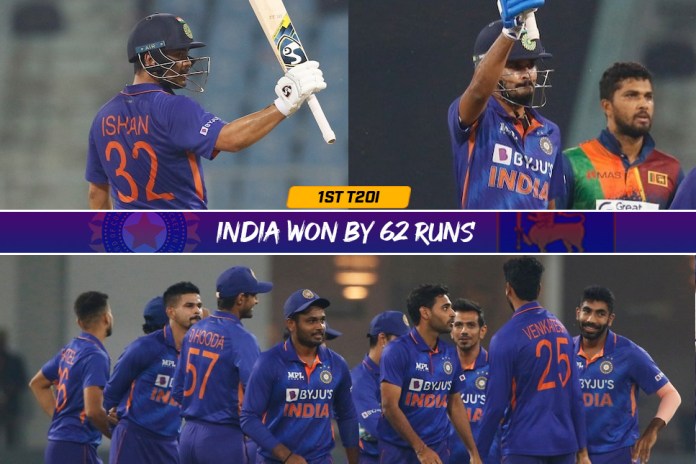 Ishan Kishan gave a glimpse of his enormous potential with a 56-ball-89 before the bowlers joined the party in India’s clinical 62-run demolition of Sri Lanka in the first T20I to take a 1-0 lead in the three-game series here on Thursday.

This was also India’s longest winning streak in T20Is which has now gone up to 10 matches.

India have now won their last 10 consecutive T20Is (since November 2021)- their longest winning streak in this format.

The overall T20I record is 12 consecutive wins shared by Afghanistan and Romania.#INDvSL #INDvsSL

Chasing 200, Sri Lanka got off to the worst possible start as the side two wickets inside three overs. Bhuvneshwar removed both openers Pathum Nissanka and Kamil Mishara as Sri Lanka struggled in the chase.

Sri Lanka reach the 50-run mark in the tenth over but lost two more wickets. Charith Asalanka did hit a fifty for the visitors but the asking rate was too much to ask for as Sri Lanka lost momentum. The visitors needed 102 runs in the last four overs and the visitors were completely outplayed in the first T20I as they lost the match by a considerable margin.

With this 62-run win over Sri Lanka, India took a 1-0 lead in the three-match T20I series. Both teams will now lock horns in the second T20I on Saturday.

Earlier, Ishan Kishan breathed fire in the Indian inns. He made full use of the opportunities to slam 89 runs off just 56 balls. Rohit Sharma also created a world record with most T20I runs. Shreyas Iyer did the rest of the job with 28-ball 57 to ensure India set 200 runs target for the visitors in the opening contest.

It was a solid start from India as Rohit Sharma and Ishan Kishan scored 58 in the powerplay. The duo continued firing before Lahiru Kumara removed Rohit in the 12th over as India reached 111/1. Meanwhile, Ishan continued slogging and took India’s score over the 150-run mark, however, Shanaka dismissed him in the 17th over. In the end, Shreyas and Ravindra Jadeja stitched an unbeaten 44-run stand to help India post a mammoth total of 199/2.

India have now won their last 10 consecutive T20Is (since November 2021)- their longest winning streak in this format.

The overall T20I record is 12 consecutive wins shared by Afghanistan and Romania.#INDvSL #INDvsSL