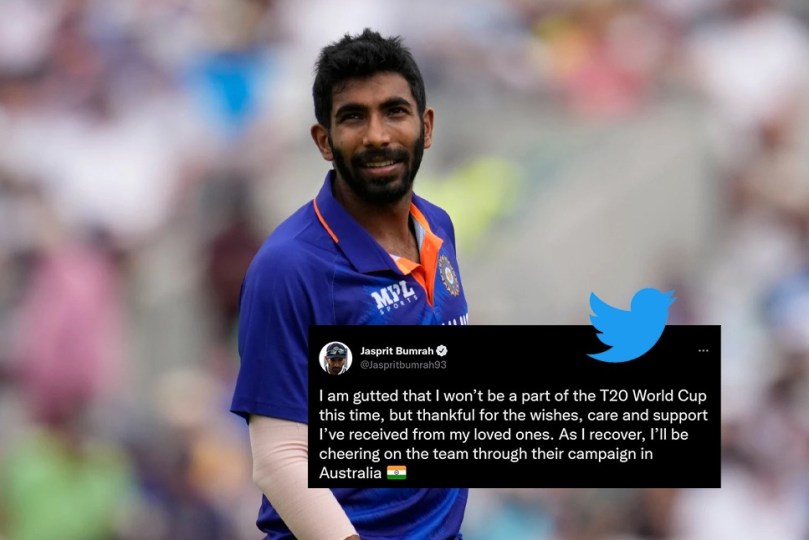 INDIA T20 WC Squad – Jasprit Bumrah GUTTED: Jasprit Bumrah has said he is completely gutted with missing out on ICC T20 World CUP in Australia. India’s premier bowler has Posted on his Twitter, ‘I am gutted that I won’t be a part of the T20 World Cup this time. As I recover, I’ll be cheering on the team through their campaign in Australia’. It is worth noting that BCCI is yet to announce Bumrah’s replacement for the Indian Squad: Follow IND vs SA LIVE & INDIA at ICC T20 World CUP LIVE Updates with InsideSport.IN

I am gutted that I won’t be a part of the T20 World Cup this time, but thankful for the wishes, care and support I’ve received from my loved ones. As I recover, I’ll be cheering on the team through their campaign in Australia 🇮🇳 pic.twitter.com/XjHJrilW0d

INDIA T20 WC Squad – Who Replaces Jasprit Bumrah? The Board of Control for Cricket in India (BCCI) and the National selectors are in a fix over the replacement of Jasprit Bumrah. The Indian pace spearhead was officially ruled out of the equation for the upcoming ICC T20 World Cup 2022 on Monday. Mohammad Shami, one of the four standbys that the national selectors had announced for the showcase event in Australia, should have been the straightforward candidate to replace Bumrah. But concerns have subsequently been raised about his readiness and hence selectors are now also mulling over the name of Mohammed Siraj.

The BCCI release declaring Bumrah’s ineligibility for the WC serves as additional proof that the decision to replace him with Shami is not going to be simple.

A BCCI statement on Monday stated that “the BCCI would be appointing a replacement for Jasprit Bumrah in the squad for the marquee tournament soon.” Shami would have been a natural replacement in another situation.

It is understood that Shami might still be drafted after he PROVES that he is physically fit.

The other option before the national selectors and team management is Mohammed Siraj. Siraj is Bumrah’s replacement in the T20I team for the ongoing series against South Africa.

Has Shami fully Recovered? Shami or BCCI is yet to officially declare that Shami has fully recovered. Shami from his side recently posted a video showing him bowling at the NETS at his FARMHOUSE.

The national selectors want Shami to play atleast one game before he is picked for T20 World CUP. But Shami’s name doesn’t figure in the team announced for the South Africa ODI Series.

This clearly shows that selectors are still not sure if Shami is fully fit or not. This is the reason now seasoned pacer has been called for FITNESS Test to NCA. It is expected that Shami’s FITNESS Test will be either conducted on Wednesday or Thursday

Before being named to the World Cup roster, both the national selectors and the team management wanted Shami to play in a game. It will be intriguing to watch how things turn out, but Shami and Siraj are likely to be in a tie for the position.

Meanwhile in-case Shami fails to prove his fitness – Siraj is expected to be picked ahead of others as Bumrah’s replacement.

When India Leaves for T20 World CUP? While Team India are set to leave for Australia on October 6, Shami could be asked to stay back and join the World Cup squad later when the reserves leave after SA ODI series. India will play two warm-up games on October 17 and 19 against Australia and New Zealand.

India will also play Western Australia in a practice match on October 12. Before that, the team management would want Shami to get back to 100% match fitness.