IND vs NZ 1st Test, Day 3 Stumps: India take 55-run lead: After Tom Latham and Will Young’s resistance, Indian spinners fought back to the game with Axar Patel shining once again. Patel bagged 5/62 as New Zealand were bowled out for 296 in the first innings with India taking 49-run lead. At Day 3 stumps, India posted 14/1 with a lead of 55 runs. Follow India vs New Zealand Test LIVE Updates on InsideSport.IN

After a huge 151-run opening partnership between Tom Latham and Will Young, India made a fine comeback. With the pitch offering hardly any offer for the bowlers, India struggled in the first one hour. However, after Ravi Ashwin removed Will Young, the flood gates opened.

Axar Patel triggered the collapse with Ross Taylor’s wicket after Umesh Yadav trapped Kane Williamson leg before. Even though Tom Latham continued to put pressure on Indian bowlers, the rest couldn’t live up to the expectation.

Henry Nicholls, Tom Blundell, Tim Southee all failed to put up a resistance. Although Kyle Jamieson tried his best but Ashwin sent him back. As for Axar Patel, he continued his golden run in Test cricket, bagging his fifth fifer in just four Tests to take his tally to 32 wickets in just four matches. In the end, New Zealand folded for 296 handing over 49-run lead to the hosts in Kanpur.

However, India didn’t do well bad light either. They lost Shubman Gill in an exactly similar fashion to the first innings. Kyle Jamieson’s inswinger cleaned up Gill’s stumps as India posted 14/1 at Day 3 stumps, 55 runs ahead.

9:30 AM IST: KS Bharat is keeping in place of Wriddhiman Saha. The wicketkeeper has a stiff neck.

UPDATE – Wriddhiman Saha has stiffness in his neck. The BCCI medical team is treating him and monitoring his progress. KS Bharat will be keeping wickets in his absence.#INDvNZ @Paytm

9:15 AM IST: “I don’t think the ball will swing and if it doesn’t swing, I don’t know what I will do. Will bowl two overs and then come up with a plan,” Ishant Sharma puzzled. 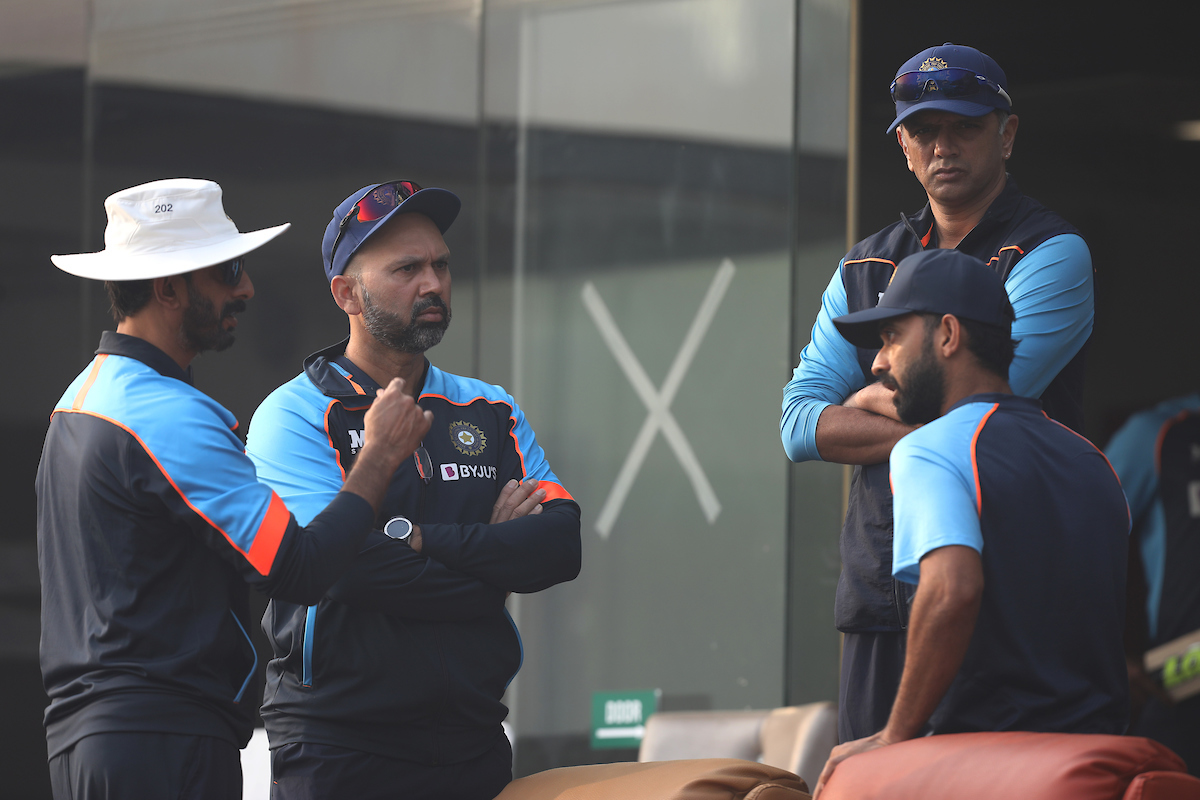 9:05 AM IST: Bowling coach Paras Mhambrey is having a chat with the bowlers. Ashwin holds the key and he is seen motivating others.

8:40 AM IST: Tom Latham who got three times lucky to a DRS will be eyeing for a big score. His partner Will Young has looked impressive and just 25 runs from a century. The duo have already shared unbeaten 129 runs for the opening wicket.

8:30 AM IST: We are just an hour away from LIVE action on Day 3. The game hangs in balance as India and New Zealand shared Day 1 & Day 2 respectively. R Ashwin and Co will have to weave their magic to ensure a great start for Team India who are yet to get a breakthrough against Kiwis in their first innings.

IND-NZ Test Day 2: New Zealand dominated right from the start of Day 2 as Tim Southee picked up 4 wickets restricting the host to a modest total of 345 runs. Later, Tom Latham and Will Young frustrated India as the Kiwi duo returned unbeaten as New Zealand score read 129/0.

Earlier, Shreyas Iyer’s maiden 100 along with the fifties from Shubhman Gill and Ravindra Jadeja helped the host post 345 runs total. Speaking at the press conference after the match, Iyer stressed India’s challenges with the bowl on the field but affirmed that one wicket would change the dimension of the game on Day 3.

“It’s gonna be a really challenging day tomorrow (Day 3). The wicket is not helping the bowlers. So, we have to focus on trying to give less runs as much as possible and try to build more pressure. One wicket would completely change the momentum towards us. Once it starts to spin or some cracks start to open on the wicket, it will shift the momentum. Hoping we get off to a good start,” he said at the press conference.