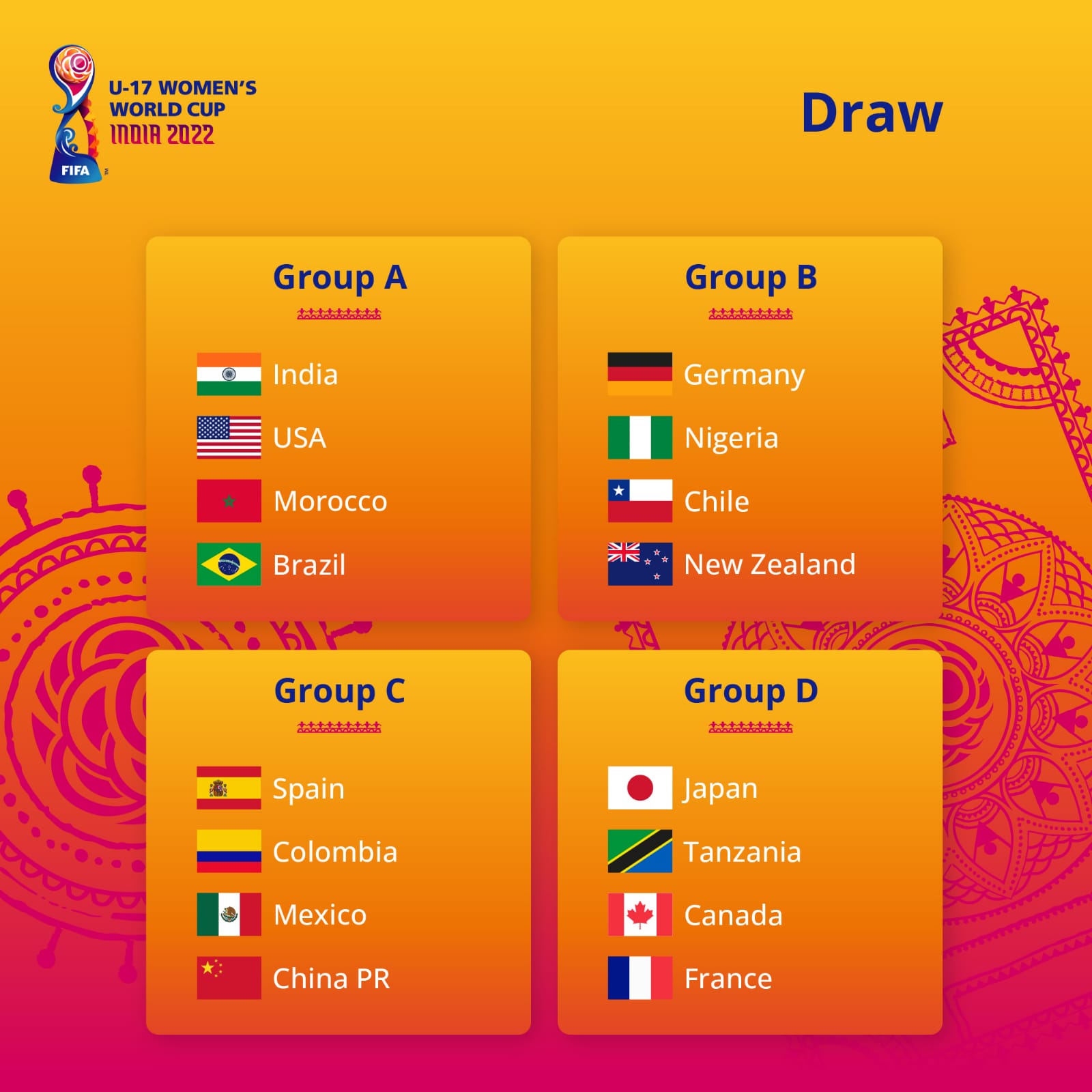 A total of 16 countries including hosts India will be participating for the first time in this tournament. After successfully hosting the FIFA U17 Men’s World Cup in 2017, India will be hosting yet another FIFA event. The draws for the finals took place in Zurich today where the 16 teams were slotted into 4 different groups.

“Today’s draw not only marks an important milestone for India as a host nation but also for the global football community. That this draw and the subsequently tournament is able to take place safely is a testament to the hard work of those involved,” FIFA President Gianni Infantino said during the draw.

“We now look forward to watching the finest young players representing 16 nations from around the world in India later this year. As a direct result of this tournament, a new generation of women inspired to follow in the footsteps of those they see playing in October will be created,” he concluded.

Group A is potentially considered the group of death. It consists of host India clubbed alongside USA, Brazil, and Morocco. Both the United States of America and Brazil are powerhouses in women’s football and will pose a tough challenge for the young India eves. On the other hand, this is the first appearance for Morocco in the finals. They became the first North African nation to participate in the finals after defeating Ghana in the knockouts.

Drop in your quarterfinal predictions below 👇 as the teams now prepare to #KickOffTheDream 🎇 from 11th October at the FIFA #U17WWC India 2022 🏆 pic.twitter.com/L2WGwx5ahF

Group C will see the likes of Spain, Colombia, Mexico, and China PR facing each other. Group C can serve as a redemption for Mexico, as the runners-up of 2018 take on the Champions in 2018, Spain. Both China and Colombia have not crossed the group stage previously and will look to challenge the likes of both Spain and Mexico.

The last and the final group of the FIFA U-17 Women’s World Cup will see Japan, Tanzania, Canada, and France locked in individual battles against one another. Tanzania like India and Morocco is making its debut in the competition. The previous champions of 2012 France and 2014 Japan will be the top 2 teams in the group. Canada making their 7th appearance this year will also eye a chance to top the group.

Following the conclusion of the group games on 18th October, the top two teams from each group will progress to the quarterfinals. Navi Mumbai will kick off the double header knockouts on 21st October where winners of Group A will face the runner-up of Group B and following soon, the winners of Group B will take on the second-placed team from Group A.

The other set of quarterfinal games will take place on the next day with the first and second placed teams of Groups C and D competing against each other to earn the right to remain in Goa for the semi-finals on 26th October.

All four teams will subsequently head to Navi Mumbai to compete in the third-place match and the showpiece final to wrap up India’s first-ever FIFA women’s competition on 30th October.