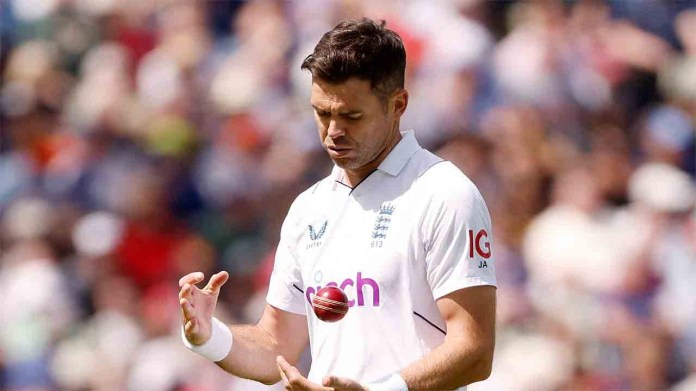 IND vs ENG 5th Test: India England Edgbaston TEST LIVE-England pace bowler James Anderson has said his team will take confidence from the fact that India too were in a similar situation in the rescheduled fifth Test here before they came back strongly to put up an imposing 416 on the board here on Saturday.Follow IND vs ENG 5th Test updates with InsideSport.IN

India were struggling at 98/5 when vice-captain Rishabh Pant played a memorable innings of 146 runs and shared a 222-run partnership with Ravindra Jadeja (104) to guide the visitors to a 300-plus total before skipper Jasprit Bumrah’s blitzkrieg took India to 416 on Day 2 of the Test.

In reply, England are in an almost similar situation at 84/5 going in Day 3 still trailing India by 332 runs, with hero of the Test series against New Zealand Jonny Bairstow (12 not out) and skipper Ben Stokes at the crease.

IND vs ENG 5th Test: India’s fightback gives us confidence we can do something similar, says James Anderson

‘We’re in a similar situation to them, and that gives us confidence we can do something similar,’ Anderson was quoted as saying by The Guardian. ‘We’ve all got a job to do down the order, we’ve got to put on some big partnerships and put some pressure back on India.

‘I’ve got a fair feeling our best line of defence will be attack. The way we’ve got ourselves out of sticky situations in the last few weeks has been by trying to put pressure back on the opposition, and I don’t see this being any different. We want to score, we want to move the game forward, and that’s what we’ll try and do.’

Stokes and Bairstow had bailed out the hosts against New Zealand in the second Test at Trent Bridge from an almost similar situation and the team went on to win the match.

Anderson added that there were no issues with England’s line and length on the first two days, saying that Pant playing an ‘amazing innings’ was the key to the tourists’ fight-back.

IND vs ENG 5th Test: India’s fightback gives us confidence we can do something similar, says James Anderson

‘I actually thought we bowled well yesterday morning and into the afternoon…and then Pant played an amazing innings. He’s extremely talented, he’s got all the shots and he’s not afraid to play them, so he’s a difficult guy to bowl at,’ added Anderson.

Talking about the most expensive over bowled in Test history by Stuart Broad, which leaked 35 runs on Saturday, Anderson said, ‘Sometimes it can be easier to bowl to top-order batsmen, I remember a few balls I bowled to Mohammed Siraj today (Saturday) where he tried to hit two out of the ground and then played a perfect back-foot defensive to the next one, so it can be tricky to get into a rhythm against them (tail-enders). You’ve just got to back yourself that your best ball will get them out eventually.’