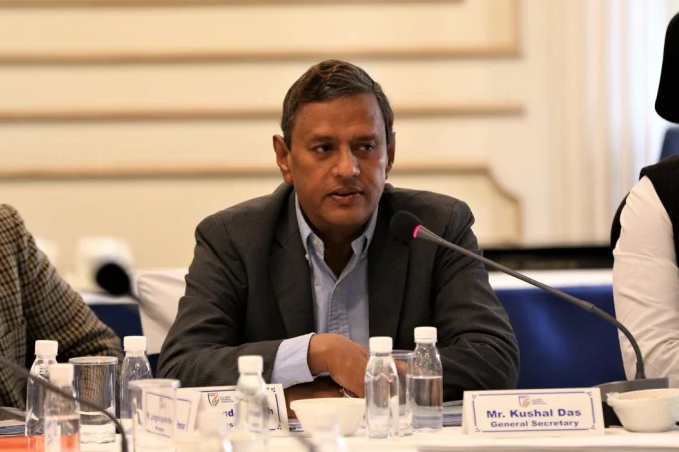 Kushal Das Molestation Case: AIFF Secretary Kushal Das given ‘CLEAN CHIT’ by Investigating Officer over Molestation Charges- All India Football Federation general secretary Kushal Das has been cleared of the charge of molesting employees at the workplace by the sports body’s integrity officer, who termed the allegations “frivolous and devoid of truth” in his report. Follow InsideSport.IN For more updates

Entrepreneur Ranjit Bajaj, who previously owned I-League club Minerva Punjab FC, on Monday alleged that Das had molested employees at workplace, a charge that was outrightly by the AIFF and its top official.

The AIFF’s integrity officer, Javed Siraj said he has come to the conclusion after conducting the inquiry which included questioning of the presiding officers of the federation’s internal complaints committee over the years.

Lt Col B M R Mehta (Retd), who is AGS (administration) at AIFF, was also sent a questionnaire by Siraj.

“All the presiding officers of the committee namely Shanta Gopinath, Manager, Jyotsna Gupta, EA, Indu Chaudhry, Sr Manager and Mr Col Mehta AGS Admin were questioned by sending questionnaires. All of them have stated that no complaint of sexual harassment was received against Mr Kushal Das or any employee of AIFF and no case of sexual harassment ever occurred in the AIFF,” he stated in his confidential report.

“This is specifically with regards to the tweet of Mr Bajaj about an incident allegedly happening at Taj Mahal Hotel New Delhi. He has stated that there was no question of suppressing anything since there had been no complaint.”

Bajaj, who sold off Minerva Punjab FC in 2020 after owning it for seven years, had said there were “two cases of molestation of employees at workplace” and the head of the committee which deals with sexual harassment complaints at the AIFF was “forced by president Praful Patel to bury the report”.

However, the AIFF integrity officer said he did not find Bajaj’s allegations to be true after his inquiry.

“Regarding the tweet pertaining to incident dated 14.02.2020 after the IWL (Indian Women’s League) Final in a restaurant near Chancery Hotel Bengaluru, Mrs Indu Chaudhry, Sr Manager was questioned and she replied that “there is no comment to make on the attached tweets”.

“Therefore, Mr Sunando Dhar, CEO of League department was questioned and he has stated that he was present in the after tournament dinner with other AIFF and KSFA officials but no molestation incident was seen by him, neither he received any report mentioning this issue.

“Mrs Shanta Gopinath was heading the Internal Complaint Committee during that period and she has already denied having received any complaint.”

“From the above facts it is clear that the allegations levelled against Mr Kushal Das, General Secretary AIFF is totally baseless, frivolous and are devoid of truth,” the report said.

Soon after the allegations against Das, the AIFF said it will refer the matter to the Executive Committee, and also to the AGM for appropriate action.

Bajaj and the AIFF had been at loggerheads in the past with the national federation suspending him for one year in 2018 after being found “guilty” of making racist remarks against a referee.

In 2019, the AIFF had reprimanded Bajaj for his criticism of the federation on social media. The AIFF found the criticism derogatory in nature, and Siraj’s confidential report also touched upon that.