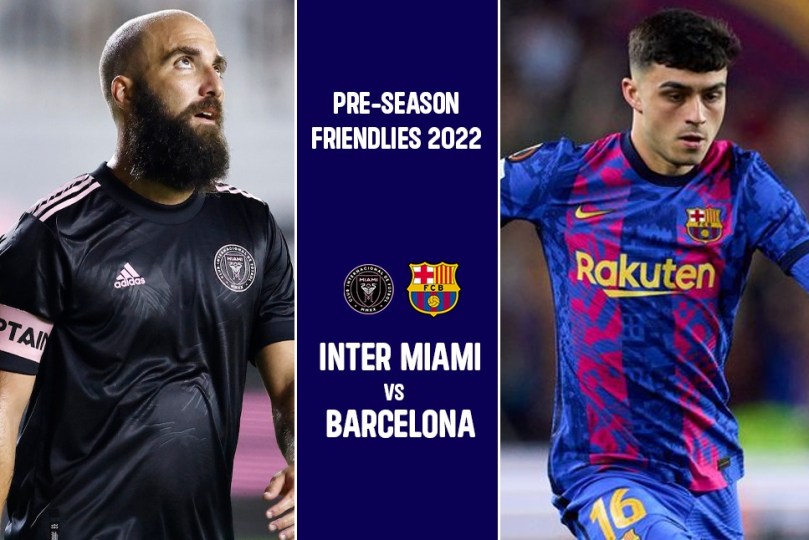 Inter Miami vs Barcelona LIVE: Barcelona Pre-Season friendlies 2022 – Barcelona will continue their preparations for the 2022-23 campaign with a pre-season friendly…

Inter Miami will again definitely be without the services of Robbie Robinson and Ian Fray through injury, while Ariel Lassiter and Brek Shea are doubts for the home side.

Damion Lowe was also substituted at the interval of the clash with Charlotte FC last time out, which could see former Arsenal defender Gibbs feature at the back.

Higuain will be hoping to have the chance to feature against Barcelona, but the experienced striker is expected to start on the bench, with Leonardo Campana set to lead the line once again.

Lewandowski is with his new teammates in Miami, so there is a chance that the experienced striker could make his debut for the Catalan side in this match.

Christensen and Raphinha could also make their debuts, while Kessie, who played 45 minutes against Olot last time out, will be hoping to feature for the second time for his new club.

Highly-rated teenager Pablo Torre has also made the move to Barcelona this summer, and the Spaniard will be eyeing another appearance on Tuesday night.

Xavi is expected to select a strong side for the first whistle, with Gavi, Pedri and Ferran Torres potentially included, while Ousmane Dembele could also feature, having rejoined the club last week. A decision will also have to be made on De Jong’s involvement amid the recent speculation.

MIA vs BAR Friendly LIVE: When, where and how to watch Inter Miami vs Barcelona Pre-Season Live Streaming in India?

When will Inter Miami vs Barcelona be played? – Date

What time will Inter Miami vs Barcelona be played? Time
MIA vs BAR match will kick-off at 5:00 AM IST

Where will Inter Miami vs Barcelona be played? – Venue
MIA vs BAR will be played at the DRV PNK Stadium

For fans in India the match will be live streamed on FC Barcelona’s official App BarcaTV+. Fans can also follow the action and match buzz through the team’s social media accounts.