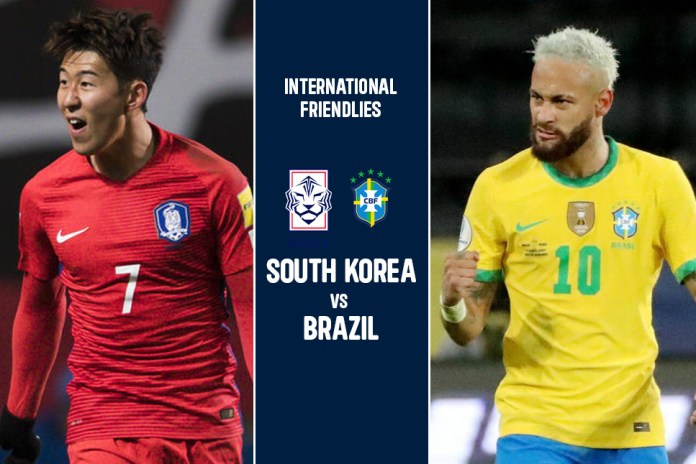 International Friendlies 2022: South Korea vs Brazil Live Streaming: Brazil will play their first international friendly since the end of 2019 on Thursday, with the South American nation taking on South Korea at the Seoul World Cup Stadium. Both teams have qualified for the 2022 World Cup, and five-time world champions Brazil will be regarded as one of the favourites to lift the trophy in Qatar. Follow South Korea vs Brazil live with InsideSport.IN

South Korea will be captained by Tottenham Hotspur attacker Son Heung-min, who scored 23 Premier League goals during the 2021-22 campaign.

There is a mixture of youth and experience in their latest squad, and there is also expected to be another representative from the Premier League in the shape of Wolverhampton Wanderers attacker Hwang Hee-chan.

Hwang Ui-jo has scored 14 times in 44 appearances for his country, meanwhile, and the Bordeaux striker is set to lead the line for the home side in this match.

Brazil will need to make checks on Alisson Becker, Eder Militao, Casemiro, Fabinho, Vinicius Junior and Rodrygo due to their involvement in Saturday’s Champions League final between Liverpool and Real Madrid.

Neymar grabbed his right foot and fell to the turf after colliding with a teammate during the session at Seoul World Cup Stadium on Wednesday. He was quickly attended to by a trainer and limped off the field, but did not return.

Head coach Tite is expected to shuffle his pack for this contest, with Rodrygo potentially being given a start on the right, while Paqueta could operate as the 10.

Richarlison has now scored 13 times in 34 appearances for his country and is set to lead the line, but Gabriel Jesus is also pushing for a start at centre-forward.

South Korea vs Brazil LIVE: When and where to watch International Friendlies Live streaming?

When will South Korea vs Brazil kick-off? Date

The match between South Korea vs Brazil will kick-off on 2nd June, 2022

What time will South Korea vs Brazil kick-off? Time

South Korea vs Brazil will kick-off at 4:30 PM

Where will South Korea vs Brazil be played? Venue

Where do I watch live streaming of South Korea vs Brazil in India?

Unfortunately, Fans in India won’t be able to live stream the game between South Korea vs Brazil. Live Telecast for the same won’t be provided, although fans can follow live updates on the team’s official social media sites.