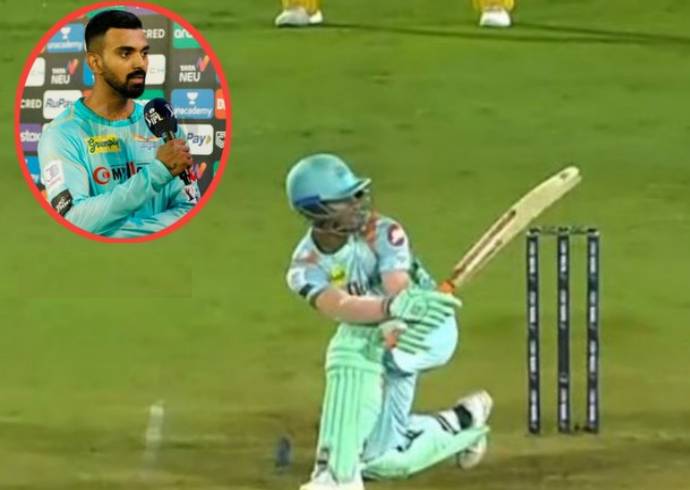 IPL 2022-  LSG beat CSK Highlights: The Delhi cricket fraternity and DDCA officials must be embarassed seeing Ayush Badoni firing all cylinders for Lucknow Super Giants. DDCA completely ignored this RAW-TALENT and did not even include him in the Delhi Ranji Squad. But Badoni’s SHOW in ongoing IPL 2022 has got his skipper KL Rahul completely floored. According to Rahul, Badoni is great WHITE-BALL prospect for India: Follow LSG beat CSK Highlights and IPL 2022 LIVE Updates with InsideSport.IN.

“Badoni, I’d seen a few videos, when you only get to see the good shots, but the way he’s been batting is phenomenal. Strong, 360-degree player, a great find for India and an asset for white-ball cricket,” Rahul said at the post-match presentation here.

LSG beat CSK Highlights – Ayush Badoni in IPL: Badoni has so far played 2 innings in IPL 2022. In both the innings he showed his RAW-TALENT & undisputed 360-degree shot making skills.

Just imagine the same cricketer just a month back was not even considered for Delhi State team. Despite requests from Rahul Dravid, WV Raman who considered Badoni as great-talent, DDCA Selectors ignored his exploits.

How Badoni joined Lucknow Super Giants? LSG assistant coach Vijay Dahiya had kept an eye out for Badoni for a couple of years.

He has been in touch with Badoni for some months. Dahiya according to few reports showed his videos to LSG mentor Gautam Gambhir & captain KL Rahul.

Gambhir was completely taken aback by the RAW TALENT that Badoni possess and immediatley decided to blood him for LSG.

IPL 2022-  LSG beat CSK Highlights:  Badoni (19 not out in 9 balls), who scored a half-century in the previous game, joined forces with Evin Lewis (55 not out) towards the end to help the Super Giants chase down a mammoth 211-run target.

The skipper also lavished praise on another youngster — leg-spinner Ravi Bishnoi — who did a brilliant job and was the most economical bowler for his side, registering figures of 2/24.

“Bishnoi has a big heart, he’s a fighter for a little guy, shows the character he has to bounce back (from the last game) with a wet ball. Really happy for him. He wants to grow, wants to learn, and (it is) good to see that,” Rahul added.

Chennai captain Ravindra Jadeja rued the missed catches by his team, including the drop catch by Moeen Ali to let off Quinton de Kock on 30. De Kock went on to make 61.

“We had a very good start, Robbie (Uthappa) and Shivam Dube were playing brilliantly. We had a good start, but in fielding we have to take catches, then you’ll win matches. We should have taken those chances.

“There was a lot of dew, the ball wasn’t sticking to the hand. Next time, we have to practice with the wet ball. We batted brilliantly in the top six and in the middle overs. The wicket was very good to bat on. As a bowling unit, we need to execute our plans.”