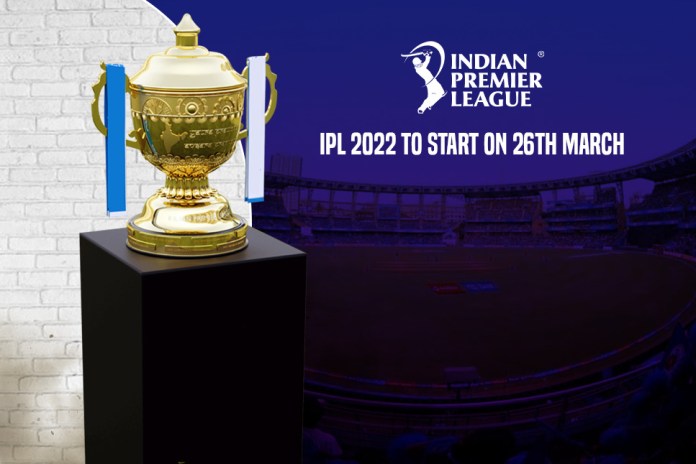 IPL 2022 GC LIVE –  IPL Dates & Schedule: The IPL Governing Council has decided the starting date of Season 15 of IPL. The IPL 2022 will start on 26th January as earlier reported by InsideSport. The finals of the league will be played on 29th May. IPL GC meeting is currently in progress. Brijesh Patel led IPL GC has decided that all league matches will take place in Maharasthra. The decision on the venue for the playoffs will be taken on a later date: Follow IPL 2022 LIVE Updates & IPL GC Meeting LIVE Updates with InsideSport.IN

“IPL 2022 will start on 26th March. IPL this year will be played in Maharashtra. We are confident that some percentage of spectators will be allowed at the stadiums. We will go by the Government guidelines”, confirmed BCCI Vice President Rajeev Shukla

IPL GC also has also committed themselves to start women IPL by next year.

IPL Dates & Schedule: InsideSport has already reported that the 3 venues in Mumbai will host 55 League matches of IPL 2022 & Pune will host rest of the 15 league games.

IPL 2022 is all set to start on March 26th with finals scheduled on 29th May. The IPL GC today will officially finalize, ratify & release the Dates, Schedule & Venues of IPL 2022.

The playoffs & finals are proposed to be played in Ahmedabad.

IPL 2022 Dates: A total of 55 matches will be spread over three venues in Mumbai. While Reliance Stadium was also in contention, the BCCI has locked in on Wankhede Stadium, DY Patil Stadium and CCI’s Brabourne Stadium. Pune’s MCA Stadium will host rest of the 15 group stage matches.

IPL 2022: Another twist in tale in Punjab Kings camp, not Shikhar…

Further, all teams are set to play four games each at the Wankhede, DY Patil Stadium and three apiece at Brabourne and Pune.

As reported by InsideSport earlier, the IPL 2022 will likely start on March 26 followed by a doubleheader on March 27 after a request from official broadcaster Star.

BCCI is expected to fetch amount above 40,000 Crore for the 5 years of media rights with media & ecommerce giants like Disney Star, Reliance, Amazon & Sony in fray.

IPL Media Rights Tender to be released before end of February, Reliance & Amazon ready to challenge…