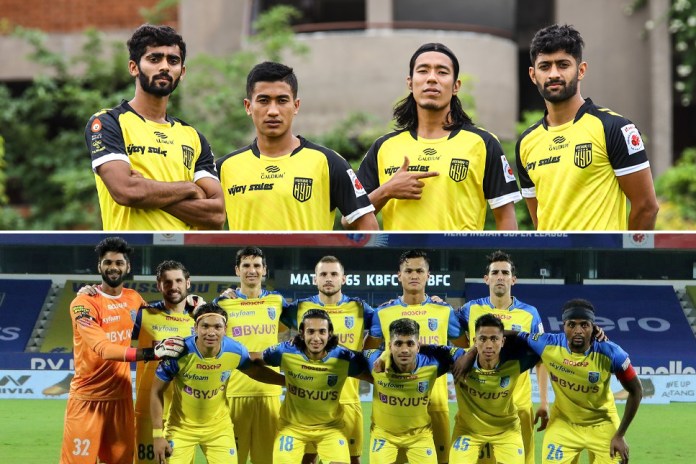 ISL 2022 final: Kerala Blasters fans unhappy as KBFC to play final vs Hyderabad FC in black and blue stripes instead of traditional yellow kit – Check why

This is the Blasters’ third appearance in the ISL final. Hyderabad FC will play in the first final. Whoever wins the title will get a new champion in the ISL this time. The Kerala Blasters reached the semi-finals by defeating Jamshedpur FC 2-1 in both quarters to clinch the League Winners’ Shield. Hyderabad FC beat last season’s runners-up ATK Mohan Bagan 3-2 to reach the final.

The stage is set for a new #HeroISL Champion 🏟🏆

ISL 2022 final: Why is the Yellow jersey so significant/Important?

There is no actual significance for the yellow jersey, but since it a home jersey and a traditional kit for Kerala Blasters they would be happier to don the yellow kit as they look to win the ISL Final against Hyderabad FC.

Although not to be very superstitious, but teams who wore the yellow jersey yesterday won their games and they include big names such as Liverpool beat Arsenal at the Emirates Stadium in the Premier League while Chelsea also wore their yellow kits after beating Lille in the Champions League Round of 16, Juventus were knocked out of the UCL by the Yellow Submarine Villarreal and finally Hyderabad FC beat ATK Mohun Bagan in the 2nd Leg of the Semi-Finals of the ISL.

Hyderabad-FC Enters Finals: Hyderabad team enters FINALS despite losing the second leg of the semi-final 0-1. Roy Krishna scored in the 79th minute to give ATKMB a glimmer of hope but in the end, it was not enough for the finalists of last season as Hyderabad booked a final date with Kerala Blasters.

Hyderabad had won the first leg 3-1 through goals from Bartholomew Ogbeche, Yasir Mohammad and Javier Siverio. Hyderabad head coach Manolo Marquez fielded the same team that won the first leg 3-1 while Juan Ferrando made a few changes to the ATKMB side from the last game with the ever-dependable centre-back Tiri being left out due to injury he picked up in the last game.

Kerala-Blasters Road to Finals:  On the other hand, it has been a long and agonising wait for the trophy for the Kerala Blasters. They defeated Shield Winners Jamshedpur FC in the semifinals to clinch their finals berth for the third time in their history.

This time they are convinced that the ISL trophy will go to Kochi as Ivan Vukomanovic’s men are in great touch and have been playing breathtaking football. Therefore it promises to be a high voltage clash between two well-oiled teams.

The global football community can also watch the League LIVE in almost 100 countries.

ISL 2022 final: Kerala Blasters fans unhappy as KBFC to play final vs Hyderabad FC in black and blue stripes instead of traditional yellow kit – Check why