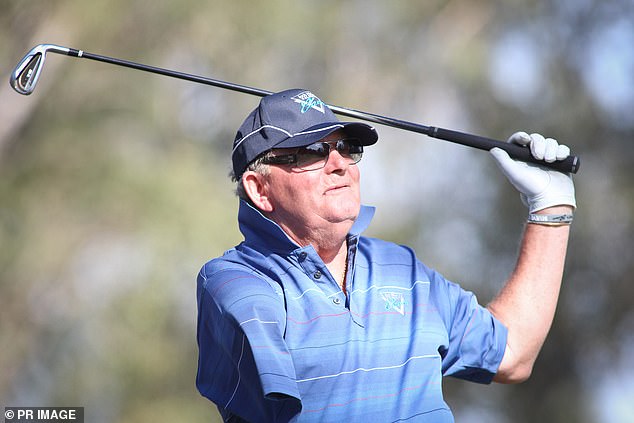 Tributes have started flowing in from the golfing and NRL ranks for lovable larrikin Jack Newton who has passed away from health complications at the age of 72.

The former Australian Open champ who came agonisingly close to winning the British Open and US Masters, lost his arm and eye in 1983 when he ran into an aeroplane propeller at Sydney Airport.

Newton was awarded the Medal of the Order of Australia on 11 June 2007 for services to golf, particularly through his roles in executive, youth development, and fundraising.

The Sport Australia Hall of Fame inducted Newton as a general member on 13 October 2016, recognising his contributions to junior golf development.

He held an annual competition for golfers and celebrities to raise money for diabetes charities that was famously attended by former Australian PM Bob Hawke and Newton continued to play the game he loved, even with just one arm and one eye.

The loss of Newton was felt heavily in the golfing community, with PGA of Australia CEO Gavin Kirkman leading the chorus of tributes. 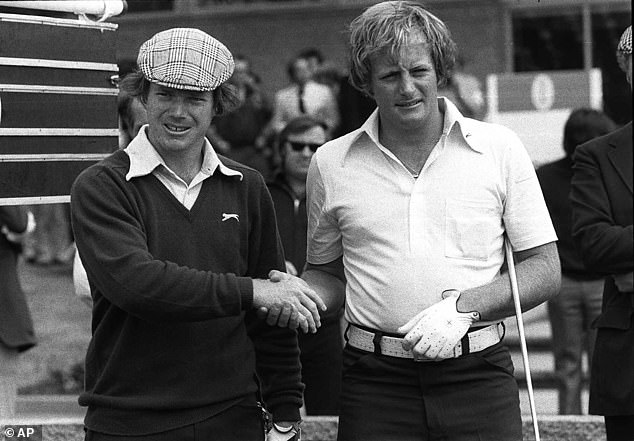 Jack Newton [right] of Australia shake hands before the playoff to decide the winner of the British Open Golf Championship, in Carnoustie, Scotland in July 1975.

‘Jack has been such an influential figure in Australian golf and his contribution and legacy will live on for many decades to come,’ Kirkman said.

‘He was as tough off the course as he was on it yet underlying everything was his deep passion for the game of golf and the positive impact it could have on people’s lives, particularly young people.

‘Today, our thoughts and best wishes are with the Newton family and the countless friends he met along the way but Jack Newton’s name will forever hold an important place within Australian golf.’

Rest in peace Jack. We can’t overestimate the influence he had not only as a golfer but as an amputee with profile. Visible and not backing down. ‘Jack Newton dead at 72: How did Australian golf legend die’ https://t.co/qNeU0Nbna5 via @newscomauHQ

Vale Jack Newton, will never forget his wicked sense of humour, his love of Newcastle, his passion for golf and he gave so much back to the game. Thoughts with his beautiful family #JackNewton 🙏

Aussie golfing legend and 2021 PGA TOUR Champion at the Boeing Classic Rod Pampling said: ‘Sad to hear the news of Jack Newton, a lot of great memories off the course at dinners. Rip’.

‘Jack Newton gave so many young Aussies opportunities – not just in golf but in life. What an inspirational human he was and a fabulous legacy he’s left. A true Australian icon.’

Aussie golfer James Nitties said that Newton will be remembered for his influence and work for charity organisations along with his golfing legacy.

‘Jack Newton not only an amazing golfer but what he and his family did for charity and junior golf in Australia was truely amazing. Rest in peace,’ he said.

The PGA of Australia is deeply saddened by the passing overnight of Jack Newton OAM. His playing career and promotion of junior golf through the Jack Newton Junior Golf Foundation will ensure his legacy forever remains embedded within Australian golf.https://t.co/sf31JsSJsQ

Leading Network TEN golf commentator Luke Elvy shared memories of Newton from his youth as an aspiring golfer and also from his adult years.

‘As a young boy playing golf in NSW, Jack Newton’s Jr foundation was great fun. As an adult getting to know Jack & work with an Aussie legend was everything. His rare golf talent, charisma & larrikin behaviour was intoxicating. Shattered for Jackie & family,’ he Tweeted.

We are deeply saddened by the passing of Jack Newton OAM. Our thoughts and prayers are with former Storm premiership player Clint and the whole Newton family at this difficult time.

Grew up with Sandy Roberts, Renton Laidlaw and of course Jack Newton.Not only could he play the game but brought colour and life to the game of golf #ripjack ⛳️👍😎 https://t.co/SO8sWbx4ug

Newton’s son, Clint, played for NRL club Melbourne Storm and the footy side have also paid tribute to the golfer and offered their support to the premiership winner.

Geoff Trappett Chair of The National Inclusive Transport Advocacy Network (NITAN) also paid tribute to Newton for his work in working toward inclusion for amputees across Australia.

‘Rest in [peace] Jack. We can’t overestimate the influence he had not only as a golfer but as an amputee with profile. Visible and not backing down,’ he said.

RIP Jack Newton.
His junior golf foundation was a pillar that tied many to the game of golf for life.
And on TV, you’d learn horrible shots into the scrub meant a visit to where elephants go to die.
Great character, great man.

The Storm released an official statement on Friday.

‘We are deeply saddened by the passing of Jack Newton OAM. Our thoughts and prayers are with former Storm premiership player Clint and the whole Newton family at this difficult time. Rest in peace Jack,’ the club Tweeted.

Few have had a greater impact on the development of junior golfers in Oz than Jack Newton – the JN foundation beginning in ’86. Not to mention the short game improvement of thousands with the Jack Newton Putting Partner, down the hallways of homes across the country. RIP Jack.

‘Great golfer, great commentator, great man and such a loveable larrikin and legend. Hugely influential in the early success of the Newcastle Knights,’ Rothfield said.

Voss added: ‘Rest in Peace Jack Newton. Loved his family, golf, footy and a beer. Admired by so many.’

Thinking of the Newton family this morning following the very sad passing of Jack Newton. The sport of golf owes Jack a lot for what he did for the game over many years. A remarkable man who will be missed by many. Rest In Peace Jack. @wwos @NewsTalk4BC

The Newton family released a statement thanking the community for their love and support following Jack’s passing.

‘Dad was a fearless competitor and iconic Australian, blazing a formidable trail during his professional golfing career between 1971 and 1983 before his career tragically ended following an accident involving an aeroplane propeller at the age of 33,’ the statement read.

‘He fought back from tremendous adversity as only he could, and chose to selflessly invest his time, energy and effort towards giving back to the community through his Jack Newton Junior Golf Foundation, sports commentary, golf course design, and raising significant funds for several charities, most notably, diabetes.

Sad to hear about Jack Newton. He was larger than life; a once-in-a generation character you just thought would outlive us all. Did so much for his family, community, golf, charity & loved his home town #Newy. Condolences to Jackie, Clint, Kristie & family. Rest In Peace, Jack.⛳️

‘His passion for sport and contributing to future generations of golfers and the Australian community demonstrates the character of our father, beloved husband, proud brother, adoring grandfather and maverick mate.

‘In true Jack Newton style, we will celebrate his incredible life; however, for now, our family asks for privacy and we appreciate everyone’s love, support and friendship throughout his life.’ 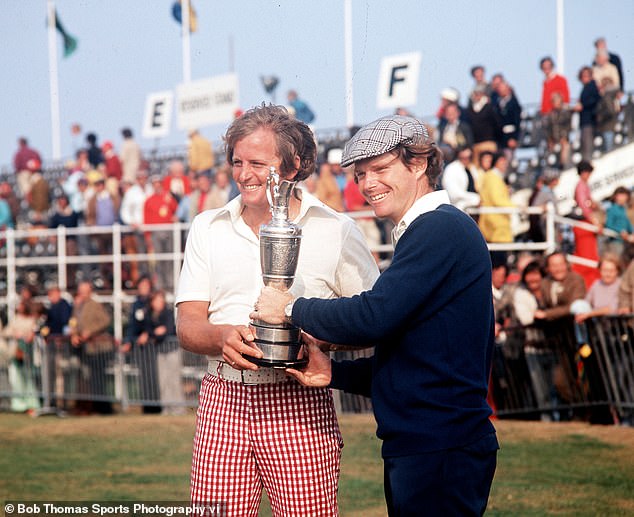 Australia’s Jack Newton [left] and USA’s Tom Watson are pictured with the Claret Jug trophy prior to a play-off after finishing tied in first place at the British Open Championship in 1975.