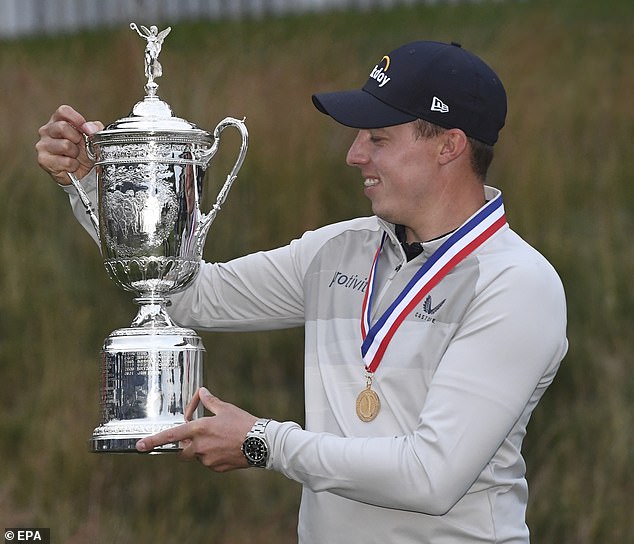 ‘That was one of the great iron shots under pressure I’ve ever seen’: Jack Nicklaus leads the praise for Matt Fitzpatrick’s incredible bunker shot on the final hole of the US Open – but new champion admits it was ‘hit and hope’!

Praise has come in for US Open champion Matt Fitzpatrick after his stunning bunker shot on the 18th hole proved crucial as he secured the title.

The Englishman needed par to win the championship, but had left himself with massive work to do after his towering hook off the 18th tee dropped into the massive bunker left of the fairway.

Under immense pressure, Fitzpatrick followed off with one of the shots of his life, before he two-putted for par to win on six under. 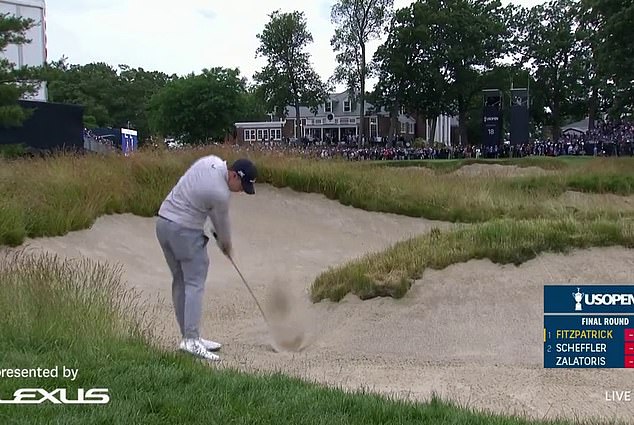 Under immense pressure to get par, his bunker shot set him up perfectly to win the US Open

Jack Nicklaus led the praise for Fitzpatrick as he took to social media after the 27-year-old secured victory.

He wrote: ‘That shot @MattFitz94 played out of the fairway bunker on 18 was one of the great iron shots under pressure I’ve ever seen.’

Nicklaus, a four-time winner at the US Open, added: ‘Couldn’t be happier for a really nice young man—a terrific young man! One of the great rounds of golf I have ever seen on final day of @usopengolf!

‘He had the pressure on him, having never won in the United States, and came through in flying colors!’ 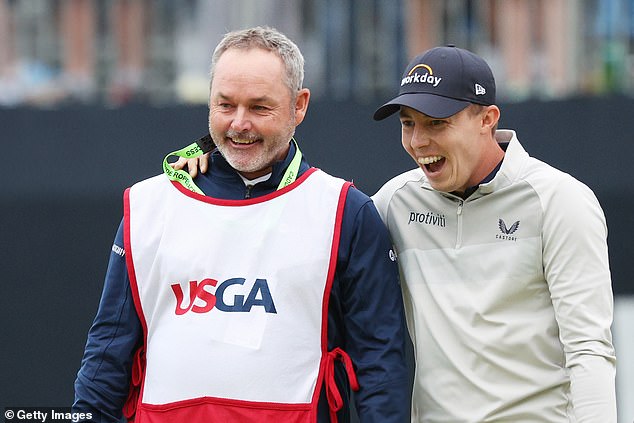 Brandel Chamblee meanwhile commented: ‘You will likely never see anyone in the final group of a U.S. Open hit 18 greens in regulation, so watching Fitzpatrick hit 17 greens (drove 5 & hit 8 in two) today, you may well have just seen the best final round performance from a ball striking perspective in US Open history.’

After securing the trophy, Fitzpatrick admitted that it was a ‘hit and hope’ shot.

He said: ‘It’s one of the best shots I ever hit, there’s no doubt about it.

‘I hit some unbelievable shots coming down the stretch. I look back to my three approaches into 15, 16, and 17 as all really, really good shots. On 18 it was kind of just a bit of hit and hope.

‘I just felt I had to hit the green. I was trying to make a par on 18 and put the pressure on him and force him to make a birdie.

‘I knew Will was going to hit it close. I knew he was going to give himself a chance. When I hit that shot, I thought at least I’ve got a chance too.’

His stunning shot helped him beat American Will Zalatoris, who finished on five under par to the title.

As reported by Golf.com, Zalatoris said: ‘That golf shot was one in twenty, at best. To pull it off in that situation is incredible.’

Two putts from Fitzpatrick meant Zalatoris had a 15ft-birdie putt to tie – which slipped agonisingly by the edge.

The US Open champion closed with a 68, while Zalatoris shot 69 and Scottie Scheffler got a 67 – as Fitzpatrick beat both Americans by one shot.

Fitzpatrick became just the third Englishman since 1924 to win this title, following Tony Jacklin in 1970 and Justin Rose in 2013.