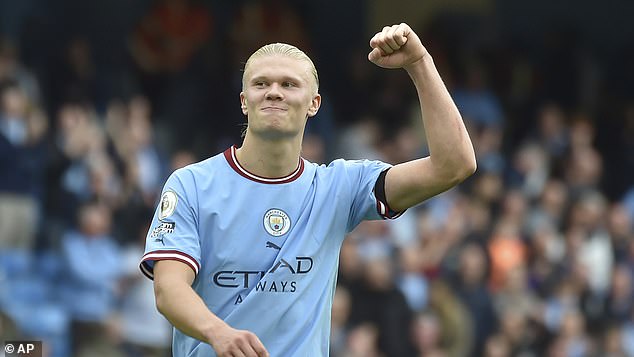 The Liverpool legend claimed that Haaland was a ‘world class’ player who is already living in defenders’ head rent free, while Sky colleague Gary Neville stated he had taken Manchester City ‘to a different level’.

Carragher said on SkySports’ coverage of Leicester City’s clash with Nottingham Forest on Monday: ‘It feels like anything is possible with Haaland. It is a derby and there aren’t many hat-tricks in this fixture.

‘It felt like a signing for the PL, he is everyone’s signing, not just City. We normally develop world class players, they don’t arrive here. We’ve got one now.

‘This Mbappe-Haaland debate will be the new Messi Ronaldo. He is top of the tree. We could be seeing something here we have never seen before in terms of numbers. The big thing that really stands out for me if the impact he has on defenders. 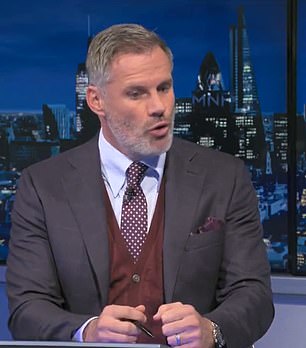 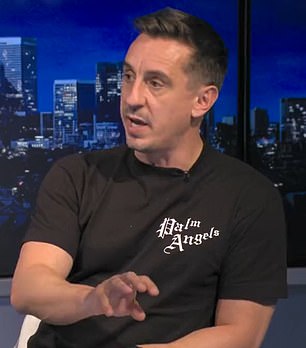 ‘Up and down the country they will go into training and talk about him, how to stop him. There is no doubt. Mentally he is already in heads and he was at the weekend.’

The former Borussia Dortmund frontman’s summer arrival was hailed as the final piece of the jigsaw for City to at last win the Champions League, but few were prepared for the onslaught of goals he has brought domestically.

Norway international striker Haaland has become the fastest player in the league’s history to reach 10, 11, 12, 13, and 14 goals after his latest heroics. 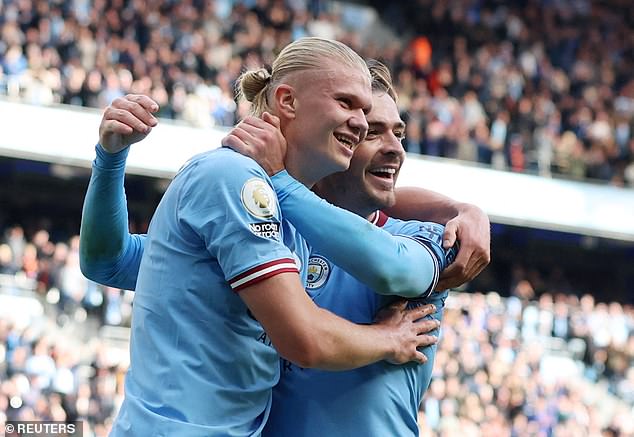 And Carragher was not alone in his praise of the striker, as Neville suggested his performances could see Pep Guardiola’s side run away with the title.

Neville added: ‘He has taken city to a different level in many different ways. I prefer Liverpool’s style of play, City can be repetitive but this season it is different.

‘They have an explosion on the pitch. It’s not just the rhythm, in the past they have beat teams unbelievably but yesterday was like wow. It is a absolute different level. There are very few players you must see live, that is how it feels with him.

‘He is an absolute joy, what I watched, it feels so definite and Pep Guardiola must be so revitalised. If they keep him fit, they could win the league by 15 points.’