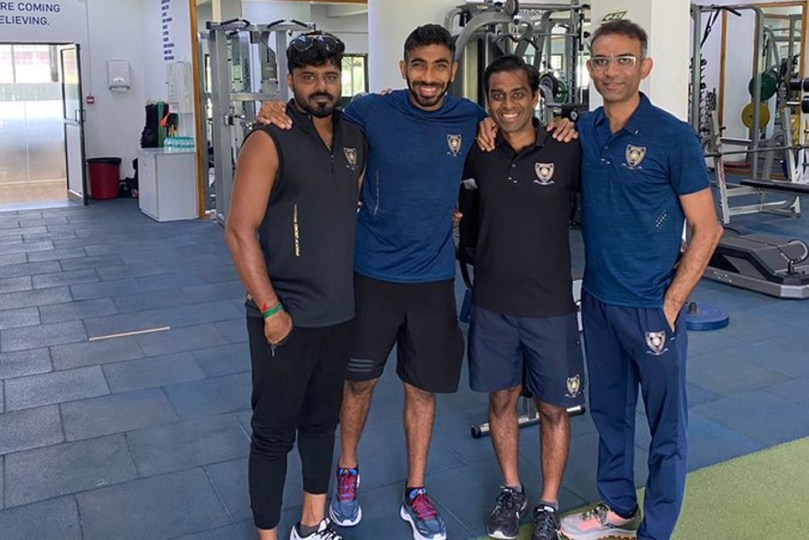 IND vs AUS T20: Jasprit Bumrah Recovery: Jasprit Bumrah is fit and raring to go in upcoming India vs Australia series. The three-match series marks the return of the pacer, who missed the Asia Cup due to back injury. He thanked the former Indian team physio Nitin Patel and others for helping him recover. It was because of them that the speedster could be picked for the T20 World Cup as well. Follow T20 World CUp live updates with InsideSport.IN

Also Read: IND vs AUS T20: Jasprit Bumrah RESTS all DOUBTS on his FITNESS, Watch VIDEO from National Cricket Academy where he is training full throttle for INDIA-Australia & T20 World CUP: Check OUT

He posted a photo with Patel and two other members of medical team at the NCA. The smile in the photo showed his mood. He captioned the pic, “Can’t thank these men enough for their hardwork, expertise and all the hours they’ve put in to help me get back to the game.”

Can’t thank these men enough for their hardwork, expertise and all the hours they’ve put in to help me get back to the game 🏏 pic.twitter.com/kq3kSTleWE

It is not only Bumrah, who is pleased with his recovery. The management must have also taken a huge sigh of relief.

Ever since his injury news broke out, there were fears if the player would be available for the World Cup. It was a recurring back problem, which was not a good piece of news. Following his injury early August, the Indian selectors were sweating about his injury.

The player spent long hours at the NCA and trained in order to get fit and recover on time. It was his injury, which also derailed India’s plan of announcing T20 World Cup squad. They had to wait for the final assessment about his injury from. It was not only Bumrah, even Harshal was at the NCA for treatment of his rib injury.

Only once they were declared fit to play in the ICC event, the BCCI selectors sat for a meeting and included both the players.

Though they have both been deemed fit, the India vs Australia series will be crucial. The three-match series starts on September 20. The management will be able to access their match-fitness, which will be important ahead of the World Cup. Following which, the three-match series against South Africa, starting later this month, can be used to get back to rhythm.