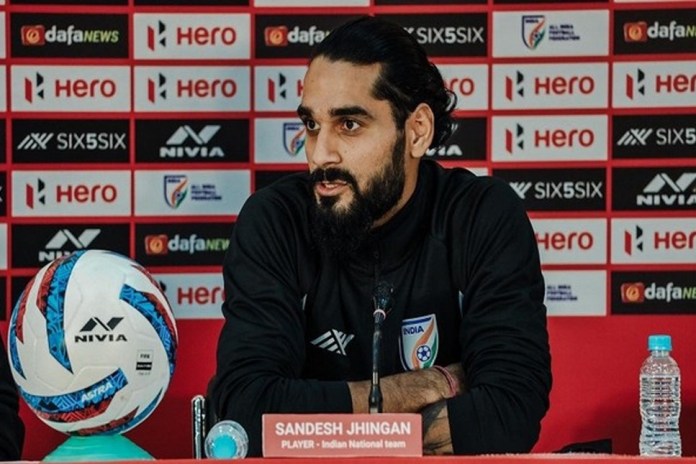 AFC Asian Cup Qualifiers: With an eye on the next three matches to secure a spot at the 2023 AFC Asian Cup, Indian National team defender Sandesh Jhingan believes India needs to be a regular in Asia’s showpiece football tournament, to achieve the ‘ultimate dream’ of playing in the FIFA World Cup. Follow InsideSport.IN For more updates

Speaking on the eve of India’s first match of their Group D third-round qualifier against Cambodia in Kolkata on Wednesday, Jhingan said, “Everyone wants to be at the World Cup, everyone football fan and player. To reach that level, we need to be regulars in the Asian Cup. I am not saying it is easy but it should mean without a doubt that India is always the Asian Cup. That is the first stepping stone to going toward the ultimate dream.”

India are chasing a fifth appearance in the Asian Cup finals tournament. The Blue Tigers aim to qualify for back-to-back Asian Cups for the first time ever. Previously, India have featured in the 1964, 1984, 2011, and 2019 editions.

Jhingan also heaped praise on ATK Mohun Bagan club-mate Liston Colaco, who is expected to carry his red-hot form in the AFC Cup in the Asian Cup qualifiers. “The youngsters are doing really well. Especially Liston. He deserves everything that he has got now. He has a very long way ahead and I am sure he will do well, he has that hunger in him. When you start to do well, the world around comes to you but he has kept that humbleness intact and has that desire to do well. There will be many players who will come so you need to keep working, that is the one thing which I really admire about Liston,” said Jhingan.

“Not only Liston, Roshan (Singh) had a fantastic season, Manvir (Singh) also I have seen him grow. A lot of young players dream big and work hard. It is a long road, you have got to keep learning. Same for me as well, I am 28 and I can’t say I have reached my peak yet. The idea is to improve all the time, do well for our clubs, contribute to the national team and help India reach greater heights so all our fans can be happy,” Jhingan said, assuring fans that his best is yet to come.

After the match against Cambodia, India face Afghanistan and Hong Kong in Group D. All matches will be played at the iconic Salt Lake Stadium in Kolkata. Jhingan is excited at the prospect of qualifying for the Asian Cup in front of home fans.

“Football is all about supporters and playing in front of passionate supporters is what we dreamt of when we were little boys, representing the national side in front of packed stadiums – it’s the stuff of dreams. The more the fans come, the merrier. It will give us a push and extra motivation. The significance of going to the Asian Cup is massive and to get it done on your home soil in Kolkata will be a privilege,” Jhingan remarked.

While India bowed out of the race to qualify for the 2022 FIFA World Cup in Qatar back in 2019, the national team aim to make it into the quadrennial global event in 2026, where the tournament will be expanded to 48 teams, featuring 8 from Asia.