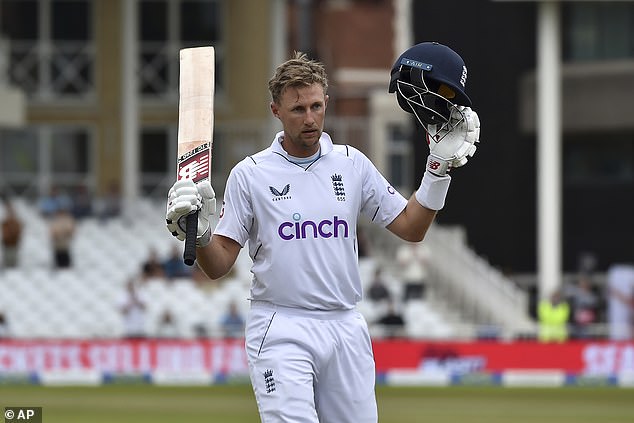 Joe Root was visibly frustrated after his magnificent innings came to an end on 176 in the morning session of the second Test against New Zealand at Trent Bridge.

Root departed 24 short of a double century having driven a Trent Boult slower ball straight into the hands of Tim Southee.

The 31-year-old, who is in the form of his life and recently passed the milestone of 10,000 Test runs, only added 13 to his overnight tally.

Having resumed on 163 not out, Root made an ominous start to the fourth day as he played an outrageous scoop shot off Southee that sailed over the boundary for six – a stroke described as ‘unbelievable’ and ‘outrageous’ by Michael Atherton and Simon Doull in commentary on Sky Sports.

Root was out shortly after, however, with England still 37 adrift of New Zealand’s first innings total of 553.

Given the match situation, and the pitch, Root was understandably disappointed not to kick on and reach a double century.

His superb knock was his fourth hundred in his last five Tests and the second since he resigned as captain.

Root hit a magnificent unbeaten 115 to guide England to victory in the first Test and threatened to give them a first innings lead before being deceived by Boult.

Ben Foakes moved to his half century in style as runs flowed in the morning session, with England seeking to surpass New Zealand to take a first innings lead.

England then lost the wicket of Stuart Broad thanks to a stunning catch from Daryl Mitchell before Foakes was run out by Henry Nicholls for 56 after a mix-up with Matthew Potts.