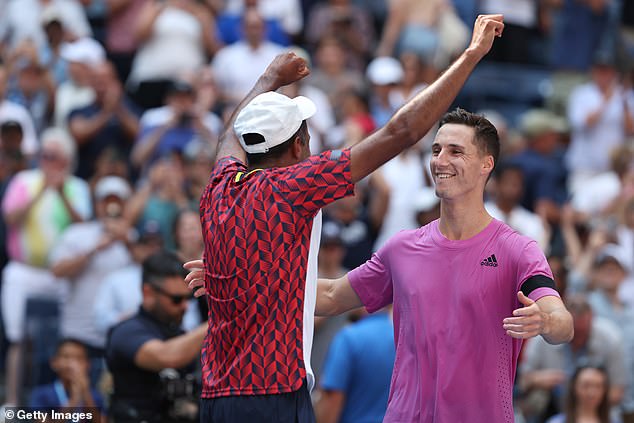 Joe Salisbury beats British rival Neal Skupski in the US Open doubles final in straight sets victory… just days before the duo reunite, this time on the same team, in the Davis Cup!

Joe Salisbury took his fifth Grand Slam title on Friday and the bragging rights over Davis Cup team-mate Neal Skupski when he successfully defended his US Open trophy.

And thrown into the bargain was the retention of Salisbury’s status as the world’s number one doubles player, which had been threatened by the 32 year-old from Liverpool.

The first match on before the men’s semi-finals, it was a close affair which was just shaded by the more established duo when Skupski had his serve broken as a second tiebreak loomed. Salisbury has now won three men’s doubles and two mixed at the Majors.

He and Skupski will be team-mates in the four-way group playoffs in Glasgow next week to determine two teams who will advance to late November’s Davis Cup finals.

The quartet on court will be reunited soon enough, with Ram playing in Scotland for the USA and Koolhof representing Holland in the round robin competition. Kazakhstan are the fourth team who will be present.

The event starts on Tuesday and is set to go ahead after lengthy discussions at the Lawn Tennis Association who, releasing the information in the middle of the King’s speech, said they had made the decision after careful consideration.

Skupski and his Dutch partner have had an outstanding season, to the extent that even before the final they had become the first pair to qualify for the year-end ATP Finals in Turin.

They have won six finals this year, more than any other pair, but lost last time out against the same opposition, at Indian Wells in the early Spring.

It was the Anglo-American pair who had the first chance when they forced a break point against the Skupski serve in the third game.

Other than that it was desperately close with few openings until the tiebreak, which saw Skupski and Koolhof move into a 4-1 lead.

That changed sharply when Koolhof dropped both points on his serve, and from there they completed a run of six straight points to seal it 7-4. A measure of how close it had been was that there was only one point’s difference between them after the 64-minute opener.

Ram faced two break points in the third game of the following set. On the first he drew an error but the second one saw Skupski middle a backhand return winner to go ahead for the first time.

That work was immediately undone in the next game when the Liverpudlian, starting with an ace, dropped the next four points in the face of rifled winners from both Ram and Salisbury.

The champions could have driven home the advantage in the next game when they created another break point, which the Dutchman saved with a volley.

Amid a sea of defensive volleys it continued to be close until the break point at the end.

Last night’s semi-finals were due to feature Casper Ruud against Karen Khachanov, followed by Carlos Alcaraz against America’s Frances Tiafoe.