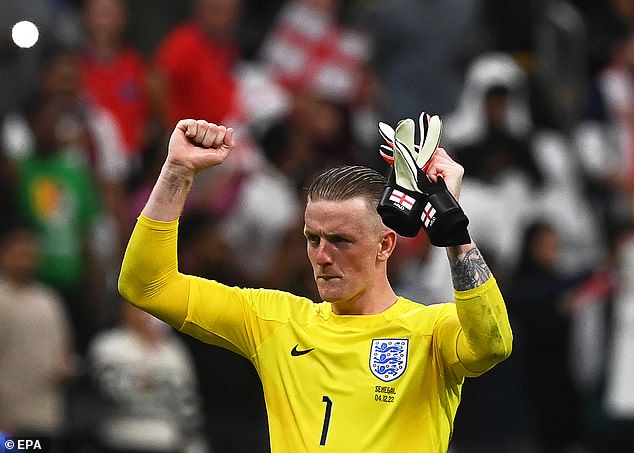 Them’s the breaks, so they say. It’s a little phrase that will be in the mind this weekend when Jordan Pickford takes his place once more in England’s goal.

Everton’s number one is about to join an exclusive club, the latest player to reach 50 England caps. Occasionally these milestones creep up on individuals but Pickford, from many weeks ago, had worked out that December 10 in Al Khor would be important.

He anticipated it would be a showdown with Kylian Mbappe and Company and, on arrival here in Qatar, wouldn’t consider the idea that England wouldn’t reach the quarter-finals. He’s a lively character, full of optimism and enthusiasm, and this occasion will hold no fears whatsoever.

Gareth Southgate, when he was involved with England’s development squad, always knew Pickford would go on to play at the highest level. He gave him his Under-21 debut against the United States in September 2015 and, fittingly, did the same at senior level against Germany in November 2017.

Would he have reached 50 caps by now, though, if Jack Butland hadn’t broken his finger? Southgate was considering using the then Stoke keeper in that fixture at Wembley, having worked closely with him between 2013 and 2015 with the Under-21s.

Butland, at that point, had greater Premier League experience than Pickford and Southgate, who was looking at options to challenge Joe Hart, liked his commanding presence. What might have happened had he avoid a calamity at St George’s Park that left him in a splint?

When the opportunity presented itself to Pickford, though, he was ready to barge through the door. It was five months after he had joined Everton for £30million and there would be no looking back – a clean sheet against the reigning world champions was the perfect starting point. 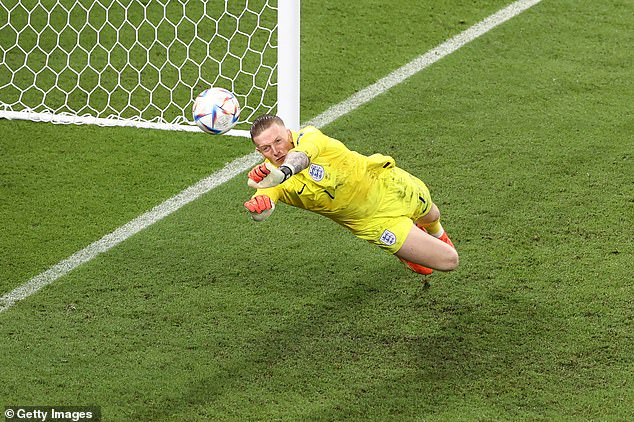 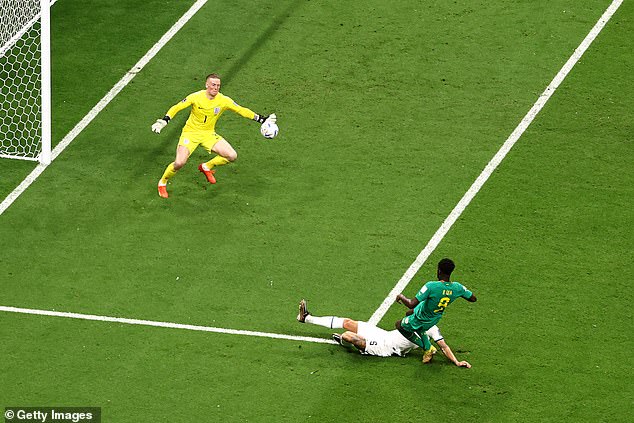 There have been debates about Pickford’s suitability for this position of England number one ahead of every tournament to which he has been but, to see him in action in Qatar, the quality of his performances with Three Lions on his chest have essentially been faultless.

‘He’s been absolutely top class for England,’ Kyle Walker, who has been in front of Pickford for 34 of those 49 appearances, enthused. ‘I’ve spent a lot of time with him outside of the training field. We get on well. I’ve got nothing but praise to say for Jordan. Congratulations on getting your 50th cap!

‘Hopefully he can put in the performances he has been putting in for years. To move Joe Hart off the pedestal was a big statement for him to say: “Here I am on the international scene!” and he’s not let us down. He’s been fantastic and let’s hope that he can continue for many years to come.’ Why shouldn’t he? To see Pickford at work during sessions at Al Wakrah enables you to gather a candid insight into the way the goalkeepers train under the vastly-experienced coach Martyn Margetson and the demands that are put on them, away from the outfield players.

Each day they come out 15 minutes ahead of the main group and the drill to warm him up consists of Margetson, Nick Pope and Aaron Ramsdale volleying a flurry balls out of their hands at him from close range, from a variety of different angles.

Pickford starts with his back turned, then spins into action. Once he has been worked, Pope and Ramsdale repeat the drill.

Yesterday, Pickford had a run of facing 40 such shots and caught every single one. It was as if he had Velcro on his palms and the ball was actually made of cushion but, really, it was showing his speed, strength and the standard of his reflexes. 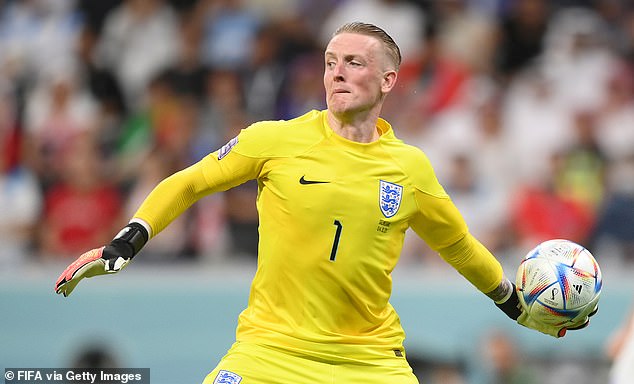 Giving Pickford the gloves in November 2017 was one of Southgate’s most important decisions; time has also proven it to be one of his best

Pickford has been in the zone here and that point was particularly proven last Sunday when he made a quite brilliant save to deny Boulaye Dia, the Senegal striker, with the game delicately poised at 0-0 in the first half. He was quick on the scene and stuck out a big, strong arm to turn the shot away.

‘People don’t see behind the scenes,’ Alan Kelly, Everton’s goalkeeper coach, told Sportsmail recently. ‘There is pressure on his shoulders but he just puts the work in and that’s the best way to deal with it. Believe me, his preparation give him the best chance to perform at a top level.’ Though he had a short period of time out earlier in the season when damaging his thigh, the result of his powerful kicking, there was never any chance of him missing the World Cup and it really shouldn’t go underestimated how critical he is to England’s hopes of success.

What also shouldn’t be overseen is what he might achieve in the future.

Only six men have played more games in goal for England – Peter Shilton (125) might be impossible to pass but David Seaman and Hart (75), the late, greats Gordon Banks (73) and Ray Clemence (61) and David James (53) are all within reach.

Giving Pickford the gloves in November 2017 was one of Southgate’s most important decisions; time has also proven it to be one of his best.