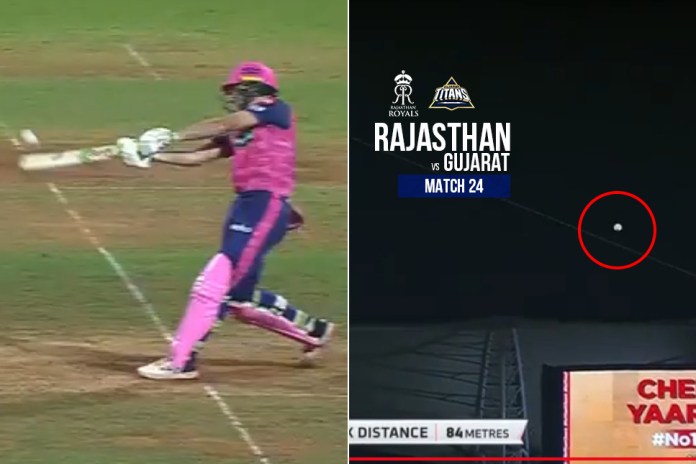 IPL 2022 Fastest SIX: Jos Buttler stunned one and all by hitting one of the fastest sixes in IPL with the ball disappearing into the stands within blink of an eye. The English opener hit the terrific shot off Gujarat Titans pacer Yash Dayal on Wednesday. Follow InsideSport.IN for more updates.

Left-arm pacer Yash Dayal, who is making his IPL debut, got off to a blazing start by picking the wicket of Devdutt Padikkal in his very first over. However, he was smashed to all corners by Buttler in his second over.

Bowling the fourth over of the innings, the debutant gave away two boundaries in his first three balls. On the fourth ball, he bowled a short ball which was pulled away by Buttler over deep-midwicket fence within no time. Leaving the commentators, spectators as well as the opposition stunned with his rampage.

“What a great eye, what hand-eye co-ordination, what speed of hands we are seeing here,” said Sunil Gavaskar while commentating on air after the terrific shot. At that point in time, Buttler had scored 44 runs off just 18 balls.

However he lost his wicket after scoring 54 runs off 24 balls, as a Lockie Ferguson delivery crashed his stumps.