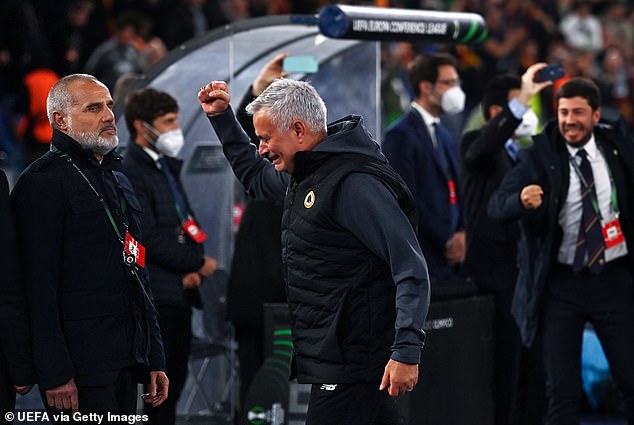 Jose Mourinho bursts into TEARS after guiding Roma to their first European final for 31 years by beating Leicester in Europa Conference League semi, before dedicating win to fans: ‘My emotion was for them’

By Tom Collomosse At The Stadio Olimpico

Jose Mourinho shed a tear at full-time after leading Roma to their first European Final for 31 years.

Tammy Abraham’s early goal was enough to end Leicester’s dream of becoming the original winners of the Europa Conference League and means the decider in Tirana, Albania, will be between Roma and Feyenoord.

‘Why did I shed a tear? Because I feel what they all feel,’ he said. ‘It’s a giant club without a trophy room for the social importance of this club.

You can see what this means to José. He will do anything to bring this city, this club, to glory. And lets be honest, it’s a message to the world that he is still the special one.pic.twitter.com/3ILYrDBNvt

‘I know what it means to these people and my emotion was for them. I’ve been lucky enough to be in more prestigious finals but this made me feel very special.

‘We have a sense of family. With age you become less selfish and more of a father or even a grandfather to some of them, I’m very happy for all of them. Rome is a red and yellow city, we’ll see the joy over the coming days. I’ve made a small contribution to that.’ 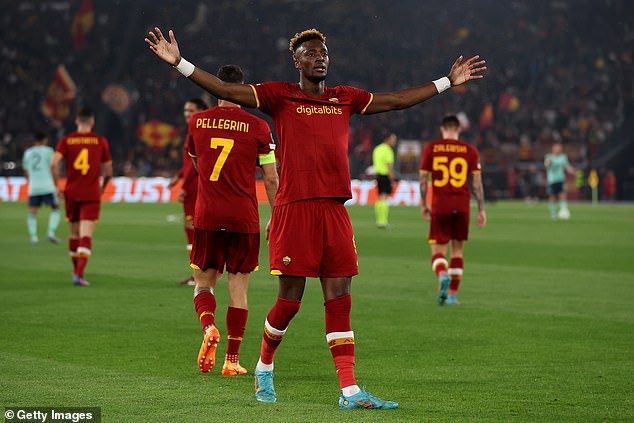 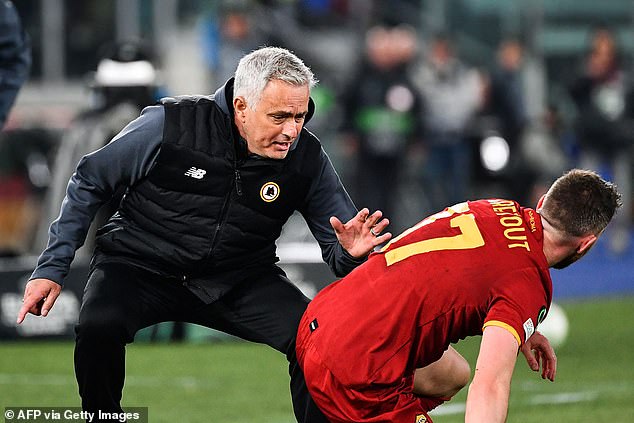 Mourinho said: ‘I know what it means to these people and my emotion was for them’

After a 1-1 draw in the first leg at King Power Stadium, Abraham headed in Lorenzo Pellegrini’s free-kick in the 11th minute after taking advantage yet again of Leicester’s weakness at set pieces. The forward, who is 6ft 3ins, had no problem climbing above 5ft 9ins Ricardo Pereira.

Leicester boss Brendan Rodgers said: ‘Our Achilles heel all season has been set pieces and it undid us again tonight. They are about organisation and determination and we lack physicality in those moments.

‘They had five players who were big threats from set pieces so there was always going to be a mismatch somewhere and it came to Ricardo Pereira marking Tammy.’