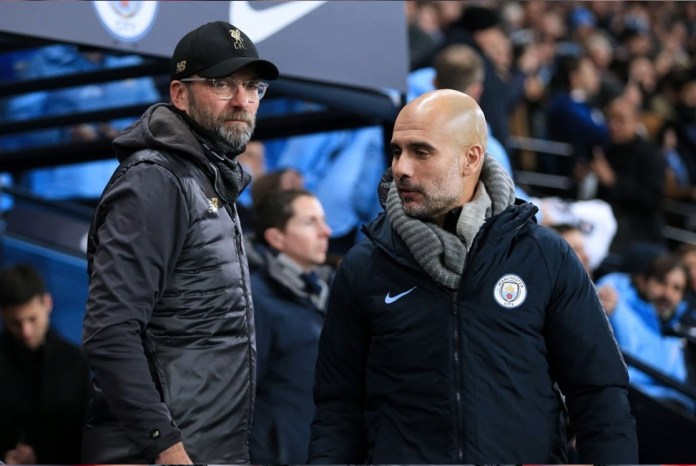 Second placed Liverpool are one point behind leaders City with eight games left for both teams. A win for Liverpool would put them in pole position to lift the Premier League trophy for a second time in three seasons. But a Liverpool defeat or even a draw would leave reigning champions City as the favourites to retain the title.

That would be a bitter blow for Liverpool, given their superb form of late, but it would not be the first time they were unable to catch City despite playing at the peak of their powers.
In 2018-19, City pipped Liverpool to the title by a point despite the Reds’ record points haul for the runners-up.

Klopp knows City are by far the toughest opponent his team will face as they chase an unprecedented quadruple. “There is no game in world football you can compare to play against City because they are good in pretty much all areas. There are no real weaknesses,” Klopp told reporters on Friday.

“You have to show the respect they deserve, especially against City as they are pretty good with the ball.”We know it is tough. What’s changed this last four years is everyone else thinks it is tough when they face us, and that’s really good.

“Nothing to worry about the mentality of my boys. After the (Benfica) game immediately the boys were clear ‘Now it’s City time’. We will be prepared.”City have won the title three times since Guardiola arrived in 2016, yet there are still some who question the Spaniard for his failure to win the Champions League since 2011, when he was in charge at Barcelona.

Klopp has no such doubts about Guardiola’s qualities however. “Pep is the best coach in the world. I think we would all agree on that and it might be a coincidence that it didn’t work out in the Champions League so far,” he said.
“If anybody doubts him, I have no idea how that could happen.”
Klopp believes City’s consistent quality in the Guardiola era has forced Liverpool raise their own standards. “We pushed each other to incredible points tallies. Madness. I would have never thought these kind of things were possible, especially not in this league,” he said.

“The consistency both teams showed in that period was absolutely crazy.” Liverpool have won 10 successive Premier League matches and have one foot in the Champions League semi-finals after Tuesday’s 3-1 win against Benfica in the quarter-final first leg.

That was the ideal preparation for the seismic showdown with City, who also face Liverpool in the FA Cup semi-finals at Wembley on April 16. Sunday’s game is being billed as a title decider but Klopp insists the race will be far from over whatever the outcome.

“I can’t decide what people think. But if you go through the possible results: if we win we are two points ahead and if everyone thinks that’s done and dusted with the league then I cannot help,” he said. “If we lose we are four points behind. And if anyone thinks ‘That’s it’ then I cannot change it but I know no-one from a City point of view would think like that.” Follow Man City vs Liverpool updates on insidesport.in