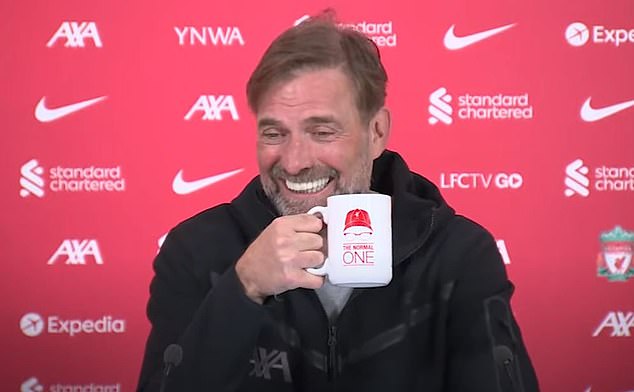 Jurgen Klopp admits he’d feel ‘extra motivation’ if he was Steven Gerrard ahead of Aston Villa’s clash with Man City… but insists he has NOT called the Liverpool hero before Sunday’s match because ‘the rest of the club did it already!’

Jurgen Klopp expects Steven Gerrard’s history with Liverpool to make him even more determined to give his former club a helping hand tomorrow.

If Gerrard’s Aston Villa take points from Manchester City, and Liverpool beat Wolves, the Premier League crown will go to Anfield and complete the third leg of their quadruple attempt.

‘I can understand these situations by imagining myself in that role,’ said Liverpool manager Klopp. ‘ 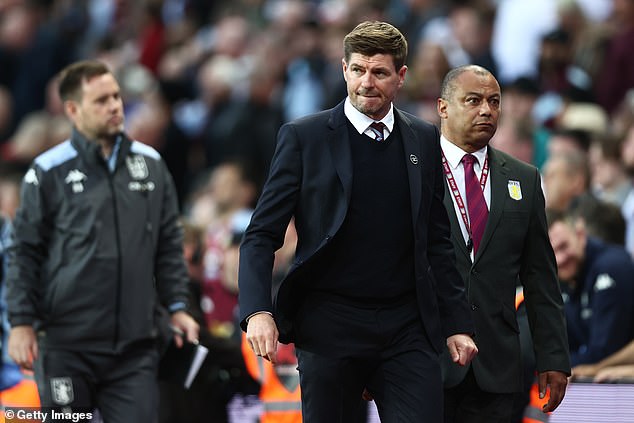 ‘If I was doing a game where I could help Borussia Dortmund or Mainz, it would mean extra motivation for me.

‘But I don’t play and Stevie doesn’t play — it’s much more of a shame that Stevie’s not playing than I’m not playing!

‘We are all human, Stevie will take it 100 per cent seriously I’m sure without me calling him. I don’t have to — probably the rest of the club did it already!’

Gerrard admitted his phone has been ‘busy’ this week and hopes Villa can exploit the pressure on City, who will end the season empty-handed if they do not win the league.

Gerrard never achieved a title triumph at Anfield and though he says it would be ‘fantastic’ if Liverpool pipped City, he is frustrated at suggestions that it will give him extra motivation. 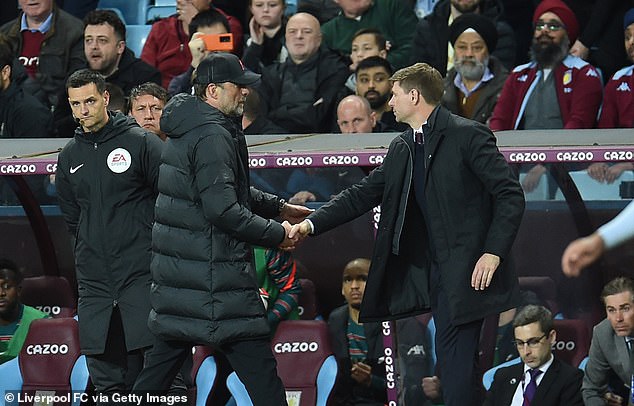 ‘I totally understand the external noise and the questions,’ he said. ‘They’re involved in a title race and I spent a lot of time there.

‘It is disappointing when people mention integrity and aim it towards me or any of my players. We’ll go out and give it everything to get points for Aston Villa and our supporters.

‘If that inevitably helps Liverpool, fantastic. But my priority is to try to get points for Aston Villa. City have world-class players and a top manager, but there is a lot of pressure.

‘If we manage to get something, we should enjoy that. If we can improve our position of 14th, I’ll be extremely happy.’ 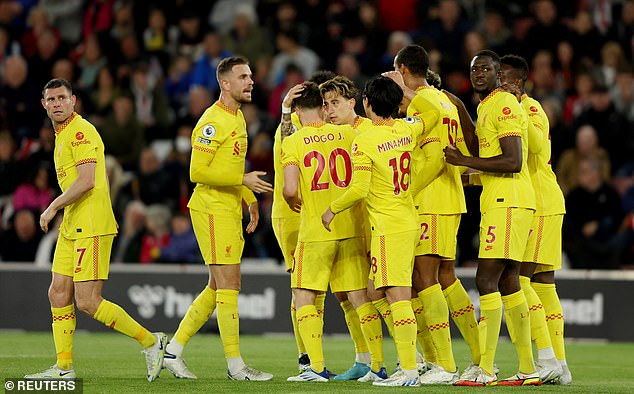 Klopp added: ‘An example of how motivated teams are to fill their perspective is Everton against Palace.

‘Wow. One of the most important games for Everton in their history and Palace turned up and played incredible football.

‘Yes they lost, the effort they put in, the passion they showed and the whole game was really good.

‘They lost, congratulations Everton by the way for staying in the league but that’s a good example of how football teams are. You play to win.

‘This is the game I’m not concerned about (City v Villa), or thinking about at all. Wolves will do exactly the same (as Palace), they come here and want to win and we have to be ready for this game and not the other one.’