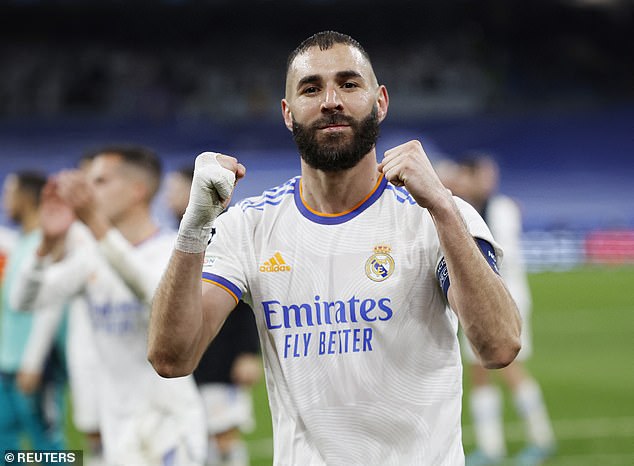 Karim Benzema sent Real Madrid through to the quarter finals of the Champions League with a stunning hat-trick against Paris Saint-Germain.

Los Blancos looked like they were heading out of Europe after Kylian Mbappe’s first-half goal gave PSG a 2-0 aggregate lead.

But then in a stunning 18-minute period during the second-half, Real Madrid and Benzema turned the game on its head.

The Frenchman levelled the score on the night after 61 minutes when he capitalised on a howler from PSG keeper Gianluigi Donnarumma.

He then levelled the aggregate scoreline when Luka Modric broke through the lines, before linking up with Vinicius and finding Benzema to smash home.

Then PSG gave the ball away from kick-off and Marquinhos accidently passed the ball straight into the path of Benzema to tuck away.

It was a horrific collapse from Mauricio Pochettino’s side, and Real Madrid fans were sent into raptures thanks to the brilliant performance of Benzema.

After the match Benzema received praise on social media after his match-winning display.

Match of the Day presenter Gary Lineker posted: ‘Karim Benzema is indisputably one of the greatest number nines of all-time.’

His former team-mate Mesut Ozil commented: ‘What a game… my boi Benzi still the best No9.’

Another user posted: ‘Karim Benzema deserves all the respect he gets. Man’s been carrying this #RealMadrid team since Cristiano Ronaldo’s departure. What a Performance!’