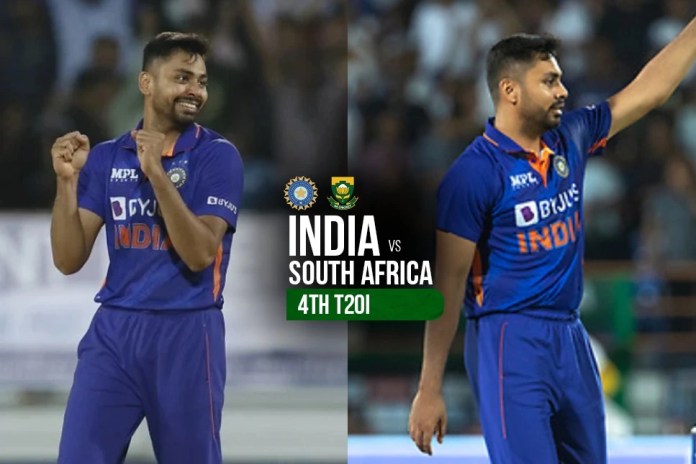 Almost 16 years after he made his T20I debut, Dinesh Karthik scored his maiden half-century in this format in Rajkot on Friday.

It was because of his innings and Avesh Khan’s four-wicket haul that India levelled the series 2-2. Elated Karthik & Avesh thanked coach for his contribution

“I’m very secure in this set-up. In the last game, things didn’t go well but I felt safe after going back to the dressing room. I am thinking a bit better and am able to assess situations better,” Karthik said.

Coach Rahul Dravid – Indian Dressing Room ‘SECURE & HEALTHY environment: Changing the team after two back to back losses was perhaps the easier option in front of Indian coach. But instead, he stuck to his guns and played an unchanged eleven over four matches.

Avesh Khan especially was under pressure before 4th T20. With figures of 0/35, 0/17 and 0/35 in the first three T20 – talks of Avesh being replaced by Arshdeep Singh was dominating headlines. Dravid instead decided to stick with same XI and results is in front of everyone.

“The team hasn’t changed over four games, so credit to Rahul (Dravid) sir.

He gives chances to everybody and intends to give them a long enough run. He doesn’t drop a player after one or two bad performances because you cannot judge a player on the basis of one or two games. Everyone is getting enough matches to prove themselves,” Avesh said.

“Yes, there was pressure on me. I had zero wickets in three games but Rahul sir and the team management gave me another opportunity today and I ended up picking four wickets. It’s also my papa’s birthday, so it’s a gift for him too.”

Bengaluru 5th T20 LIVE: India to take on South Africa in Bengaluru on Sunday in Series deciding match. And Karthik is confident that with so much positivity floating around, result will be positive in Bengaluru.

“The series is on the line, which is great. Rahul Dravid has focused on what batters and bowlers need to do and not the results. The dressing room is secure and feels fuzzy which is good. That clarity and environment has helped.” Karthik said.

“We expect positive result in Bengaluru”