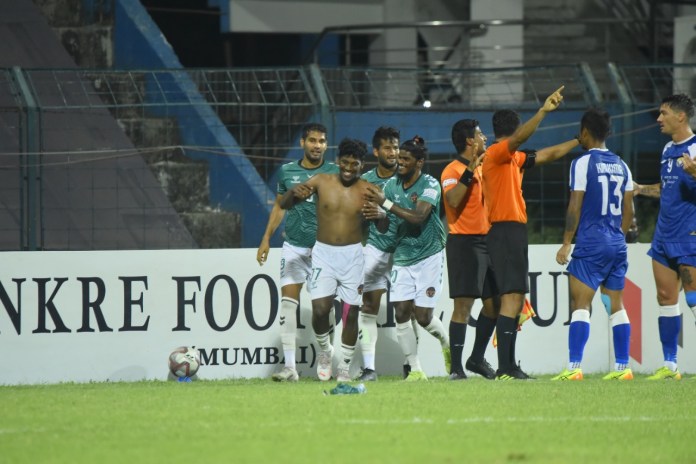 It was a must-win match for the side from Mumbai and this marks Kenkre’s third victory in four games as they continue their battle for survival in the I-League. The survival battle between the two relegation-threatened clubs began with Kenkre dominating the proceedings with some deft passes in an attempt to keep their opponents at bay. Zacharie Mbenda attempted the first shot of the match as early as the third minute from outside the box. However, it went wide.

The first significant chance of the match fell to Real Kashmir as they came close in the eighth minute when an unmarked Kshetrimayum Malemnganba Meitei dashed towards the opponent’s box with the ball. However, he took too long to take his host, and by then Mbenda had already caught him and was vying with him for the ball. Malem Meitei did try his luck, though, but his shot was a long way from the goal post. 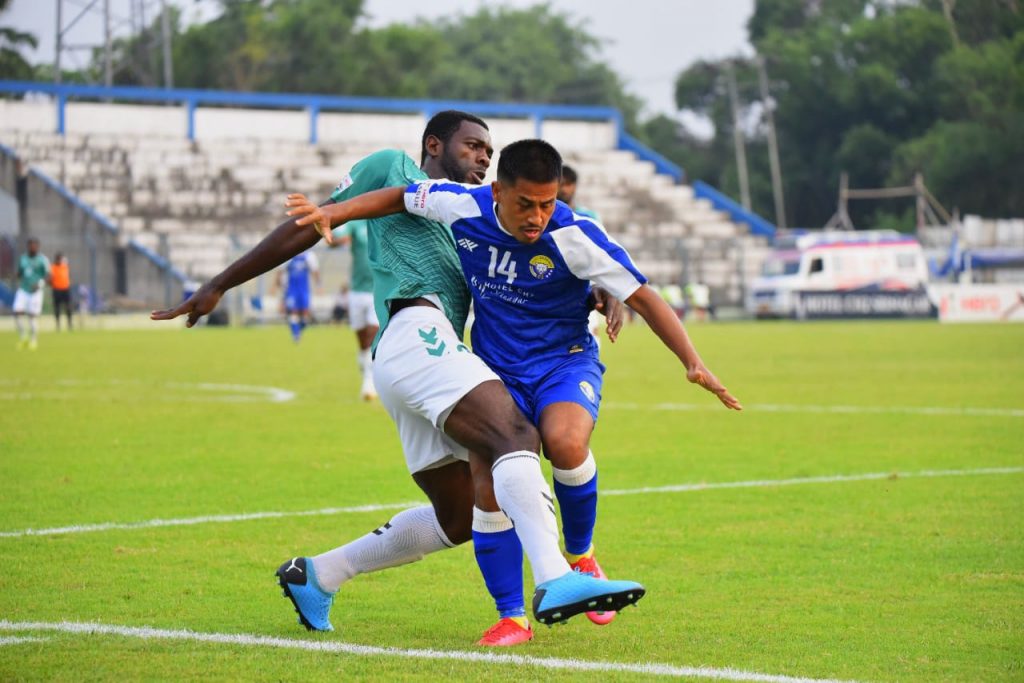 Kenkre were awarded a free kick in the 14th minute. However, it did not materialize into anything as there was not enough power in Aravindraj Rajan’s shot. Despite the fact that Kenkre dominated the game for the first 15 minutes, Real Kashmir had more attempts during that time.

The first substitution of the game came in the 16th minute when Kenkre were forced to replace Ranjeet Singh Pandre with Yash Mhatre due to an injury. During the first quarter, Malem Meitei was the standout performer for the Kashmir-based team, as he generated multiple opportunities and was the most active player on the field.

In the 25th minute, Kenkre won another free-kick from a long distance, and this time Vijay Nagappan took the shot and nearly struck the back of the net. It was, however, cleared in time by the Real Kashmir FC defence. Real Kashmir defender Prakash Sarkar was the first player to get booked as he received a yellow card in the 34th minute.

Akeraj Martins took a shot in the 35th minute from distance in an attempt put his team ahead but his shot flew above the bar. In the first half, Kenkre’s best chance came from a corner in the 37th minute. Vijay Nagappan took the corner and found Pravitto Raju in the box with a good pass. Despite being unmarked, the midfielder was unable to put the ball into the back of the net from just outside the 6-yard box.

As the first half drew to a close, both Real Kashmir and Kenkre stepped up their efforts, but neither side was able to break the deadlock, and both teams headed into the halftime break goalless.

In the 46th minute, Bikramjit Singh tried the first shot of the second half, but he was unable to find the back of the net. Martins took a shot from just outside the box four minutes later, but it went wide. In the 55th minute, Martins and Suraj Jeet Singh Negi teamed to produce another chance for their team, but Arvind was unable to convert it, and Kenkre squandered yet another excellent opportunity to take the lead. Mhatre almost got his first goal in the 60th minute but he was stopped by Bilal Khan.

Vijay attempted a beautiful effort from within the box in the 63rd minute after being set up by Aniket Panchal, but his shot hit the crossbar. In the 66th minute, Real Kashmir made its first replacement, with midfielder Meitei leaving the pitch to make room for striker Tiago Adan Fonseca. In the 69th minute, Kouassi Bernard Yao hit the post with a fantastic attempt, but he was denied.

Aravindraj Rajan finally broke the deadlock in the 78th minute. Vijay Nagappan swung in a corner and it was half-cleared by Bilal Khan’s punch. Substitute Khongsit took a shot from the half-cleared chance but it was not cleanly struck. Fortunately, it fell kindly for Aravindraj Rajan who nodded the ball home from close range and gave Kenkre the goal they so desperately needed.

In the 90th minute, all hell broke loose. A ball was floated into the box and just when Tiago Adan was about to meet it, Tenzin came off his line to punch the ball away but missed and caught Tiago. The shouts for a penalty were denied by the referee and to make matters worse, Real Kashmir FC were reduced to ten men after Ponif Vaz was sent off in the 90th minute for dissent.

Seven minutes were added at the end of regulation time but it was not enough as Kenkre managed to hold on. This means that the battle to survive in the Hero I-League will go to the final day of the Relegation Stage, with Real Kashmir FC and TRAU FC, who will be facing Aizawl FC later in the day, both involved in the fight to stay afloat in the prestigious competition.