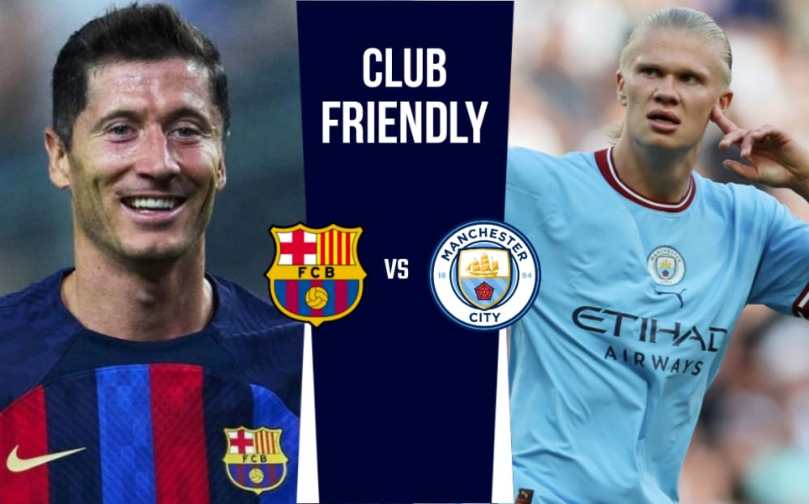 Robert Lewandowski scored one minute into their match versus Real Sociedad, the fastest goal scored by a Barcelona player since Andres Iniesta tallied 43 seconds into one of their games back in 2009.

The 2021 Ballon d’Or winner had a brace on Sunday, while Ousmane Dembele and Ansu Fati each picked up their first of the campaign, with the Barca number 10 also adding two assists.

We saw a few new faces to the Barcelona starting 11 this weekend as Frenkie de Jong replaced the suspended Sergio Busquets in midfield, while former Man City forward Ferran Torres began in an attacking midfield role, as he and Alejandro Balde replaced Raphinha and Jordi Alba.

Erling Haaland became the third player in Premier League history to score in each of his first two EPL away games, notching his third of the season for the Sky Blues this weekend, Kevin De Bruyne picked up his third assist of the campaign, while Bernardo Silva, who has been rumoured for weeks to be on the move to Barca, had a goal and an assist.

Rodri and Joao Cancelo are first and second in the league regarding passes, Ederson has two clean sheets and Phil Foden became the youngest player to make 100 top-flight appearances under manager Pep Guardiola when he started on Sunday against Newcastle.

Ruben Dias replaced Nathan Ake after the Dutchman sustained an early injury against the Magpies, and John Stones made his first appearance of the season on Sunday.

Bernardo Silva started in place of Riyad Mahrez, Aymeric Laporte has an ACL injury and new signing Sergio Gomez was on the substitutes bench.

Barcelona vs Man City Friendly LIVE: When, where and how to watch Club Friendly Live Streaming in India?

When will Barcelona vs Man City be played? – Date

What time will Barcelona vs Man City be played? Time
BAR vs MCI match will kick-off at 1:00 AM, IST

Where will Barcelona vs Man City be played? – Venue
BAR vs MCI will be played at Spotify Camp Nou Stadium

Barcelona vs Manchester City, Where to watch Live Streaming & Live Telecast in India?

For fans in India, the match between Barcelona vs Man City, won’t be live telecasted or live streamed on any major Indian digital platform but CITY+ & BARCA TV+ will be live streaming the match on subscription basis. The fans can also follow the action and match buzz through the team’s social media accounts.