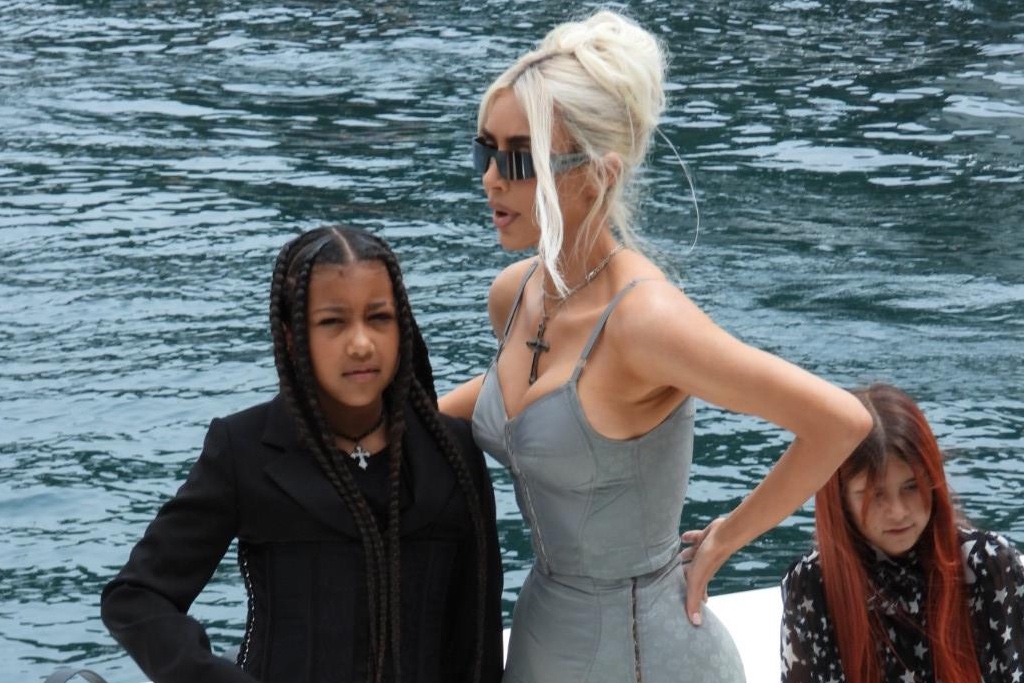 Kim Kardashian took her sleek signature style to Italy for Kourtney Kardashian and Travis Barker’s wedding — and, while doing so, proved that it can even be worn while on open waters.

The “Kardashians” star left Portofino with her family, including daughter North West, for more celebrations on Sunday. While doing so, Kardashian wore a sleek gray tank top with thin straps, bustier detailing and a structured bodice. The set was paired with matching high-waisted pants, all covered in a faintly silky floral print. With a large cross pendant necklace and sleek wraparound sunglasses, Kardashian looked straight from the ’90s — in fact, with her bleached blond updo, she was instantly channeling Pamela Anderson’s style from that very era.

North was similarly edgily dressed, wearing an all-black outfit with a choker that featured a cross-shaped pendant.

When it came to shoes, the KKW Beauty founder went transparent in a set of pointed heels. While the style wasn’t fully visible, the pair appeared to include sheer pale gray uppers with triangular toes. It’s likely they also featured thin heels totaling 3-4 inches in height, based on the style’s classic silhouette. The pair allowed Kardashian’s matching set to take center stage, while still emphasizing her outfit’s cool neutral tones.

Heels like Kardashian’s are a versatile year-round wardrobe staple. The pair’s longevity comes from its sharp silhouette, as well as sleek thin heels. Most pairs feature stiletto heels, like new styles by Miu Miu, Gianvito Rossi and Jennifer Chamandi. In addition to the businesswoman, stars like Rihanna, Chiara Ferragni and Hailey Bieber have worn pointed heels by Prada, The Attico and Saint Laurent in recent weeks.

The former “Keeping Up With the Kardashians” star is known for wearing bold outfits, such as see-through leggings and mesh dresses. These are often styled with pieces in coordinating hues from top brands including Balmain, Maison Margiela and Mugler. Her shoes are often trend-based and daring, ranging from sleek Balenciaga boot pants to Yeezy sneakers. She’s also been seen in vintage sandals, boots and pumps from Prada, Manolo Blahnik and others over the years.

Click through the gallery for more of Kardashian’s boldest looks over the years.