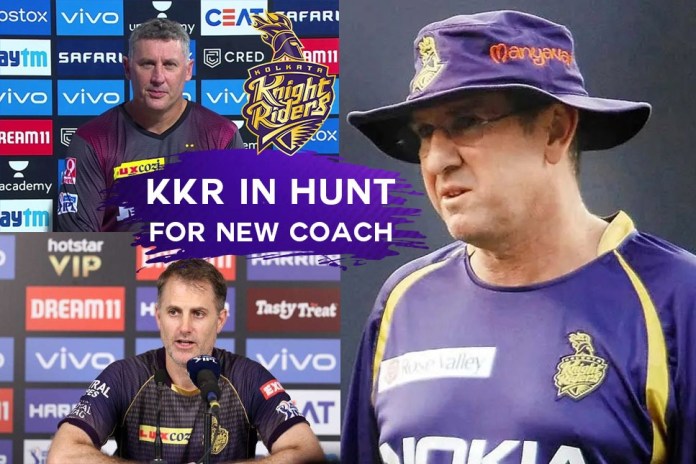 IPL 2022: KKR in hunt for NEW COACH – Now that the IPL 2022 campaign is all over for Kolkata Knight Riders and they have been eliminated from the playoffs race, the management has started planning for the next season. KKR will need to strengthen many areas for IPL 2023, but most importantly, they will first need to find a new coach. Follow IPL 2022 live updates on InsideSport.IN.

KKR head coach Brendon McCullum is leaving the team after being appointed as the new Test coach of the England team. Hence, the KKR think tank has started sorting through profiles to find the perfect candidate, and we have a few frontrunners already.

Leading candidates for the role of KKR’s head coach

The first name on this list is David Hussey. The Aussie former cricketer is now a part of KKR’s team as the chief mentor, and his promotion to the head coach role will make sense. However, if KKR does walk a different route, they can hire one of their previous coaches.

Simon Katich was a part of the KKR coaching set-up before McCullum joined. Given that he does not have any active roles currently after quitting his job at Sunrisers Hyderabad prior to this season, he could become the new KKR head coach.

Alternatively, the two-time champions can also return to the most successful coach in their history – Trevor Bayliss. However, though Bayliss is not associated with any IPL team now, he is coaching teams in the Big Bash League and The Hundred. Accordingly, it might be a difficult job for the KKR management to convince Bayliss to return to IPL. Meanwhile, though a date of appointment has not been finalized yet, it is expected that the Knights will try to get a new coach on board as soon as they can.

While the hunt for his successor has already begun, Brendon McCullum’s farewell left everyone in the KKR camp emotional. Speaking on McCullum’s influence, KKR skipper Shreyas Iyer said “I have not seen any coach being so calm and composed sitting in the dressing-room and dugout during the matches. There is a lot to learn from him.”

Besides Iyer, West Indian all-rounders Andre Russell and Sunil Narine also heaped praises on the former Kiwi wicketkeeper-batter. “He is the type of coach who allowed me to play the way I play and to be free. Whenever I talk to him, I hear freedom,” said Russell.

On the other hand, Narine claimed “It started a while when I just started at KKR as a player and I played under him as a captain and as coach. He is a wonderful human being, he looks out for his players and always seeks their interest.”