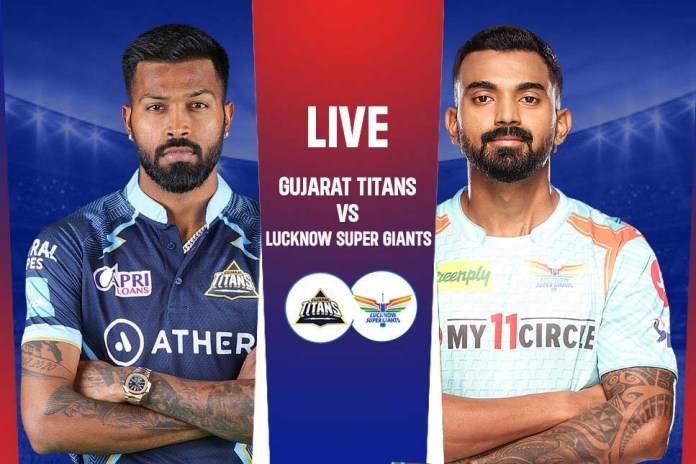 LSG vs GT LIVE score: IPL 2022 live updates- In one of the most anticipated battles of IPL 2022, KL Rahul & Co will face off Hardik Pandya-led Gujarat Titans (GT). The winner of this battle will not only seal a playoff berth but also go to the top of the charts in IPL 2022 Points Table. Follow all the IPL 2022 live updates on InsideSport.IN While GT is coming on the back of consecutive losses, Lucknow Super Giants (LSG) will be looking to continue the winning momentum. The two newly-added IPL teams of 2022 currently have 16 points and one win will officially qualify them for the playoffs.

LSG, who have won their last four games, would be brimming with confidence as they head to the fixture with a morale-boosting 75-run win over Kolkata Knight Riders.

KL Rahul has led from the front and the opener is the second-highest run-scorer in the tournament, collecting 451 runs from 11 games with two hundreds and as many fifties.

The team has relied heavily on him to get the job done with the bat. But the likes of Quinton de Kock and Deepak Hooda have taken more responsibility in the recent games which will definitely take the pressure off Rahul. Their bowling unit has been right on mark. While LSG were able to defend 153 against Punjab Kings, they polished off KKR for just 101, with pacers Avesh Khan and Jason Holder proving to be too hot to handle for the former champions.

Pacers Mohsin Khan (5.35) and Sri Lanka’s Dushmantha Chameera (7.90) have bowled economically as has Krunal Pandya (6.64), while Ravi Bishnoi (8.23) and Avesh (8.14) have been a tad expensive. But the bowling unit has often found a way to get over the line.

Gujarat’s stellar run in the IPL can be attributed to their ability to come back from tough situations. They had different players winning games for them but that was not the case against MI when they failed to get nine runs off the last over in what should have been an easy run chase.

However, he can wreak havoc with the new ball while Ferguson’s ability to generate extra pace is a cause of concern for any batting line-up.

Rashid continues to remain economical but the star Afghan spinner will be eager for more wickets.