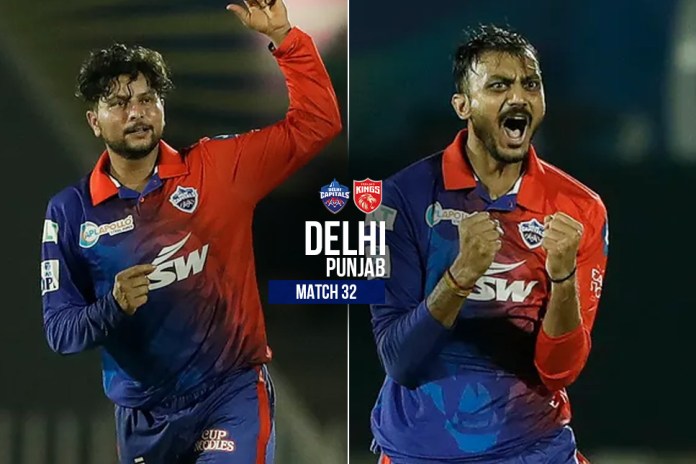 IPL 2022: Kuldeep Yadav Shares Man Of The Match Award with Axar Patel – In a season where players have found out their previous forms, Kuldeep Yadav certainly tops the list. The prized bowler who once was a vital member of the Indian National Team found himself away from the team after repetitive bad forms. But IPL 2022 has been a season of revelation for the spinner. Kuldeep not only claimed two important wickets to jump up on the purple cap standings but also showcased great character when he shared his Man of the Match award with fellow DC spinner Axar Patel. Follow IPL 2022 Live Updates on InsideSoport.IN

Yadav was a part of the KKR team last season but failed to retain his spot with the two-time champions. However, Delhi Capitals who instilled their trust in the spinner are now reaping the harvests, after these sensational performances from the spinner.

A Covid-19 stricken DC took to the field against Punjab Kings with very little practice but spitfire on the field despite missing their two foreign players, Mitchell Marsh and Tim Seifert. The bowling contingent of the Delhi outfits wreaked havoc on Punjab, as PBKS were bowled out after scoring a mere 115 runs at the conclusion of 20 overs.

“First of all, I would like to share this award with Axar Patel. He bowled very well and took some important wickets in the middle overs. I think we deserved it more. I have played with KG for a while and he does not move his foot so I planned that I will bowl a leg-spinner and then bowl a googly.”

It was really a grand gesture from Kuldeep who shared the award with Axar Patel. Both Axar and Kuldeep picked up 2 wickets apiece which was crucial for DC’s victory. Kuldeep picked up the wickets of Kagiso Rabada and Nathan Ellis in the same over with two exceptional deliveries.

Kuldeep disguised a tossed up googly to Rabada which the Proteas bowler mistook for a leg-break and attempted to defend it. The ball spun and landed on the stumps between the bat and pad to give Kuldeep the first wicket of the game. The second wicket was even special. Kuldeep switched to ball around the wicket, a tossed-up delivery for Ellis who misjudged the spin as the ball spins and lands on the stumps yet again.

“Ahead of the second wicket, Rishabh was telling me from bowling around the wicket and use the angle to get the wicket. To be very honest, I have gotten a lot of confidence from this IPL and there is mental clarity. I just focus on my line and lengths and do not think about what the batter is going to do.”

These two wickets were extremely crucial for Kuldeep who jumped a spot and rose to the No. 2 spot in the race for the purple cap. He currently has 13 wickets under his belt. The other half of KUL-CHA, Yuzvendra Chahal currently leads the race for the most wickets taken after having picked up 17 wickets.