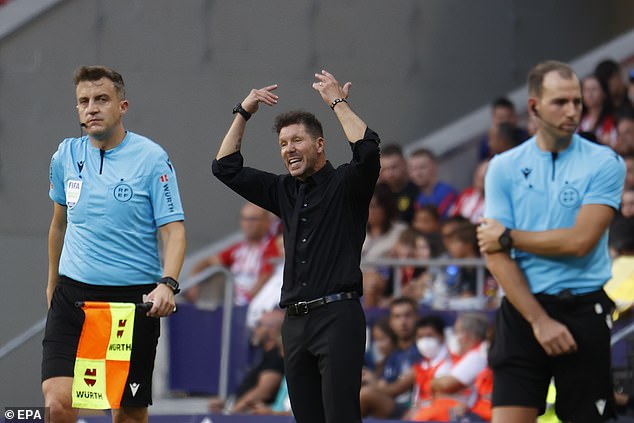 The second weekend of LaLiga saw Real Madrid continue their impressive start to the season as they beat Celta Vigo, while Barcelona returned to winning ways after thrashing Real Sociedad.

However, Diego Simeone’s Atletico Madrid slumped to a 2-0 home defeat against Villarreal and disgruntled supporters made their feelings known.

This week’s 10 things we learned by Sportsmail’s Pete Jenson from La Liga focuses on the promise of youth; the eternally young; and the age-old-problem of picking a team when the clock is ticking on a transfer window that could make or break a season.

1. Ansu Fati is the star

Last season was a write-off because of injury but Fati still has a long career ahead of him and for all the money Barcelona spent this summer he is still the special one.

He’ll be 20 in October, he wears the number 10, and while he’s never going to come close to the last player to wear that shirt, he has been touched by the same divine magic.

He came on in Barcelona’s 4-1 win over Real Sociedad on 64 minutes and by minute 79 he had assisted two and scored one. 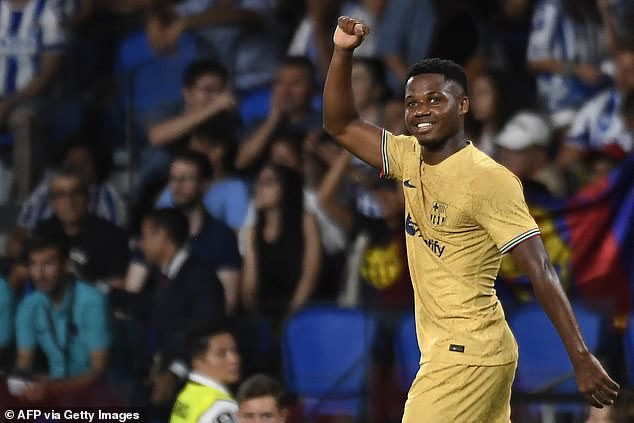 2. Modric is holding back the tide of time

The player who signed from Tottenham for 30m euros in 2012 appears to still be getting better which is remarkable in view of the fact that he will be 37 in two weeks.

His extraordinary performance against Celta Vigo was one of his best with his pass to release Vinicius to score only topped by his own goal. 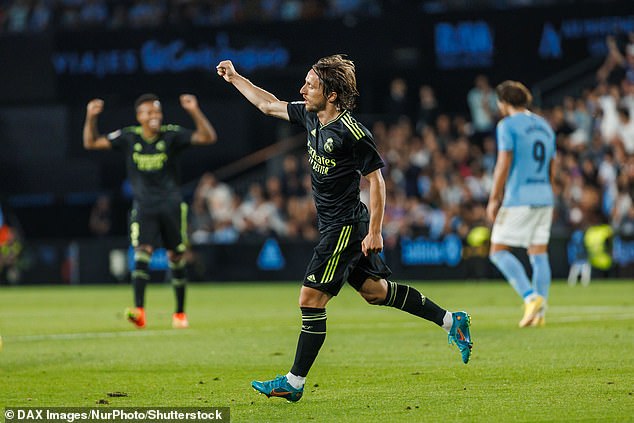 Even playing three centre-backs at the weekend and with Jules Kounde still not registered Pique watched the game from the bench.

Xavi has made it crystal clear that he is behind Andreas Christensen, Eric Garcia, Ronald Araujo and Kounde in the pecking order. Despite that, he’s not going anywhere. That’s in part because he believes he’ll end up as first choice, and in part because Barcelona owe him about 50m euros. 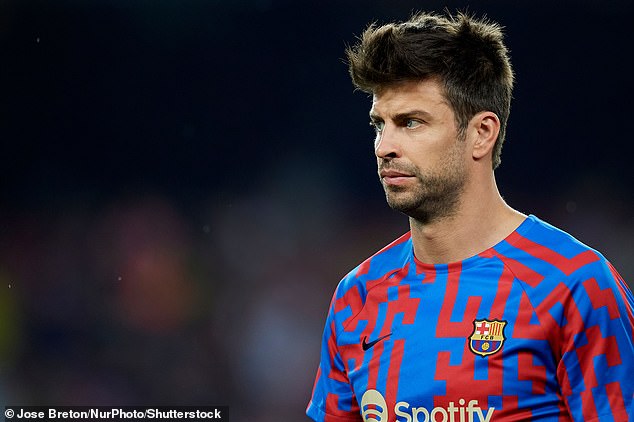 Isco only played 22 minutes but, depressingly for Sevilla fans, he turned in a shift that suggested he was ready for legends football.

He looks lean enough but there appeared to be very little fuel in the tank as he picked up a yellow for a arriving late to one challenge.

There is plenty of time for him to get match fit but it would have been nice for the coach Julen Lopetegui, who has saved his career by insisting on his signing, if he’d managed to do so before the season started. 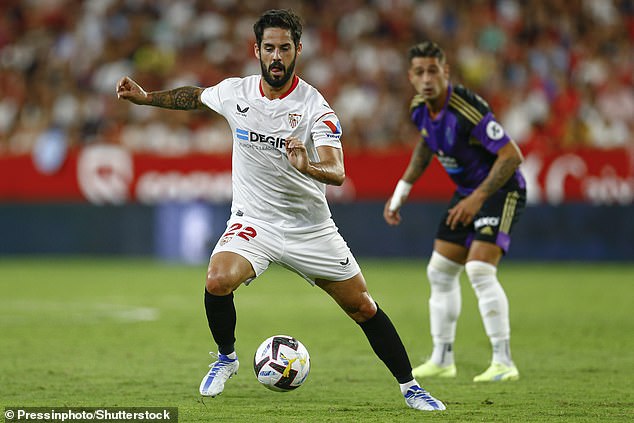 5. Lewandowski knows what time it is

The Polish striker had his £59,000 timepiece nicked in the entrance to the club’s training ground last week when a thief opened the door of his car as he stopped to sign autographs.

He wasn’t quick enough to catch the offender who was eventually apprehended by police. But he was quick enough to score twice on his 34th birthday. He got 50 goals last season, few doubt he’ll match that in this one. 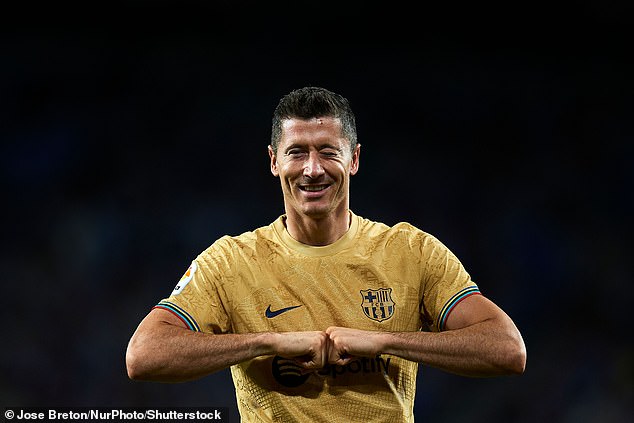 6. Griezmann is benched for non-football reasons

Antoine Griezmann has come on as a late substitute in the first two games of the season and as Spanish radio Cope explained perfectly post-match, there are non-football reasons why that is the case.

If he plays more than 45 minutes in 14 games this season then Atletico Madrid are bound by contract to sign him for 40m euros and give him two more years.

They can’t afford to and so for all that Diego Simeone might want to use him there are financial reasons why it’s seen as preferable that he doesn’t. 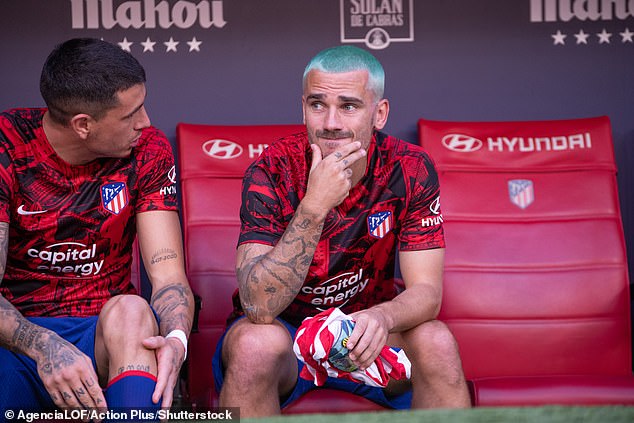 7. Casemiro is hard to replace but if you can spend 80m euros then maybe it’s not impossible

Aurelien Tchouameni wasn’t cheap but sometimes you get what you pay for. It’s a long season and Madrid will miss Casemiro at times for sure but the former Monaco midfielder has all the attributes to follow in the Brazilian’s footsteps.

Casemiro will get the club legend treatment on Monday with the 18 trophies he has won but Madrid are convinced that just as Marcelo ended up filling Roberto Carlos’ boots so Tchouameni can replace Casemiro. 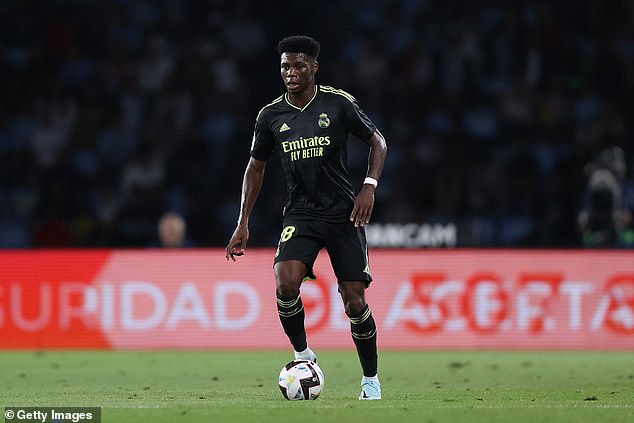 He had never beaten Diego Simeone in over a decade of trying but it all came right for him on Sunday.

Atletico didn’t like losing and Gerard Moreno was hounded by home team players when he scored the second and did his habitual into-the-camera goal celeb for his young daughter.

But Atletico had been schooled by Emery whose team left Simeone’s side with the initiative, waited for them to make a mistake, and then duly punished it. 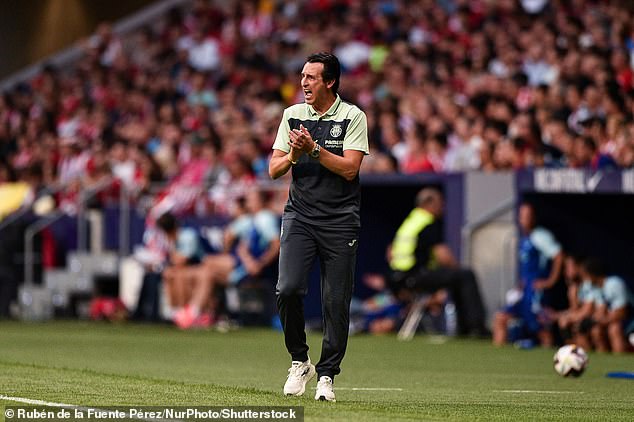 9. Chimy Avila knows how to take a penalty

Osasuna have scored three penalties in the first two games of the season and with three different scorers. But there is no question about the pick of the three being Chimy Avila’s.

He smashed his spot-kick, side-footed into the roof of the net from a straight run up. It was a thing of beauty, as was the sight of Osasuna’s supporters celebrating winning their first two games of the season for the first time in 40 years. 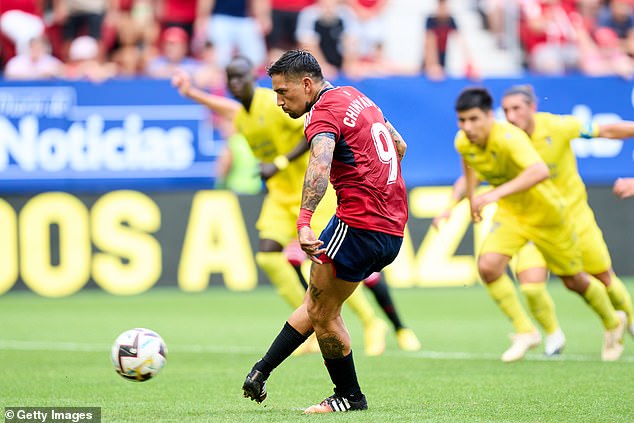 Chimy Avila smashed his spot-kick, side-footed into the roof of the net from a straight run up

10. Monchi and Alemany have a busy week ahead

Sevilla’s plan was not to spend any more money this summer but they have started the season poorly and last week Mexico winger Tecatito Corona broke his leg in training so now their director of football must move to bring someone.

Last January he sorted the loan of Anthony Martial they need something similar and they need it now.

Monchi won’t be the only busy body in the next seven days. Barcelona need to sell Pierre Emerick Aubameyang and Memphis to register Kounde and sign Marcos Alonso and that means there is no rest for Mateu Alemany.

Betis could also do with selling to register players. Don’t rule out movement at Villarreal too. And if there are offers for Marco Asensio or one of Atletico’s forwards even the Madrid clubs could do business. 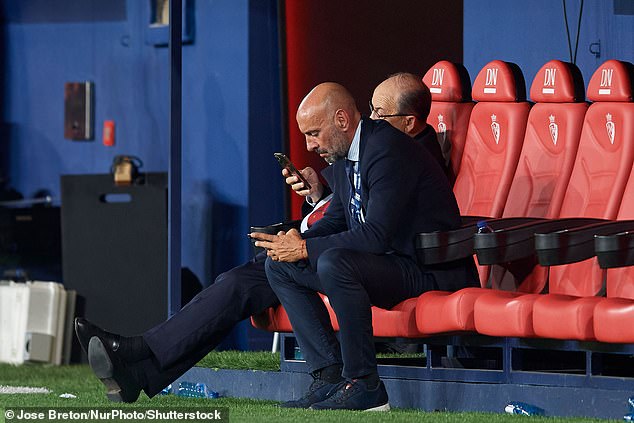