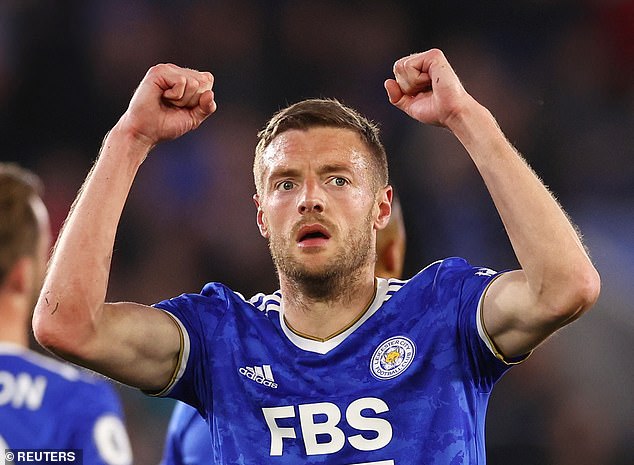 As he approaches a decade of service at Leicester City, Jamie Vardy proved he remains as hungry for goals as ever.

The 35-year-old struck twice against relegated Norwich early in the second half to lift the mood around the King Power Stadium and help his side climb into the top 10, with James Maddison adding a third against his former club.

‘I kept him on so he could try to get his hat-trick,’ said Leicester boss Brendan Rodgers. ‘He is older now so every minute counts – there might not be many more hat-tricks. He is such a brilliant guy, hungry. He was a threat all night. He fell on his wrist at the end but hopefully he’ll be OK.’ 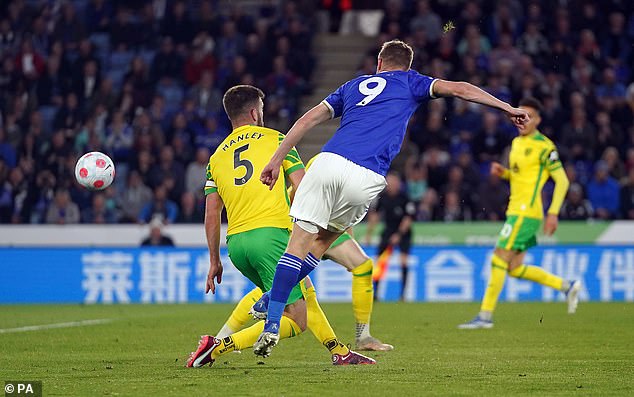 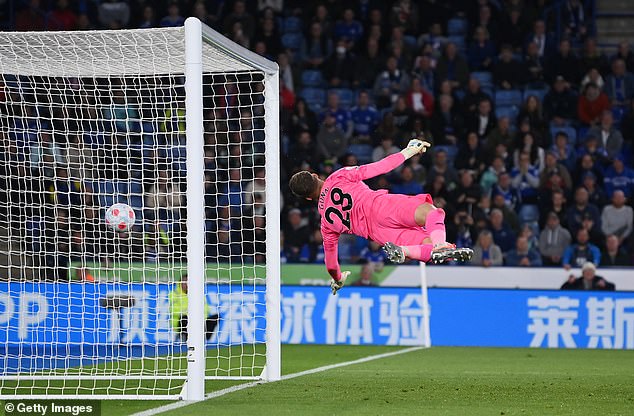 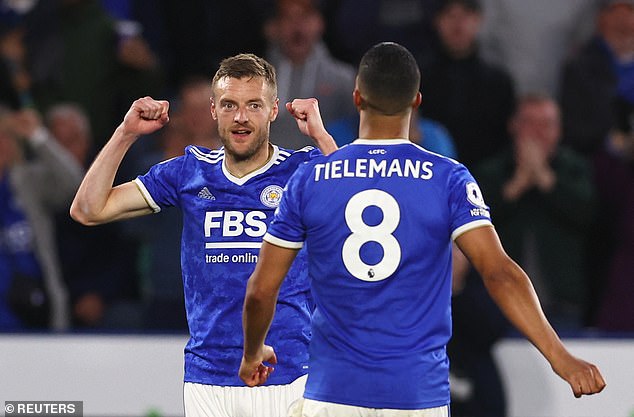 Man of the Match: Jamie Vardy

Leicester were booed off at half-time for the second game running and unusually, Rodgers chose to sit in the dugout – rather than stand in his technical area – for most of the second period.

This has been a disappointing domestic campaign for Leicester but it might have been so different had Vardy been fit throughout.

He was restored to the starting XI after the Foxes played poorly in losing 2-1 at home to Everton last weekend and he should have given them the lead in the 10th minute.

Maddison – back in the side after hamstring trouble – saw his powerful effort from 25 yards blocked by the recalled Angus Gunn, who also kept out the follow-up from Vardy. 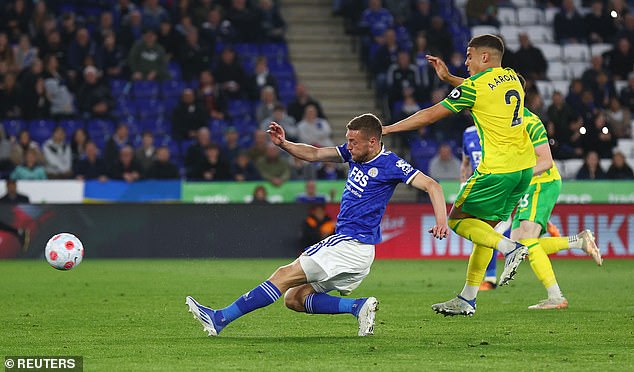 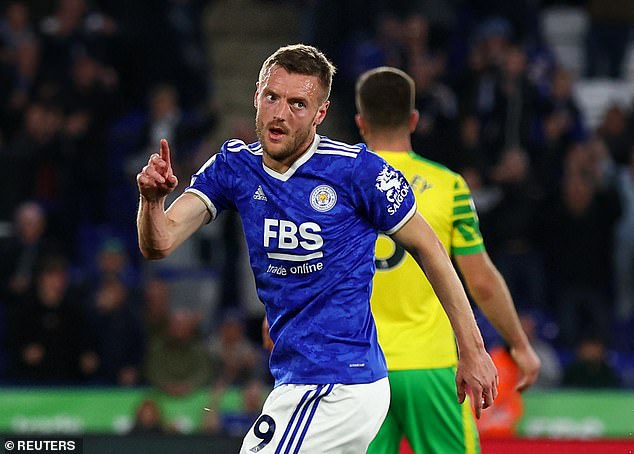 It was Vardy’s 12th Premier League goal of the season, helping Leicester dominate the game 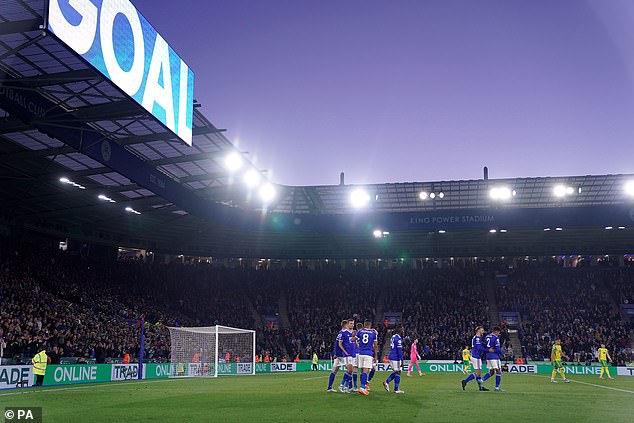 When Norwich broke following a Leicester corner, Kasper Schmeichel swept the ball away from Tony Springett and then saved from Teemu Pukki. Just before the half-hour, Gunn denied Ademola Lookman from six yards.

Leicester have conceded 23 goals from set pieces in all competitions this term, including 19 from corners alone.

So when the home side managed to clear Norwich’s first corner in the 39th minute, the home fans celebrated as though it were a goal.

And they were relieved again in stoppage time when Springett sent Pukki clear but the Finn hit the post. Leicester were booed off at the interval and for the second half, Rodgers brought on holding midfielder Nampalys Mendy for winger Lookman.

The home side looked more solid and took the lead in the 54th minute, albeit with a huge slice of luck. 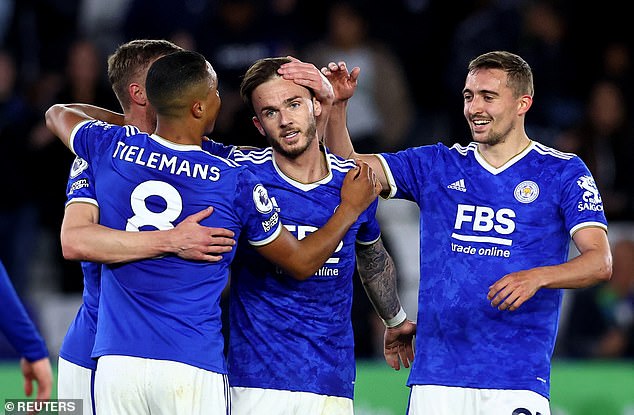 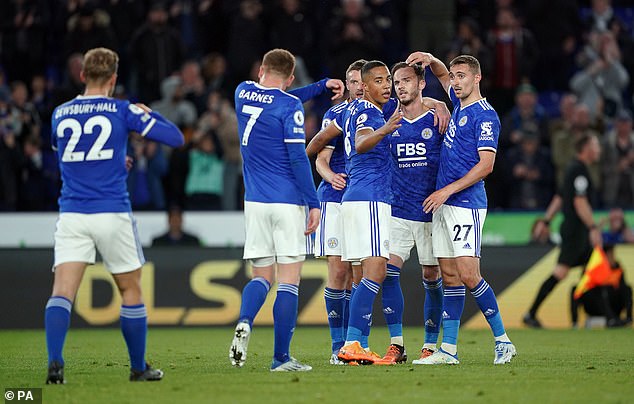 Harvey Barnes’ long pass sent Vardy away and when he shot, the ball clipped Grant Hanley and looped over the helpless Gunn.

It was Vardy’s first goal at home since November 28 and eight minutes later, he made it two. James Justin was quicker than Springett and found Barnes, whose pass was perfect for Vardy to send a rasping strike beyond Gunn.

Leicester’s third arrived when Gunn could only parry Dewsbury-Hall’s cross shot into the path of Maddison, who volleyed in his 15th of the campaign from 12 yards.

‘They upped the tempo after half-time and we found it difficult to live with that,’ admitted Norwich boss Dean Smith. ‘The first goal changed the game.’