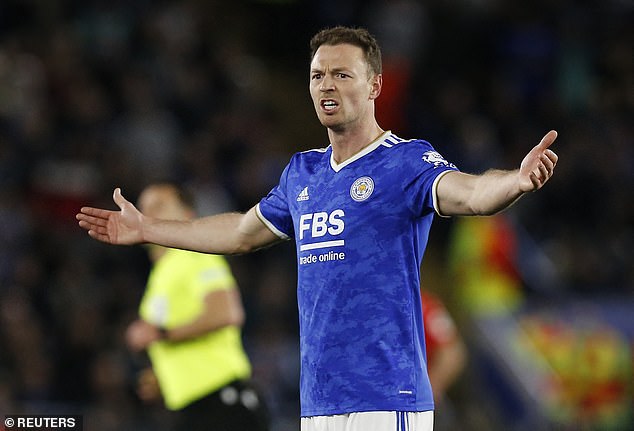 Leicester City were left to rue the near misses that mean they face a huge task against PSV Eindhoven next week to reach the first European semi-final in their history.

Kelechi Iheanacho shot wide with only the goalkeeper to beat and Harvey Barnes hit the post in the closing minutes of the half, meaning Leicester must prevail in Holland to progress to the last four of the Europa Conference League, though they also had fortune on their side when PSV were denied what looked a clear penalty, with VAR not in use until the Final.

PSV deserved at least a draw from an absorbing game, after Mario Gotze also went close early on. ‘It was a clear penalty,’ said PSV coach Roger Schmidt. ‘But I’m not a big fan of VAR so I can’t complain.’ 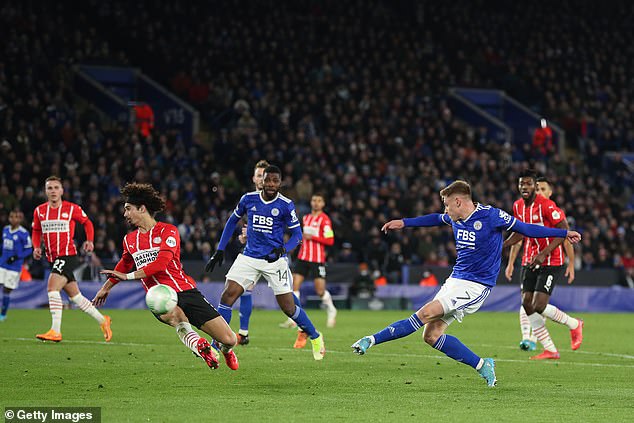 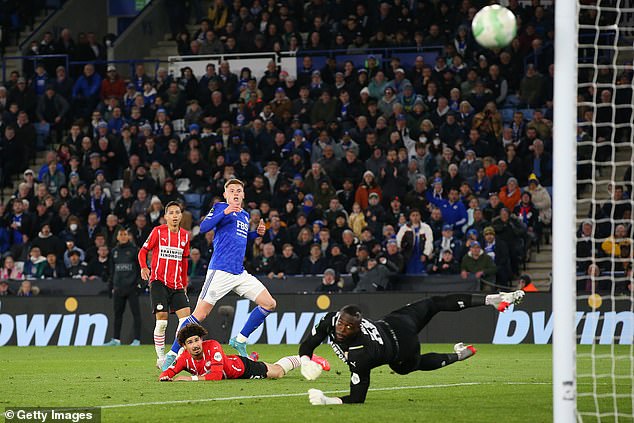 ‘Ricardo Pereira slipped and it looked like there was contact, though it looked accidental,’ admitted Foxes boss Brendan Rodgers.

‘Next week will be like a final. We have shown enough here to know we can go there and win. Hopefully we will get the job done.’

In their first home game since the statue of Vichai Srivaddhanaprabha was unveiled at King Power Stadium, Leicester would dearly have loved to honour the memory of their late owner with a victory.

With Jamie Vardy still out injured, Brendan Rodgers kept faith with Iheanacho in attack and James Maddison retained his place in the starting XI.

PSV are chasing glory on three fronts and should have taken the lead in the second minute.

Joey Veerman’s lofted pass picked out Gotze’s clever run only for the German – who scored the winner in the 2014 World Cup Final – to shoot against Kasper Schmeichel.

England Under-21 international Noni Madueke was causing plenty of problems for Leicester on the break, though the home side wasted a glorious chance in the 20th minute.

Kiernan Dewsbury-Hall charged down a pass from Veerman and the ball bounced kindly for Iheanacho. The Nigerian was clean through and lifted the ball over Yvon Mvogo but just wide.

Seconds before the break, Barnes played a one-two with Iheanacho and then hit a sweet left-footer that beat Mvogo but rebounded off the woodwork.

If that was an escape for PSV, the Dutch side were cursing their luck seven minutes after half-time.

When Gakpo wrong-footed Pereira and seemed to be caught inside the box, a penalty looked certain. 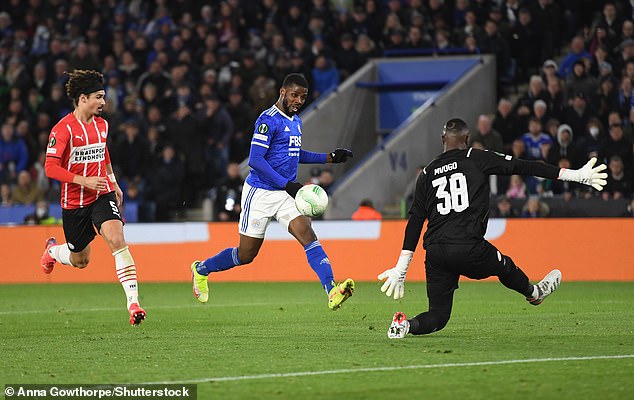 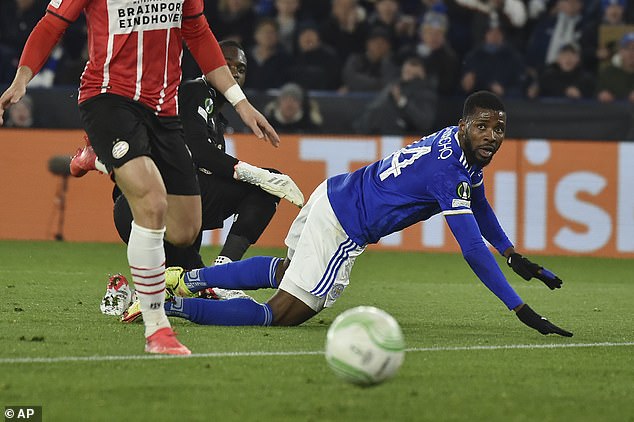 But the Nigerian striker could beat the PSV keeper, with both teams searching for the opener

Yet referee Ivan Kruzliak did not give one and there could be no second opinion.

At the other end, the excellent Dewsbury-Hall set up Barnes on the edge of the box for a shot that flew high and wide.

Though both sides were playing well, they lacked precision at the crucial moment. Dewsbury-Hall tricked his way into the box only for his cut-back to be blocked, before Iheanacho fired wide from 25 yards.

‘We should have done better with our chances,’ said Barnes. ‘If we take them in the second leg then we’ll get there.’ 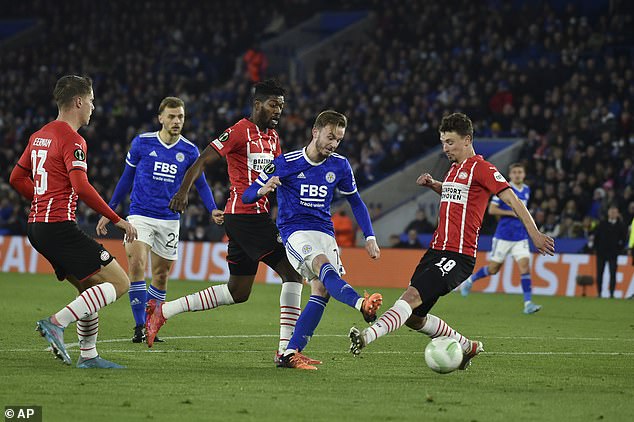